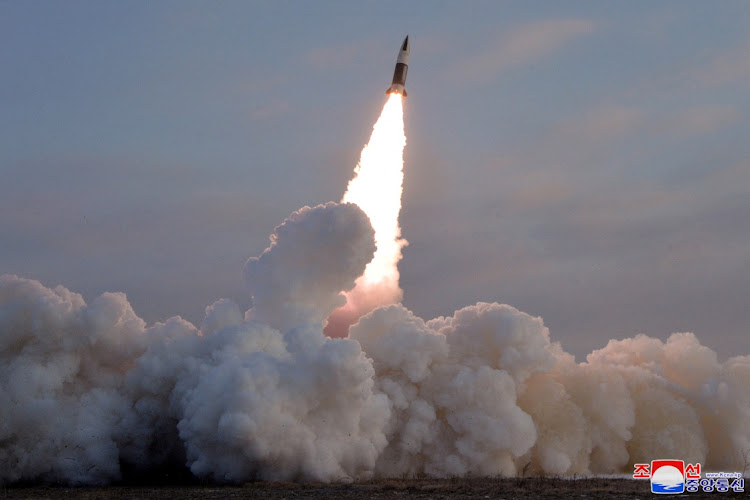 Seoul — North Korea fired what is thought to be an intercontinental ballistic missile (ICBM) towards the sea off its east coast on Thursday, militaries in South Korea and Japan said, in what would be the first full-capability launch of the nuclear-armed state’s largest missiles since 2017.

South Korea’s joint chiefs of staff said it had detected the launch of an “unidentified projectile” from North Korea. It said the launch was assumed to be a long-range missile, possibly an ICBM fired on a “lofted” trajectory high into space, Yonhap news agency reported.

South Korea’s ministry of defence did not immediately confirm whether the test involved an ICBM. North Korea has not tested such missiles at full range or capability since 2017.

Japan’s coast guard also said the launch could be a ballistic missile, adding that the projectile was expected to land inside Japan's exclusive economic zone (EEZ) about 50 minutes after its launch was first reported.

On March 16, North Korea launched a suspected missile that appeared to explode shortly after lift-off over Pyongyang, South Korea’s military said, amid reports that the nuclear-armed North was seeking to test-fire its largest missile yet.

The US and South Korea have warned in recent weeks that North Korea may be preparing to test-fire an ICBM at full range for the first time since 2017.

US officials have said that at least two recent tests, on February 27 and March 5, featured North Korea’s largest ICBM system yet, the Hwasong-17.

“The purpose of these tests, which did not demonstrate ICBM range, was likely to evaluate this new system before conducting a test at full range in the future, potentially disguised as a space launch,” a US official said at the time.

Pyongyang did not identify the missile system used in those launches, but said they were testing components for a reconnaissance satellite system. Leader Kim Jong-un said earlier in March that North Korea would soon launch multiple satellites to monitor military movements by the US and its allies.

Thursday’s launch would be at least the 13th ballistic missile test fired by North Korea in 2022, an unprecedented frequency that has drawn condemnation from the US, South Korea and Japan.

North Korea has not test-launched an ICBM since November 2017, which was a major breakthrough in Kim’s effort to show he could threaten the entire US ...
News
5 months ago
Next Article