Protesters mobilise to save secular India from Modi’s Hindu agenda 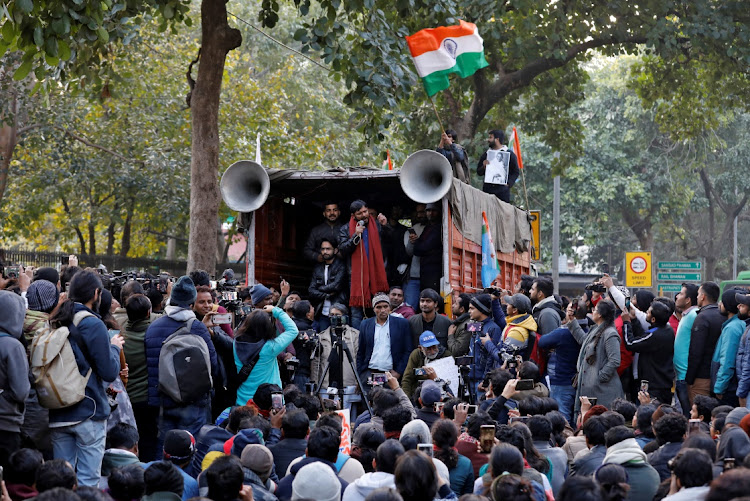 India’s left-wing youth leader, Kanhaiya Kumar, addresses people during a protest against the attacks on the students of Jawaharlal Nehru University, in New Delhi, India, on January 9 2020. Picture: REUTERS/ANUSHREE FADNAVIS

Mumbai/New Delhi — Standing on a stage in the centre of one of India’s most prestigious universities, the firebrand politician looked out at the cheering supporters before him and issued a sharp challenge to Prime Minister Narendra Modi.

“The idea of India is under threat,” said Kanhaiya Kumar, a leftist politician from the northeastern state of Bihar, his voice rising in the cold evening air. “We will not stop. Let the government use force. Let them bring the police.” He paused. “We will rise to prove them wrong. Listen, Modi!”

The 33-year-old Bihari politician has emerged in recent weeks as a major irritant and political challenge to Modi, a Hindu nationalist who has faced escalating protests over a citizenship law he introduced in December 2019. Critics say the law, the Citizenship Amendment Act, marginalises India’s Muslim minority and undermines the country’s secular ethos.

There is no single leader in the protests, which are sweeping university campuses and which some students say are inspired by the leaderless antigovernment protests in Hong Kong. But a recording of Kumar’s “Freedom” anthem is played at almost all of them, with the crowds joining in for the chorus.

Modi has won back-to-back national elections with strong majorities, and the Communist Party of India faction that Kumar leads has little clout nationally. But a senior aide to the prime minister says the government is worried that his prominence and messaging could undermine Modi’s policies and weaken him politically.

Kumar’s message has largely focused on accusations that Modi has failed to deal with rising unemployment and create jobs for millions of young Indians, and that his hardline pro-Hindu policies are undermining the country’s secular identity and making life difficult for minorities such as Muslims.

When asked about his policies in a telephone interview with Reuters, Kumar declined to make “political promises” beyond pledging to uphold the constitution, saying his main aim was to hold the government to account. “Let us not forget Modi has used religion to accentuate the fault lines, and he has failed to create jobs. I don’t want anyone to forget this,” said Kumar.

While analysts say that Kumar’s rise does not immediately threaten Modi, it could provide a basis for a resurgence of the opposition parties that were trounced by the prime minister’s Bharatiya Janata Party (BJP) in the national elections in May. Several political parties, including the main opposition Congress party, have tried to enlist Kumar to their camps, but he has so far been noncommittal.

“His presence widens the scope for the fragmented opposition to unite in the near term to dent Modi’s governing style,” said Sanjay Kumar, director of the Centre for the Study of Developing Societies, an independent research institute in Delhi.

Kanhaiya Kumar’s speech at Jawaharlal Nehru University (JNU), which has been rocked repeatedly by clashes between opponents and proponents of the new law, attracted hundreds of supporters on January 7. But his words have resonated far beyond the gates of JNU’s leafy campus. 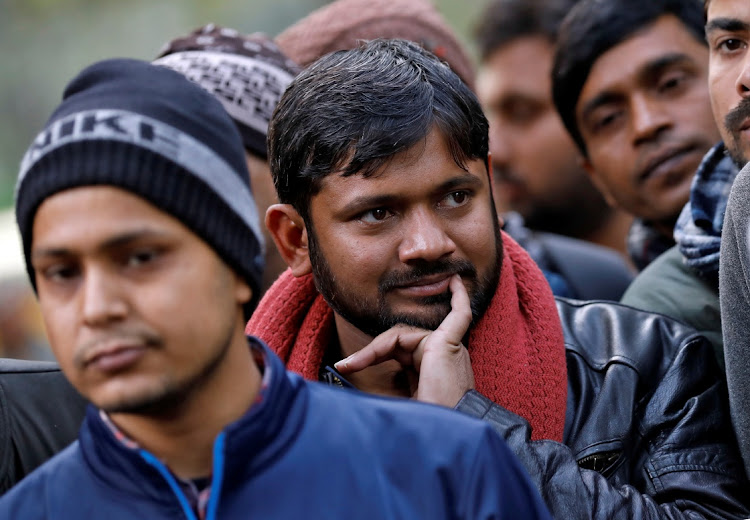 Kumar’s speeches are watched avidly by his supporters — he has about 2-million YouTube subscribers and a million Twitter followers — and his anti-Modi slogans are chanted at protests across the country. While he has been a well-known critic of the Modi government for several years, the recent protests have put him at centre stage in the fragmented and weakened political opposition.

“Kumar is unique and forces everyone to think and question. He has been able to fill the gap created by absence of opposition,” said Sanjay Kumar of the Centre for the Study of Developing Societies.

While they are separated in age by almost four decades, Kumar has much in common with Modi, who is 69. Both come from humble backgrounds, are skillful orators and are firmly committed to their political ideologies.

Modi is the son of a roadside tea seller; Kumar’s father was a farmer and his mother works for a rural childcare centre in Bihar, one of the most populous but also poorest states in India. Kumar did well at school, and was able to attend university in Patna, the state capital, where he studied geography and got involved in student politics.

He was later admitted to JNU, which has a reputation for leftist politics, and earned a doctorate in African studies and became president of the student council. It was also at JNU that Kumar first shot to national prominence. In 2016, he was arrested at an on-campus rally and charged with sedition for allegedly shouting anti-India slogans.

In an interview with Reuters, Kumar denied the charges and said Modi’s government is trying to muzzle dissent. The courts have yet to begin hearing in the case.

“My critical thinking and ability to question Modi’s hard-line Hindu policies have scared the government since 2016,” Kumar said. “Now, I am not alone. More and more people are joining our movement against Modi.”

Kumar ran for a parliamentary seat from Bihar in the national elections in 2019, but was defeated by a candidate from the BJP, which is allied with the socialist party that dominates the politics of the state. Since then, he has been travelling across India to spread his political views and mobilise grass roots followers.

Kumar’s appeal to young and first-time voters has worried Modi, the aide to the prime minister said on condition of anonymity. “We watch him closely,” he said. The government is also closely tracking Kumar’s personal life and his funding, the aide said, without elaborating.

The prime minister’s office and the home ministry did not respond to repeated requests from Reuters for comment on Kumar.

Protests against the Citizenship Amendment Act have raged across India since December 2019. At least 25 people have died and thousands of protesters have been arrested. The new law eases the path for people from Afghanistan, Bangladesh and Pakistan to gain Indian citizenship, but only non-Muslims. Critics fear the law will be used to discriminate against Muslims in India, one of many measures issued by Modi’s Hindu nationalist government that they fear is chipping away at India’s secular constitution.

Modi’s government maintains that the new law is necessary to help minorities facing persecution in Muslim-majority nations, and it has called the pan-India protests politically motivated. But Kumar said the protests are just one part of a larger drive to protect India’s secular identity, which is guaranteed by the constitution.

Modi’s critics say they are growing increasingly uneasy with his Hindu agenda, which appears to have gained emphasis since he was re-elected in May. In November, a Supreme Court decision handed Hindu groups control of a contested site where a 16th-century mosque was razed by Hindu zealots in 1992. In August, the government stripped the Muslim-majority state of Jammu and Kashmir of its special status and split it into two federally administered regions.

“The essence of India is at stake like never before,” said Kumar.

Indefinite suspension of the internet violates India’s telecoms rules, the court said, and disrupts the lives of millions
World
1 year ago

The demonstrations against the citizenship law have been the first real test of the prime minister’s rule — and he isn’t faring so well, say critics
World
1 year ago

India steps up security and shuts internet amid citizenship riots

India steps up security and shuts internet amid citizenship riots