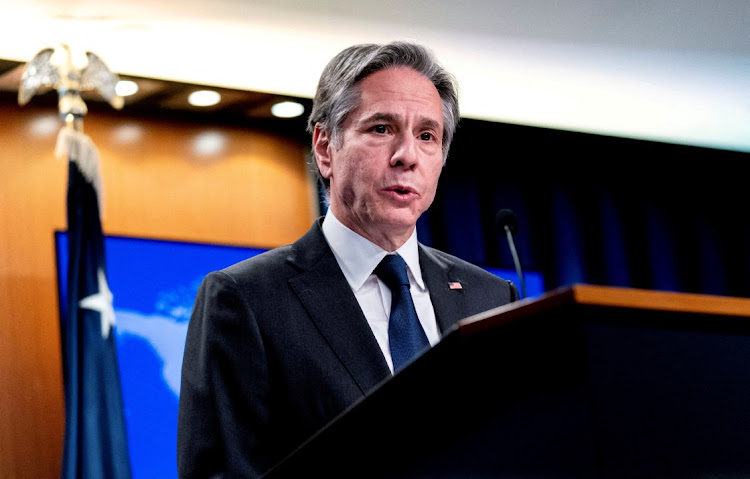 US secretary of state Antony Blinken speaks in the briefing room of the state department in Washington, the US. Picture: ANDREW HARNIK/REUTERS

Washington — US President Joe Biden’s top diplomat will visit Kyiv this week after talks with Russia ended in a stalemate last week amid concerns in the US and other Western nations that Moscow is preparing to again invade Ukraine.

US secretary of state Antony Blinken will meet Ukrainian President Volodymyr Zelenskiy and foreign minister Dmytro Kuleba on Wednesday, the US state department said on Tuesday.

Blinken then heads to Berlin to meet German foreign minister Annalena Baerbock, followed by a meeting with the Transatlantic Quad, the department said in a statement, referring to a format that involves the US, Britain, France and Germany.

Blinken will “discuss recent diplomatic engagements with Russia and joint efforts to deter further Russian aggression against Ukraine, including allies’ and partners’ readiness to impose massive consequences and severe economic costs on Russia,” it said.

Biden has warned of severe economic consequences for Moscow if Russia, which has massed troops near Ukraine’s borders, invades its neighbour. Russia, which invaded Ukraine in 2014, has denied any plans for a fresh attack but has made several demands and said it could take unspecified military action unless the West agrees to them.

Ahead of his trip, Blinken spoke with Russian foreign minister Sergei Lavrov on Tuesday and urged de-escalation, the department said in a separate statement.

Lavrov separately said Moscow would welcome US diplomatic efforts and reiterated Russian accusations that Ukraine was “sabotaging” agreements aimed at ending the conflict between Ukrainian government forces and pro-Russian separatists in eastern Ukraine.

Germany’s Baerbock, in Moscow for talks with her counterpart, on Tuesday said her country was ready to pay a high economic price to defend its fundamental values in the Russia-Ukraine conflict.

Chancellor Olaf Scholz has signalled that Berlin’s response might include stopping the Nord Stream 2 pipeline bringing gas to Germany. Asked about the pipeline after meeting Stoltenberg, Scholz said this week it was “clear that there will be a high price to pay and that everything will have to be discussed should there be a military intervention in Ukraine”. Scholz has previously said Germany is open to sanctions in the event of a Russian attack and that everything would be on the table. This would include Nord Stream 2, which has been built but has not yet secured approval to open.

Also on Tuesday, Canadian foreign minister Melanie Joly condemned Russia’s troop build-up near Ukraine and said Ottawa would take a decision at the appropriate time on supplying military hardware to Ukraine. Speaking alongside Ukrainian counterpart Dmytro Kuleba at a briefing during a visit to Kyiv, Joly said any new offensive by Russia would incur serious consequences.

Kyiv has sought weapons from Western nations to shore up its defence. On Monday, Britain said it had begun supplying Ukraine with anti-tank weapons to help it defend itself.

Despite shelling and gunfire from Kremlin-backed separatists, locals are confident there will be no invasion
News
4 months ago

US warns Russian actors are preparing potential sabotage ops against their own forces and fabricating provocations in social media to justify an ...
News
4 months ago

Hacks were aimed at destabilising the country, according to findings of a joint probe of state agencies
World
4 months ago