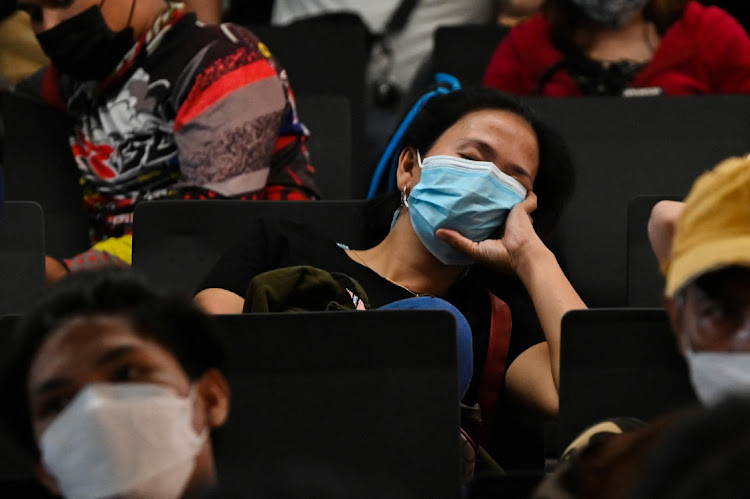 A woman wearing a face mask as protection against the coronavirus disease waits to ride a bus going to provinces, a day before the New Year's Eve, at a bus terminal in Paranaque City, Metro Manila, Philippines, on December 30 2021. Picture: REUTERS/LISA MARIE DAVID

Mumbai/Rome — Covid-19 will stifle New Year celebrations around the world for the second year running on Friday, with governments in many countries hurriedly scaling back festivities in an effort to contain rampant contagion.

Global coronavirus infections hit a record high over the past seven-day period, with almost one-million cases detected on average each day worldwide between December 23 and 29, some 100,000 up on the previous peak posted on Wednesday, according to Reuters data.

Numerous nations registered all-time highs during the previous 24 hours, including Argentina, Australia, Bolivia, the US, France and Italy, as the all-conquering Omicron variant spread like wildfire.

Though studies have suggested it is less deadly than some previous variants, many health authorities were taking no chances, telling people the best way to see in 2022 was at home with very few guests — preferably all vaccinated.

In Europe, where almost one-million people have died of coronavirus over the past 12 months, traditional concerts and firework displays that typically draw thousands of people on to the streets were cancelled in most major cities, including London, Paris, Zurich, Brussels, Warsaw and Rome.

“It is being seen that social gatherings are going on in an unrestricted manner with people flouting all social distancing norms,” said Rajesh Tope, the health minister of the western state of Maharashtra of which Mumbai is the capital.

However, despite spiking cases, some places are ploughing ahead with events regardless, including Sydney, the first major city to usher in the New Year, which is hosting its annual fireworks spectacular over the Opera House and Harbour Bridge.

Last year, the state banned crowds from attending the fireworks, when case numbers were in the low 100s, compared with more than 12,000 new infections reported on Thursday.

Likewise, New York said it would hold its Times Square party, albeit in a scaled-back version, with far fewer people allowed to watch as the iconic, giant ball drops down a pole to mark the arrival of 2022.

US infectious disease official Dr Anthony Fauci said on Wednesday that family gatherings where everyone was vaccinated should be all right, but cautioned that large-scale parties were still too dangerous.

“If your plans are to go to a 40-to-50-person New Year’s Eve party with all the bells and whistles, and everybody hugging and kissing and wishing each other a happy new year, I would strongly recommend that this year we do not do that,” he said.

Many people have taken the warnings to heart, leaving restaurants and hotels to count the cost of mass cancellations.

Almost two years into the pandemic, the regularly mutating coronavirus is forcing governments to rethink quarantine and test rules
World
4 weeks ago