Coronavirus infections have soared wherever the highly infectious Omicron variant has spread, triggering new restrictions in many countries and record new cases 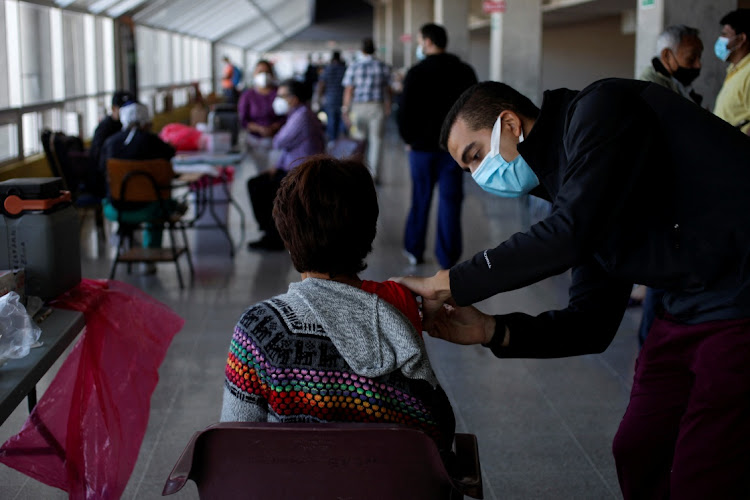 A woman receives a booster dose of a coronavirus disease (COVID-19) vaccine as the country seeks to counter the threat posed by the Omicron variant of the virus, at the sports center of the National Autonomous University of Honduras (UNAH) in Tegucigalpa, Honduras December 23 2021. Picture: REUTERS/FREDY RODRIGUEZ

Omicron advanced across the world on Thursday, with health experts warning the battle against the Covid-19 variant was far from over despite two drugmakers saying their vaccines protected against it and signs it carries a lower risk of hospitalisation.

Coronavirus infections have soared wherever the highly infectious Omicron variant has spread, triggering new restrictions in many countries and record new cases.

But in another glimmer of hope two days before Christmas, a US Federal Drug Administration (FDA) official said data indicated that both Merck s and Pfizers Covid-19 antivirals are effective against the variant.

There were encouraging signs too about hospitalisation rates from Britain and SA, though the head of a leading African health agency joined the World Health Organisation in cautioning that it was too soon to draw broader conclusions.

“Let’s be careful not to extrapolate what we are seeing in SA across the continent, or across the world,” Africa Centres for Disease Control (CDC) chief John Nkengasong said.

Nevertheless, US stock indexes and yields on US Treasuries both climbed on Thursday, partly on new optimism after Omicron helped ratchet up market volatility for much of the last month of 2021.

“Today (Thursday) is a very calm day. It’s the relief over Omicron apparently not being as bad as we feared,” Ryan Detrick, chief market strategist at LPL Financial said.

Even as Omicron has begun leaving an imprint on parts of the US economy, economists say it so far seems unlikely to prevent a second straight year of above-trend growth.

First identified last month in Southern Africa and Hong Kong, Omicron is becoming dominant in much of Europe including Britain where daily new infections have soared beyond 100,000.

France had its worst-ever day in terms of new Covid-19 cases on Thursday, with more than 91,000 recorded, while Germany reported its first Omicron death.

In Italy, the first Western country to be hit by the pandemic last year, all public New Year’s Eve celebrations were banned, while Greece banned public Christmas festivities. Both countries also made outdoor mask-wearing mandatory.

In the US, millions of Americans pushed ahead with holidays including cross-country flights. Authorities said 2,081,297 passengers were screened through the nation’s airports on Wednesday, 144,000 more than on the same date in 2019 before the pandemic.

Increases in hospitalisations and deaths in SA and Britain since Omicron took hold appear to have been only gradual, and AstraZeneca and Novavax joined other manufacturers in saying their shots protect against it.

University of Edinburgh researchers who tracked 22,205 Omicron patients said on Wednesday the number who needed to be hospitalised was 68% lower than they would have expected, based on the rate in patients with Delta.

Britain recorded a record number of new coronavirus cases on Thursday, with the daily tally reaching 119,789. But analysis of preliminary data by the UK Health Security Agency (UKHSA) showed an individual with Omicron was estimated to be between 31% and 45% less likely to attend hospital compared to someone with Delta, and 50% to 70% less likely to be admitted.

UKHSA boss Jenny Harries said this was “an encouraging early signal”, but added: “this is early data and more research is required to confirm these findings”.

In Washington, the FDA authorised Merck’s antiviral pill for certain high-risk adult patients, a day after giving the go-ahead to a similar treatment from Pfizer.

Both pills worked, said Patrizia Cavazzoni, a top FDA official, adding that both interfere with how the virus replicates, a process that is not altered across variants.

Scientists have warned that, with the surge in cases in Britain, even a small proportion of hospitalisations could overwhelm the healthcare system.

In the US Midwest, Omicron’s rapid spread has hospitals “preparing for the worst,” with their personnel already severely strained from a wave of the Delta variant.

A separate South African government-backed study, yet to be peer-reviewed, on health workers given the Johnson & Johnson vaccine identified “clear and early decoupling” of hospitalisation from Omicron cases compared with Delta.

AstraZeneca said a three-course dose of its vaccine offered protection against the variant, citing data from an Oxford University lab study.

Findings from the study, yet to be published in a peer-reviewed journal, matched those from rivals Pfizer-BioNTech and Moderna.

Novavax also said early data showed its vaccine — authorised for use by the European Union and WHO but yet to be approved by the US — generated an immune response against Omicron.

But the older Delta variant lurks.

The coronavirus death toll in Russia, where officials had detected only 41 Omicron cases, passed 600,000 on Thursday, Reuters calculations based on official data showed, after a surge of Delta-linked infections.

Only the US and Brazil have recorded more coronavirus deaths.

Data from SA which suggests Omicron is 70% to 80% less severe than Delta should not be extrapolated to all countries, the Africa Centres for Disease ...
World
1 month ago

India has recorded 236 Omicron cases across 16 states over the last 24 hours, more than double from last week
World
1 month ago

Province was one of the first to experience a surge in infections in November, largely driven by the Omicron variant, but seven-day daily average now ...
National
1 month ago