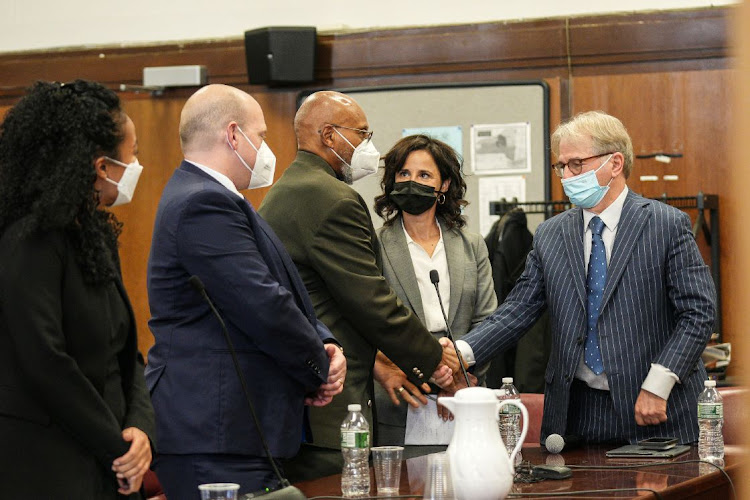 Muhammad Aziz, 83, one of the two men who spent decades in prison for murdering black activist and civil rights advocate Malcolm X in 1965, shakes hands with lawyers during his exoneration trial by a New York state judge in New York City, the US, November 18 2021. Picture: CURTIS MEANS/REUTERS

New York  — More than 50 years after the assassination of Malcolm X, two men who spent decades in prison for murdering the black activist and civil rights advocate were exonerated on Thursday by a New York state judge.

A Manhattan judge dismissed the convictions of Muhammad Aziz, 83,  and the late Khalil Islam after the district attorney said evidence had been withheld in the case and apologised for “violations of law and public trust.”

Islam  died in 2009. Both were released from prison on parole in the 1980s after maintaining their innocence from the start of the trial. Aziz and two of Islam's sons were present in the court on Thursday.

“The event that has brought us to court today should never have occurred,” Aziz, told the court.

Manhattan district attorney Cyrus Vance told the court that new exculpatory evidence uncovered during a two-year investigation had made it clear that Aziz and Islam were wrongfully convicted for murdering Malcolm X.

The third man, Mujahid Abdul Halim, admitted to shooting Malcolm X and was also sentenced to life in prison. He had said during the trial that Aziz and Islam were not involved, reports said.

The evidence included documents that investigators withheld from both defence and prosecution in Aziz and Islam’s case, according to Vance. “I apologise for what were serious, unacceptable violations of law and the public trust,” he said.

Malcolm X was the voice of the radical Nation of Islam, but near the end of his life he split with the black Muslim group and, after a trip to Mecca, started to call for racial unity.

Applause broke out in the court as Biben overturned the  convictions, after saying she regretted that the court could not give Aziz and Islam back the years they had lost due to the wrongful convictions.

Two men convicted of Malcolm X assassination to be exonerated

Clearing Muhammad Aziz and Khalil Islam in one of the highest-profile murders of the US civil rights era will represent an official acknowledgement ...
World
8 months ago
Next Article