Walmart, FedEx and UPS plan to step up their operations to speed up the shipment of goods across the US 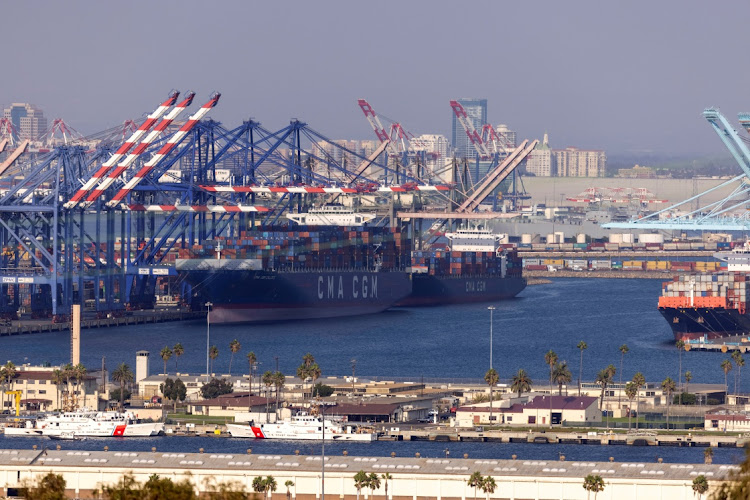 The congested Port of Los Angeles in San Pedro, California, the US, September 29 2021. Picture: MIKE BLAKE/REUTERS

Washington  — US President Joe Biden on Wednesday urged the private sector to help ease supply chain blockages that are threatening to disrupt the US holiday season and said the White House plans a nationwide overhaul of the clogged system.

Biden said the Port of Los Angeles would join the Port of Long Beach, two of the country's busiest, in expanding round-the-clock operations to unload about 500,000 containers waiting on cargo ships offshore.

Walmart, Target and other big retailers would also expand their overnight operations at the ports to try to meet delivery needs, Biden said.

It is a “big first step” to revamping supply chains in the US, the world's biggest consumer market, Biden said, adding the government would be heavily involved.

“If federal support is needed, I'll direct all appropriate action, and if the private sector doesn’t step up, we’re going to call them out and ask them to act,” the president said in remarks at the White House.

The broader goal, he said, is to address long-standing weaknesses in the US supply chain.

The stop-and-start nature of the pandemic has snarled global supply chains that are optimised for just-in-time movements of goods.

The supply crisis is driven in part by the global Covid-19 pandemic, as sales of durable goods jumped amid worker shortages and transportation hub slowdowns. A shortage of warehouse workers and truck drivers to pick up goods is partly to blame.

Lower-than-expected Christmas sales could hurt US companies and pose a political risk for Biden, who is already battling a host of other domestic problems in his first year in office.

The latest Reuters/Ipsos poll shows the economy continues to be the most important issue for Democrats and Republicans alike.

White House officials have said that Americans may face higher prices and some empty shelves this Christmas  season due the supply chain problem.

White House spokesperson Jen Psaki told reporters Biden could not guarantee there would be no holiday disruptions.

“What we can do is use every lever at the federal government level to reduce delays,” she said, when asked about the possibility of mobilising National Guard or other troops.

All hands on deck

Besides the stepped-up port activity, three large carriers of goods — Walmart, FedEx and UPS — plan to step up their round-the-clock operations to speed the shipment of goods across the country.

Samsung, Home Depot and Target are also increasing their work in off-peak hours.

The White House expects the pledges from the six companies to expand their hours will amount to 3,500 additional containers moving each week through the end of the year. Biden spoke after meeting with executives from the two ports as well as from the International Longshore and Warehouse Union, the Teamsters, the AFL-CIO, Walmart, FedEx, UPS, Target, the National Retail Federation, the American Trucking Association, the Pacific Maritime Association, and more.

Some CEOs scheduled to attend noted they are already working around-the-clock. “We’ve been running 24/7 supply chain operations for years, including at the ports,” said Target CEO Brian Cornell in a blog post ahead of the meeting.

Target handles about 50% of its containers that arrive in California ports at night, he wrote, and is committed to increasing that amount by 10% over the next 90 days.

The Consumer Brands Association urged the White House to set up a supply chain war room and bring in private sector experts and government officials to help rapidly identify problems.

The White House has been trying to tackle inflation-inducing supply bottlenecks of everything from meat to semiconductors. The administration formed a task force in June that meets weekly and named a “bottleneck” chief, John Porcari, to push private sector companies to find ways to get goods flowing.