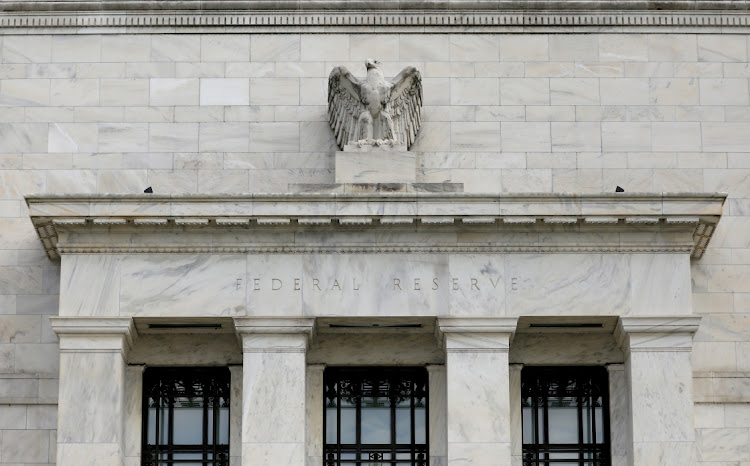 The Federal Reserve building in Washington, DC, the US. Picture: REUTERS/CHRIS WATTIE

Washington — Federal Reserve officials held interest rates near zero but signalled they expect two increases by the end of 2023, pulling forward the date of lift-off as the economy recovers.

“Progress on vaccinations has reduced the spread of Covid-19 in the US,” the federal open market committee (FOMC) said in a statement released on Wednesday following the conclusion of its two-day policy meeting. “Amid this progress and strong policy support, indicators of economic activity and employment have strengthened.”

The central bank held the target range for its benchmark policy rate unchanged at zero to 0.25% — where it’s been since March 2020 — and pledged to continue asset purchases at a $120bn monthly pace until “substantial further progress” had been made on employment and inflation.

The quarterly projections showed 13 of 18 officials favoured at least one rate increase by the end of 2023, versus seven in March. Eleven officials saw at least two hikes by the end of that year. In addition, seven of them saw a move as early as 2022, up from four. The FOMC vote was unanimous.

The US economic recovery is gathering strength as business restrictions lift and social activity increases across the country. Robust demand from consumers and businesses alike has outstripped capacity, leading to bottlenecks in the supply chain, longer lead times and higher prices. At the same time, employment growth has disappointed over the past couple of months.

Fed officials have said such “fits and starts” are to be expected given the unprecedented nature of the pandemic and expressed optimism about the outlook for the second half of the year as more Americans get vaccinated.

Labor department reports on employment published since the last gathering of the US central bank’s policy-setting FOMC in late April have disappointed relative to forecasters’ expectations. The US unemployment rate was still elevated at 5.8% in May, with total employment still millions of jobs below pre-pandemic levels.

Consumer-price pressures, on the other hand, have proven hotter than expected. Department figures showed a 0.8% jump in prices in April and a 0.6% rise in May, marking the two biggest monthly increases since 2009.

Retailers led the gains on the JSE, while miners fared worst on the day
Markets
3 months ago