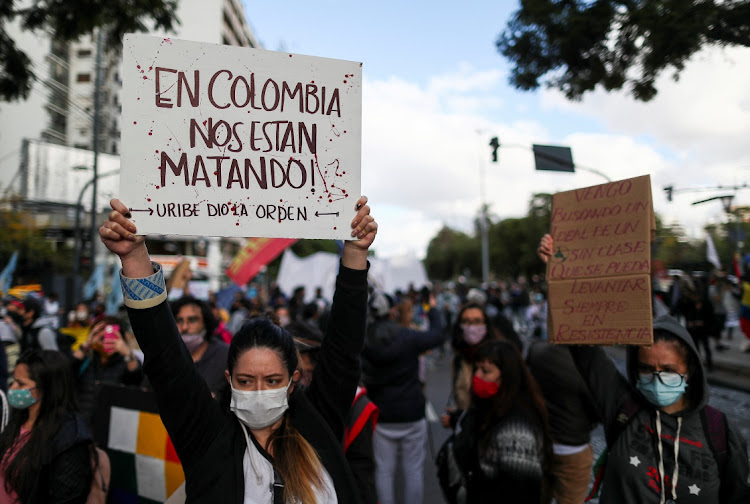 A demonstrator holds a placard that reads ‘In Colombia they are killing us’, during a protest against police brutality, outside the Colombian consulate in Buenos Aires, Argentina, May 4 2021. Picture: REUTERS/AGUSTIN MARCARIAN

Colombia’s new finance minister struck a conciliatory tone as violent protests continued across the country, saying he would seek to build consensus around a proposal to shore up the budget without resorting to the types of tax hikes that have stirred the unrest.

Jose Manuel Restrepo took the reins of the Colombian economy after his predecessor was forced to resign, and sought to convey a message of financial stability as investors sent the peso and government bonds lower. He promised to come up with a new plan that would curb spending while raising 14-trillion pesos ($3.7bn) in revenue without relying on broad-based tax increases.

“There are some points where a consensus can be reached,” he said in a radio interview on Tuesday. What’s needed is “a constructive dialogue, and to understand the importance of the adjustment that Colombia needs”.

He spoke as demonstrations raged in major cities and small towns alike, with protesters blocking roads and squaring off with lines of police in riot gear. The number of people out in the street appeared down slightly from previous days, but deadly clashes between protesters and police broke out overnight in the city of Cali and blockages across the country raised fears that food supplies will be affected.

Colombia’s human rights ombudsman said 18 civilians and a police officer have died in violence since April 28. At least 431 people have been arrested, according to reports.

As Restrepo sought to dial down tensions, it’s clear the government has paid a steep political cost for insisting that the middle class pay more. President Ivan Duque has made remaking the tax code a top priority since taking office, and about 18 months ago, Colombia was hit with similar street protests when he proposed shifting taxes away from companies and onto individuals. This time around, broadening the tax base was just as unpopular.

The crisis underscores the deep chasm between rich and poor nations when it comes to providing government relief to offset the effects of the pandemic. While the US and EU spent trillions of dollars in stimulus with barely a peep from their debt markets, Colombia’s outlays are being closely monitored by ratings companies and bond vigilantes ready to pounce on any fiscal slippage. One of the few Latin American countries that have consistently paid its debts, it is now struggling to rein in its deficit and stave off credit-rating downgrades that could send borrowing costs soaring.

While Colombia scrambles to curb its budget deficit, countries such as the US and UK are forecast to post a second straight year of shortfalls that equal more than 10% of their annual economic output.

The peso dropped 0.7% on Tuesday to 3,829 per dollar, its weakest since the beginning of November, as investors awaited details about the fiscal plan. The Colcap index of stocks slipped, falling for a fifth straight day. Benchmark overseas bonds due in 2032 traded slightly lower.

Restrepo, 50, a respected economist at home who held the job of trade minister since 2018, took over as finance chief from Alberto Carrasquilla, who stepped down after Duque’s decision to withdraw his tax proposal failed to appease protesters. Many demonstrators have also invoked concerns about changes to a health law being discussed in congress, corruption and police brutality. Unions called on workers to continue to take to the streets.

“He has a conciliatory tone and that’s what is needed now,” said Andres Pardo, a former economic adviser to Duque who is now chief Latin America market strategist at XP Investments. “The market remains focused on the tax reform and waters are still muddied, but I’m optimistic with this new minister.”

Virtually the whole Colombian congress, including Duque’s own Democratic Center party, opposed the government’s initial tax bill because it raised levies on the middle class before a presidential election next year. Carrasquilla said in a statement late on Monday that his continued presence in the government would “make it difficult to build the necessary consensus quickly and efficiently”.

Colombia’s fiscal deficit is set to widen to more than 8.5% of GDP in 2021, from 2.5% in 2019, before the pandemic. Many Latin American nations are also grappling with deficits that ballooned during the pandemic, but unlike Brazil, Mexico, Chile and Peru, Colombia’s deficit will widen rather than narrow this year, according to forecasts from the International Monetary Fund.

In late 2019, Colombia’s Congress approved a bill that cut taxes on companies while raising them on rich individuals. The tax reform was originally intended to trim the fiscal deficit to defend the nation’s credit rating. However, in its final version, many economists estimated that it would weaken public finances rather than strengthen them.

This time around, the amount Restrepo is proposing to raise — equal to about 1.1% of GDP — meets the threshold analysts have said Colombia needs to avoid a downgrade.

UBS Global Wealth Management and JPMorgan Chase have said anything below 1% of GDP isn’t enough. The country has had an investment-grade credit rating since 2011, one of the few in the region with that distinction.

“We expect Congress to eventually approve a watered down tax reform bill” that will boost net revenue by no more than 1% of GDP, Goldman Sachs economist Alberto Ramos wrote in a report, adding that the result will probably be a tax mix that that is less growth and investment friendly than the original proposal.

The fact that Restrepo comes from an academic and technical background rather than the world of politics puts him in a better position to negotiate with different sectors over the new tax proposal, said Andres Saenz, a Bogota-based associate director at Control Risks.The relationship he developed with the powerful private sector while serving as trade minister could be key.

“Having someone like Restrepo will help the government manage expectations with that side of the table,” he said.

Pact’s success will depend on the commitment of governments and big business, watchdogs say
World
4 weeks ago
Next Article