Plan co-ordinated with governors in the US Northeast region, while Florida governor also moves to lift Covid-19 emergency orders 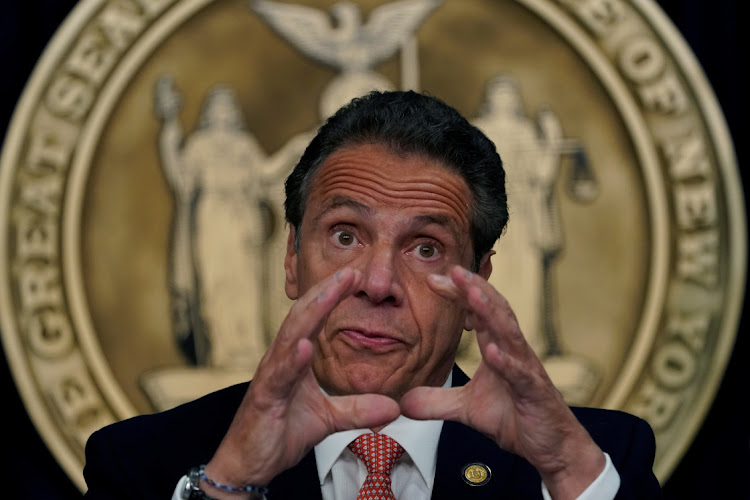 New York governor Andrew Cuomo gestures during a news conference on Covid-19 restrictions, in New York, the US, May 3 2021. Picture: TIMOTHY A CLARY/REUTERS

New York  — New York, New Jersey and Connecticut will lift most of their coronavirus capacity restrictions on businesses, including retail stores, food services and gyms, beginning on May 19, the governors of the three states said on Monday.

New York governor Andrew Cuomo, who announced the plan co-ordinated with the governors of other states in the US Northeast region, said the decision was based on a steady decline in the positive rate of Covid-19 tests and hospitalisations.

The percentage of New Yorkers testing positive for the coronavirus dropped 50% over the past month, and hospitalisations decreased by nearly 40% during the same period, he said.

“New Yorkers have made tremendous progress,” Cuomo said. “It's time to readjust the decision made on the science and on the data.”

Amusement parks, salons and offices are among the other types of businesses which will soon no longer be subject to state-imposed capacity restrictions, though all businesses can still set their own restrictions.

Cuomo also announced that the New York City subway system, which has been closing from 2am to 4am for disinfecting stations and cars, will resume its 24-hour service beginning on May 17.

“We were able announce the elimination of business restrictions due to a nation-leading vaccine distribution programme which benefits all Connecticut residents, and our neighbours in New York and New Jersey,” Connecticut governor Ned Lamont said in a joint statement with Cuomo and New Jersey governor Phil Murphy.

Murphy also said the vaccine rollout was pivotal to his state's ability to ease restrictions, and said the easing would proceed “so long as we don't see a backslide in our metrics”.

Certain protocols such as maintaining 1.80m of space between people will remain in place, Cuomo said, in line with the US Centers for Disease Control and Prevention (CDC) guidance. Exceptions can be made at venues where people will have shown proof of vaccination or a negative Covid-19 test, he said.

The May 19 reopening in New York pre-empts a plan that New York City mayor Bill de Blasio outlined just days ago to reopen his city fully on July 1.

De Blasio said on Thursday that his city could soon return to normal thanks to the progress of the vaccine rollout, noting more than 6-million doses of vaccine have been administered in the city of more than 8-million residents.

New York's move comes just over a year after businesses across the state closed down and limited capacity to combat one of the country's worst Covid-19 outbreaks. It follows updated guidance released by the CDC last week, which said people do not need to wear masks outdoors where social distancing is possible.

On Monday, New York City dwellers were allowed to have a drink sitting at an indoor bar for the first time in months, under loosened state guidelines.

New Jersey's prohibition on indoor bar-side seating is due to be lifted on Friday. Bar owners will then be responsible for using partitions or maintaining social distancing, Murphy said.

Florida governor Ron DeSantis on Monday also announced he was signing an executive order that overruled and suspended all local Covid-19 emergency orders, saying that widespread vaccination made it safe to do so.

Nationwide, more than 147-million people have received at least one vaccine dose by Monday, according to the CDC.

When asked at what point the US might reach herd immunity, President Joe Biden said on Monday, “I think by the end of the summer we'll be in a very different position than we are now...My plea to everyone: get vaccinated now, please.”

Advance purchase contract with Moderna is for up to 500-million doses, but  the bulk will  be available only  in 2022
World
2 days ago

Excelsior Pass is the first government-issued proof of vaccination in the US, but it won’t be the last
Opinion
4 days ago

The immune response after just the first dose was weaker in people who had not previously been infected, leaving them at risk from new variants
World
5 days ago
Next Article