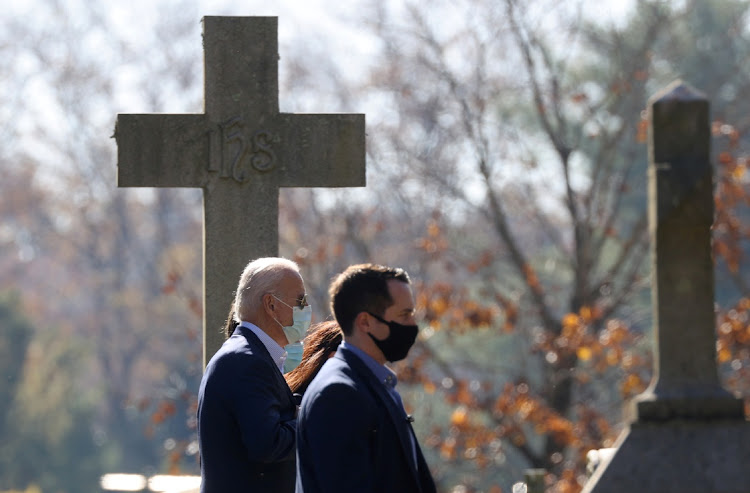 US President-elect Joe Biden arrives with his family for a church service in Wilmington, Delaware, the US, November 8 2020. Picture: REUTERS/JONATHAN ERNST

Washington — President-elect Joe Biden said he would appoint a 12-member coronavirus task force on Monday, his first step towards fulfilling one of his biggest campaign promises — to mount an effective response to the pandemic that has infected millions and damaged the US economy.

“I will spare no effort, none, or any commitment, to turn about this pandemic,” Biden said on Saturday, as he delivered his victory speech in Wilmington, Delaware. The panel will convert his coronavirus-fighting plan into an “action blueprint” that “will be built on a bedrock of science”, he added.

The task force will be led by former surgeon-general Vivek Murthy and former Food and Drug Administration commissioner David Kessler, Biden deputy campaign manager and communications director Kate Bedingfield said on Sunday. Both Murthy and Kessler have been advising Biden on the issue for months.

A person familiar with Biden’s plans said it would also be led by Marcella Nunez-Smith, a professor of public health at Yale University, and include Ezekiel Emanuel, a former Obama administration health adviser.

The co-chairs of the task force are scheduled to brief Biden on Monday after the members are announced.

Biden has promised a much more muscular response to the pandemic than he says President Donald Trump has made. The virus has infected 9.8-million people in the US and killed more than 237,000 people as daily case counts continue to rise.

Biden’s plan calls for increased testing capacity, funding for businesses and schools to reopen safely and eventually a vaccine distributed equitably and for free.

Biden’s victory came after the Associated Press, CNN and NBC showed him winning Pennsylvania and gaining more than the 270 Electoral College votes ...
World
8 months ago