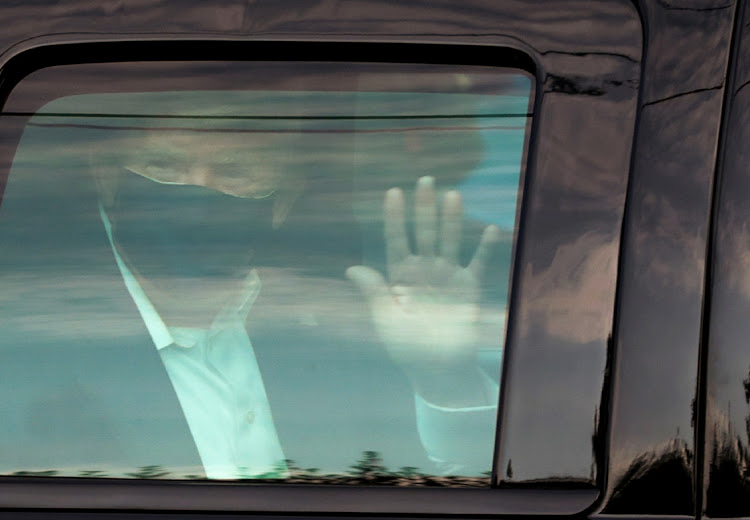 US President Donald Trump waves to supporters as he briefly rides by in the presidential motorcade in front of Walter Reed National Military Medical Center, where he is being treated for Covid-19, on October 4 2020. Picture: REUTERS/CHERISS MAY.

Washington — President Donald Trump unexpectedly left the hospital where he’s being treated for Covid-19 to greet supporters on Sunday, waving to them from his motorcade in a bid to demonstrate strength while yearning to return to the campaign trail.

Video footage showed a mask-wearing Trump waving from behind the closed window of a black sport-utility vehicle while supporters cheered. He then returned to the Walter Reed National Military Medical Center in Maryland, where he has been since Friday, White House spokesperson Judd Deere said.

In a video released on Twitter at about the same time, Trump said he had “learnt a lot” about the coronavirus while undergoing treatment. “This is the real school,” he said. “And I get it. And I understand it.” His outing, he said, was meant to “pay a little surprise” to his supporters.

Trump’s doctors gave an upbeat assessment of his health as he recuperates from the virus infection, and one of them said he could be released from the hospital as early as Monday. Yet new disclosures about his treatment raise concern that his condition is more serious than what the US public has been told.

“The president has continued to improve,” the White House physician, Sean Conley, told reporters in a briefing by the medical team on Sunday morning. “As with any illness, there are frequent ups and downs over the course.”

Brian Garibaldi, a member of the president’s medical team and a pulmonary expert at Johns Hopkins University, said “our hope is that we can plan for a discharge as early as tomorrow to the White House.”

Conley revealed that Trump, who disclosed on Friday that he had tested positive for Covid-19, has been administered a medication to control inflammation, and he acknowledged for the first time that the president was given supplemental oxygen on Friday at the White House.

Also, Trump didn’t disclose a positive result from a rapid test for Covid-19 on Thursday before a telephone interview on Fox News while awaiting the findings from a more thorough coronavirus screening, the Wall Street Journal reported on Sunday, citing people familiar with the matter it didn’t identify.

On Sunday evening, White House press secretary Kayleigh McEnany told reporters that Trump first tested positive after he returned from a fundraiser at his New Jersey golf resort on Thursday. “I’m not giving a detailed readout of his testing. But safe to say, his first positive test was upon return or at least after Bedminster,” she said.

Although aides suggested that Trump would soon be ready to return to the campaign trail with the election just a month away, questions persist about how sick he has been as he heads into an phase where some patients’ conditions worsen suddenly and dramatically.

“We know that in many patients who do get very sick, it happens around day 8-10,” said Helen Boucher, chief of the division of geographic medicine and infectious diseases at Tufts Medical Center in Boston.

McEnany, too, expressed some caution.

“He will come out on the other side of this,” she said on Fox News. “But, of course, we’re cognisant that the next day or two is important.”

And Dr James Phillips, a professor of emergency medicine at George Washington University, said Trump put others at risk by taking the ride on Sunday. “That presidential SUV is not only bulletproof, but hermetically sealed against chemical attack. The risk of Covid-19 transmission inside is as high as it gets outside of medical procedures. The irresponsibility is astounding,” Phillips tweeted.

Deere said later that “appropriate precautions were taken in the execution of this movement to protect the president and all those supporting it, including PPE. The movement was cleared by the medical team as safe to do.”

A spokesperson for the US Secret Service said protocols had been followed for the safety of the service’s personnel who protect the president.

At Sunday’s briefing, Conley said that Trump’s blood-oxygen saturation level dropped twice since his diagnosis, and that the president’s medical team decided after some debate to administer dexamethasone, a steroid used to treat inflammation in Covid -19 patients. Asked about X-rays and CT scans of the president’s lungs, Conley said there were “some expected findings” but nothing “of any major clinical concern”.

Trump has already been administered an experimental “antibody cocktail” as well as remdesivir, an antiviral drug.

During a briefing on Saturday, Conley said flatly that Trump hadn’t been administered oxygen on Friday, then hedged to say he hadn’t received it at Walter Reed.

Trump was “adamant that he didn’t need it”, Conley said on Sunday, and his blood-oxygen saturation was restored to about 95% after about a minute of supplemental oxygen at the White House. The president remained on oxygen for less than an hour, Conley said, and he hasn’t needed the treatment or seen a recurrence of fever since Friday.

Asked why he didn’t disclose the information earlier, Conley said, “I was trying to reflect the upbeat attitude that the team, the president, that his course of illness had had. I didn’t want to give any information that might steer the course of illness in another direction, and in doing so, it came off that we were trying to hide something that wasn’t necessarily true.”

He concluded Sunday’s briefing after only about 10 minutes, refusing to answer repeated questions about whether scans of Trump’s lungs had shown any sign of pneumonia.

“We need to have trust that what they’re telling us about the president’s condition is real,” House speaker Nancy Pelosi said on CBS’s “Face the Nation”. Suggesting that Trump is approving the medical team’s public statements, the Democratic leader said, “That’s not very scientific.”

Earlier on Sunday, a senior campaign aide said Trump would soon be “ready to get back to the campaign trail”.

Jason Miller said on NBC’s “Meet the Press” that in a phone conversation on Saturday afternoon Trump, who has for months defied public health recommendations to wear a mask and maintain social distance, wants “to remind folks to wash their hands, use hand sanitiser, make sure that if you can’t socially distance to wear a mask”.

Asked about a new NBC-Wall Street Journal poll that shows Biden leading Trump by 14 percentage points, Miller said on ABC’s “This Week” that the campaign is upbeat about Trump’s prospects in key battleground states needed to get to 270 electoral votes. In the poll taken after Tuesday’s president debate but before Trump was diagnosed with Covid-19, Biden led Trump 53% to 39%, the biggest lead of the presidential campaign.

Trump took to Twitter on Sunday afternoon to thank “all of the fans and supporters” who have been gathering outside Walter Reed’s gates.

The president’s aides took to the Sunday news shows seeking to dispel doubts about his re-election campaign and defend his campaign rallies and White House events where Trump and his supporters seldom wore masks.

“We give them a mask, we check their temperature,” Miller said, scoffing that Democratic candidate Joe Biden often “used the mask as a prop”. Trump also has ridiculed Biden for wearing a mask in his public appearances.

Miller said Trump is “going to defeat” the virus. “And I think when President Trump gets to the White House and out on the campaign trail that it’s going to be a slingshot going forward,” he said.

But National Security Advisor Robert O’Brien, who came down with the virus earlier and has recovered, was more cautious, underscoring that it’s too soon to know how Trump will fare.

Asked about a potential transfer of power should Trump’s situation deteriorate, O’Brien said, “We’ve got a great team in place and the president is firmly in control.”

Miller, the campaign adviser, promoted what’s being billed as “Operation Maga,” with a virtual event on Monday night followed by vice-president Mike Pence, Trump family members and surrogates fanning out after the vice-presidential debate scheduled for Wednesday night in the effort to generate momentum in Trump’s absence.