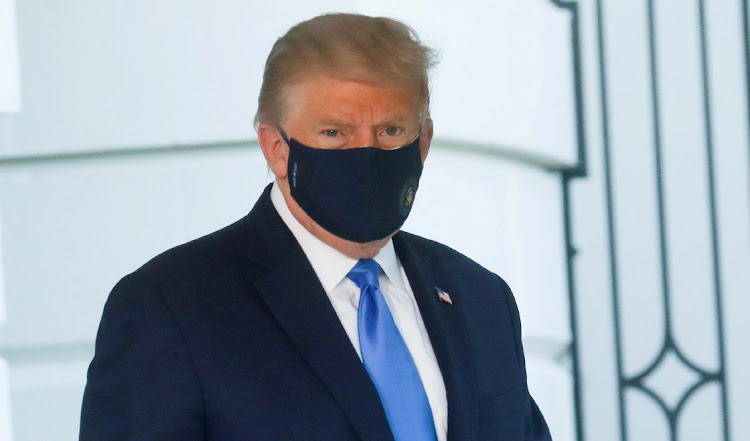 US President Trump walks to the Marine One helicopter as he departs from the White House to fly to Walter Reed National Military Medical Center, in Washington, the US, October 2 2020. Picture: REUTERS/LEAH MILLIS

Washington — President Donald Trump has sought to dispel questions about the severity of his coronavirus infection by calling for a new round of stimulus, posting the second video of himself in two days and launching a fresh round of campaigning by top supporters.

In the video, posted on Twitter after nearly 24 hours in the hospital, Trump said “I feel much better now” and “I think I’ll be back soon” to the re-election campaign. His doctor, Sean Conley, said in a Saturday night update that the president had made “substantial progress” and “spent most of the afternoon conducting business”.

Trump lashed out in private at his chief of staff, Mark Meadows, after learning that it was Meadows who told reporters earlier in the day that the president’s vital signs looked troubling, and that the next 48 hours would be crucial as the president was not yet on a clear path to recovery.

That contradicted a public readout of Trump’s condition from Conley, signalling that in the White House questions still linger on the president’s health as he entered a second full day at Walter Reed National Military Medical Center.

Trump’s re-election campaign is now mobilising allies to counteract that image through appearances on television and other media, according to people familiar with the plans who also described Trump’s displeasure with Meadows. The effort by allies to show Trump making a strong recovery was under way on Saturday, with the addition of Trump campaign adviser Jason Miller to the guest line-up of NBC’s Meet the Press.

The president’s campaign launched Operation MAGA to send out surrogates who would attest to his vitality and keep his voter base motivated until Trump recovers enough to resume campaigning in person.

Even so, the virus spread further in the president’s circle as Chris Christie, the former New Jersey governor and Trump debate coach, said he checked into a hospital on Saturday with “mild symptoms” of Covid-19.

In an update issued by the White House on Saturday night, Conley said that while the president was “not yet out of the woods, the team remains cautiously optimistic”. Conley said that Trump had received without complications a second dose of Gilead Sciences’s Remdesivir, which is authorised for use on Covid-19 hospital patients.

The doctor told reporters earlier in the day that Trump had a “mild cough and some nasal congestion and fatigue” on Thursday, but all of those symptoms were “resolving and improving”.

The remarks contradicting Conley’s upbeat account of Trump’s health were initially attributed to an informed source and included in a pool report shared with the White House press corps. A video later surfaced on the internet showing Meadows talking to the reporters.

Though Conley said Trump has been fever free for more than 24 hours, he declined to answer several questions directly about the president’s health, including what his temperature was on Thursday or whether he was ever on supplemental oxygen to help him breathe.

Meadows said in a Fox News interview on Saturday night that Trump was “doing really well now” but on Friday had a fever and reduced blood-oxygen saturation.

“Yesterday morning we were concerned with that,” he said. “He had a fever, and his blood oxygen level had dropped rapidly.”

Conley also created some confusion by putting the timeline of the president’s diagnosis at 72 hours, longer than previously announced. Later on Saturday, he corrected his remarks, reiterating that Trump was first diagnosed with Covid on Thursday night.

Trump praised the doctors and nurses at Walter Reed on Saturday, tweeting: “With their help, I am feeling well!” In another tweet, he called for legislators to agree on another round of pandemic relief to spur the US economy.

Conley said Trump had not had trouble breathing. Trump’s blood-oxygen saturation level was 96% to 98% and he was not at present on supplemental oxygen, Conley said. Trump did not need oxygen on Thursday or Friday after he was taken to hospital, but the doctor did not say if the president was given oxygen on Friday while still at the White House.

The doctor declined to say when the president last received a negative coronavirus test and how Trump was infected, calling the question “irrelevant” to his care. Asked about Trump’s risk factors for Covid-19, Conley said: “He’s 74, he’s male and he’s slightly overweight. Other than that, he’s very healthy.”

Trump is only the most prominent case in the coronavirus outbreak among top Republican leaders. Trump’s campaign manager, Bill Stepien, and Republican national committee chair Ronna McDaniel both tested positive.

Christie said on Saturday that he tested positive. “In consultation with my doctors, I checked myself into Morristown Medical Center this afternoon,” he said on Twitter. “While I am feeling good and only have mild symptoms, due to my history of asthma we decided this is an important precautionary measure.”

Trump travelled to New Jersey on Thursday for a fundraiser after learning that a close aide, Hope Hicks, had tested positive for coronavirus infection. CDC guidelines call for people who are in close contact with infected people to quarantine themselves for 14 days and practice social-distancing at all times.

Conley said that he had made the call for Trump to go to Walter Reed, despite evidently mild symptoms “because he’s the president of the US”.

Some of the infected Republicans, including Lee, Tillis and Conway, attended a September 26 event at the White House where Trump announced he would nominate judge Amy Coney Barrett to replace the late supreme court judge Ruth Bader Ginsburg. Though the event was held outdoors at the White House Rose Garden, there were few public-health precautions.

More than 150 people sat side by side in the audience. Almost no-one wore masks. Lee was seen hugging other guests. Many of the guests participated in crowded indoor receptions.

Trump entered hospital on Friday night after announcing earlier in the day that he and first lady Melania Trump had been diagnosed with the disease caused by the novel coronavirus.

Doctors have administered a pair of advanced treatments to the president: Remdesivir and an experimental “antibody cocktail” made by Regeneron Pharmaceuticals that does not yet have FDA approval.

Trump posted his first video to Twitter since the diagnosis as he arrived at Walter Reed on Friday evening. “I’m doing very well, but we’re going to make sure that things work out,” he said.

In future, the moderator should have the ability to mute microphones if rules are broken
Opinion
11 months ago
Next Article