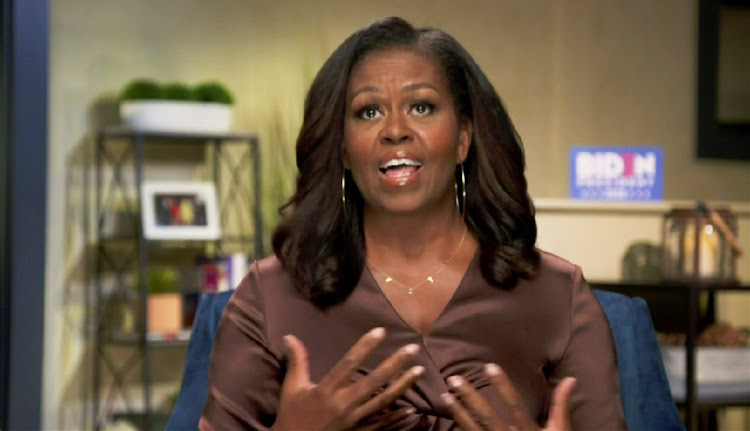 Calling Joe Biden “a profoundly decent man”, Obama said she saw first-hand during the presidency of her husband how the job requires judgment, an appreciation of history and a moral compass.

Trump “is the wrong president for our country”, she said. “He has had more than enough time to prove that he can do the job, but he is clearly in over his head. He cannot meet this moment. He simply cannot be who we need him to be for us.”

“It is what it is,” she added pointedly, a phrase Trump used to describe the state of the coronavirus pandemic that has crippled the US.

Adding to the unusual, virtual character of the convention, Obama’s speech was recorded before Kamala Harris was selected as Biden’s running mate last Tuesday, according to a person familiar with the timing.

It was a familiar convention role for the former first lady, who delivered uniquely personal speeches to three previous conventions, mixing meditations on character with the problems of everyday Americans.

Her speech echoed her convention addresses supporting her husband in 2008 and 2012 and Hillary Clinton in 2016, but with the more intimate setting of a straight-to-camera web video without an audience.

“Being president doesn’t change who you are,” she told Democrats in 2012, speaking of Barack Obama. “No, it reveals who you are.”

On Monday, she returned to that theme. “A presidential election can reveal who we are too,” she said, “and four years ago too many people chose to believe that their votes didn’t matter.”

She described Trump’s America as a place where people fight over wearing masks at grocery stores, federal officials put immigrant children in cages and where “stating the simple fact that a black life matters is still met with derision from the nation’s highest office”.

“Sadly this is the America that is on display for the next generation, a nation that’s underperforming not simply on matters of policy, but on matters of character,” she said. “And that’s not just disappointing, it’s downright infuriating.”

Obama  recalled and updated her signature line from the 2016 campaign.

“Over the past four years, a lot of people have asked me, ‘when others are going so low, does going high still work?’ My answer is that going high is the only thing that works,” she said.

But she added: “Going high does not mean putting on a smile and saying nice things when confronted by viciousness and cruelty.”

Obama’s speech culminated a night of testimonials about Biden’s character from across the political spectrum, from Republicans to democratic socialist Bernie Sanders. But her speech was uniquely personal, directly addressing people reluctant to tune into political speeches.

“I know Joe,” the former first lady said in the 19-minute video. “He is a profoundly decent man guided by faith. He was a terrific vice-president. He knows what it takes to rescue an economy, beat back a pandemic and lead our country.

“He will govern as someone who has lived a life that the rest of us can recognise.”

The fragile coastal plain, home to polar bears and caribou herds, has remained off limits to oil drilling for decades
World
10 months ago

A year ago, Cyrus Vance issued a grand jury subpoena to Trump’s accounting firm, Mazars USA, demanding eight years of his business and personal ...
World
10 months ago
Next Article