Death toll from tropical storm Ana rises to 70 in Madagascar, Mozambique and Malawi 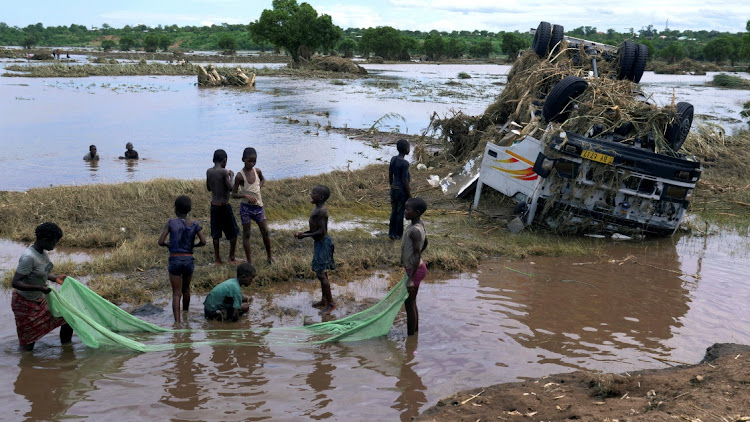 Children use a mosquito net to catch fish near a wreck, washed away during tropical storm Ana on the flooded Shire River, in southern Malawi, January 26 2022. Picture: ELDSON CHAGARA

The death toll from tropical storm Ana rose to 70 on Thursday as tens of thousands of victims struggled for safety and shelter in the flooding.

Ana made landfall in Madagascar on Monday before cutting through Mozambique and Malawi.

Madagascar has reported 41 dead, with 18 others killed in Mozambique and 11 in Malawi, reports said.

Rescue workers and authorities were still assessing the extent of the damage.

More than 20,000 people in Mozambique have been affected by the storm, with more than 3,000 homes partially destroyed and over 600 completely destroyed along with several health centres and dozens of classrooms, Mozambique’s National Institute for Management and Disaster Risk Reduction said, adding that drones and boats had been deployed in relief efforts.

In neighbouring Malawi, the storm led to major power cuts as flooding damaged electricity installations, bridges were washed away. Rural families have lost their livestock and crops.

Mozambique and other Southern African countries have been repeatedly struck by severe storms and cyclones in recent years that have destroyed infrastructure and displaced large numbers of people.

Experts say the storms have become stronger as waters have warmed due to climate change, while rising sea levels have made low-lying coastal areas vulnerable.

Naemi Heita, acting head of the cluster delegation in Mozambique's capital Maputo for the International Federation of Red Cross and Red Crescent Societies, told Reuters that clean drinking water, mosquito nets and masks were some of the immediate items needed to prevent disease outbreaks.

“Beyond the emergency response we need to make sure that we support those families to rebuild their livelihoods — their fields are submerged and their houses are destroyed, ... we need to support them to build back safer,” she added. With Staff Writer

Heatwaves, droughts and floods could wipe out many endemic species
World
1 year ago

Governments need to do more to deal with the crisis as the continent is the most exposed region to the adverse effects of global warming, writes ...
National
2 years ago
Next Article