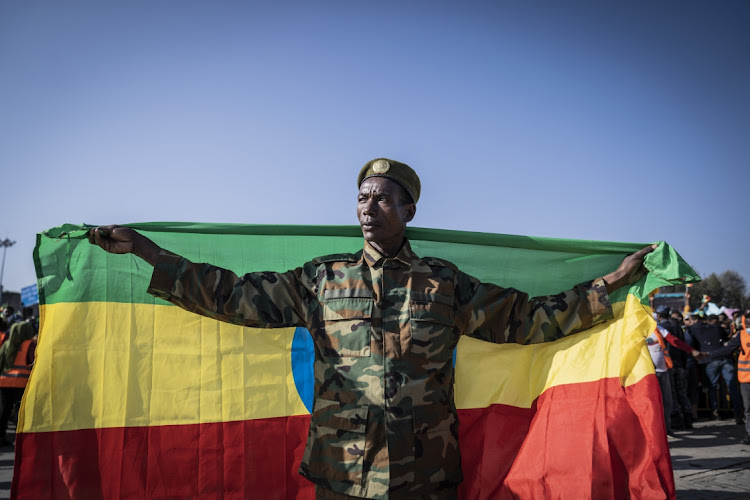 A war veteran carries the Ethiopian national flag in support of Ethiopian military troops who battling against the Tigray People's Liberation Front in the Amhara Region. Picture: Getty Images

Geneva — All sides in the deepening conflict in northern Ethiopia are committing severe human rights violations and should pull back from their year-old war, the United Nations (UN) said on Friday.

An estimated 5,000 to 7,000 people are detained, including nine UN staff, under a state of emergency and its "excessively broad provision" declared by the government last month, the UN deputy high commissioner for human rights, Nada al-Nashif, said.

"Many are detained incommunicado or in unknown locations. This is tantamount to enforced disappearance, and a matter of very grave concern," she told a special session of the U.N. Human Rights Council.

Ethiopia's ambassador to the UN in Geneva, Zenebe Kebede, did not comment directly on the accusations of detentions, but said that there was a failure to condemn what he said was a series of abuses by rebellious forces from the northern Tigray region.

"Ethiopia is being targeted and singled out at the Human Rights Council for defending a democratically elected government, the peace and the future of its people," he said.

Thousands of civilians have died and millions have fled in the conflict between the federal government and rebellious forces including fighters loyal to the Tigray People's Liberation Front (TPLF), which dominated Ethiopia's ruling coalition for nearly 30 years.

Al-Nashif said people had been detained in Oromiya and Benishangul-Gumuz regions this month.

"I also deplore increasing hate speech and incitement to violence by federal and regional authorities, as well as other public figures, particularly targeted against Tigrayans and members of the Oromo community," she added.

The forum will consider a draft resolution brought by the European Union that condemns violations by all sides. If adopted, it would set up an international commission of rights experts on Ethiopia to investigate and report back after a year.

The US called for the resolution's adoption and for the Ethiopian government to "release all civilians and allow international monitors timely access to detainees".

Ethiopia's Zenebe rejected the resolution and said the government would not work with any such commission.

He added that the state-appointed Ethiopian Human Rights Commission had already worked with the UN rights office to investigate accusations of abuses, and was ready to do so again.

That joint investigation published last month found that all sides in Tigray's conflict had committed violations that may amount to war crimes.

Diplomats expected the vote on the resolution to be close at the 47-member-state forum.

The African Group of countries said that "any politicisation of the investigation process must be avoided" and that the EU had "totally ignored its positions and advice on this delicate situation".

The proposed investigative mechanism was "counterproductive and likely to exacerbate tensions," it said, calling for the resolution to be rejected.

In Addis Ababa, Ethiopian government spokesman Legesse Tulu did not respond to requests for comment.

Armed forces from Amhara region said to have stepped up killings, mass detentions and expulsions
World
5 months ago

Ethiopia’s latest descent into civil war raises further questions about its readiness to play a leading role in the development of a pan-African ...
Opinion
6 months ago

One year on, the conflict in Tigray shows no sign of abating. While the government dismisses talk of a crisis as a Western plot, Ethiopia watchers ...
Features
6 months ago
Next Article