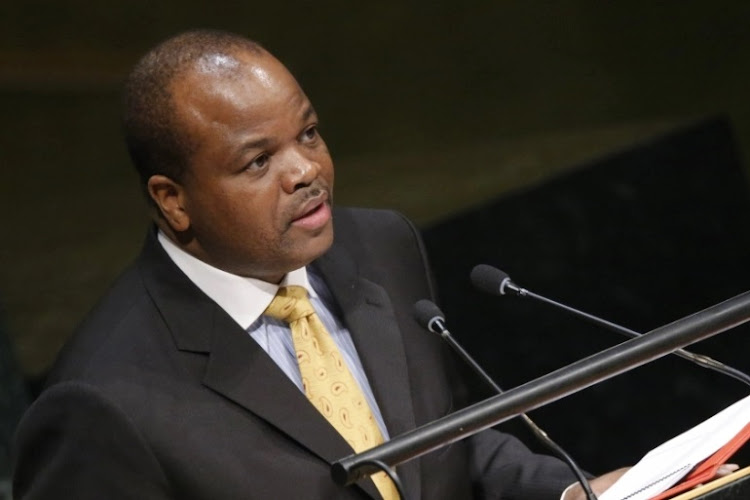 Mbabane — The kingdom of eSwatini came to an almost standstill on Tuesday as protesters demanded political reforms amid claims that the absolute monarch, King Mswati III had fled the country to neighbouring SA.

Acting Prime Minister Themba Masuku denied media reports that the king had fled the violence. The department of international relations & co-operation refused to comment, with spokesperson Clayson Monyela only saying: “The situation [there] is being monitored.”

A  statement from Masuku said: “His majesty, King Mswati III, is in the country and continues to lead in working with government to advance the kingdom’s goals. We appeal for calm, restraint and peace from all emaSwati (eSwatini citizens).”

The 53-year-old king denies being an autocrat, and is impenitent about the lifestyle enjoyed by him and his fifteen wives, who between them occupy several state-funded palaces.

Anger against Mswati has been building for years, and protests occasionally turn violent, with police using teargas, stun grenades and water cannon to disperse stone-throwing protesters.

Security forces set up roadblocks to control access to the capital, Mbabane. Some banks said they had shut until the unrest, which started on the weekend and turned violent overnight, subsides.

Campaigners say the king has consistently evaded calls for meaningful reforms that would nudge eSwatini, which changed its name from Swaziland in 2018, in the direction of democracy. They also accuse him of using public coffers as a piggy bank, funding his lavish lifestyle off the backs of his 1.5-million subjects, most of them subsistence farmers.

A spate of crackdowns, such as the arrest of opposition leaders and activists in 2019, has done little to discourage antimonarchy sentiment in the former British protectorate.

“I can hear gunshots and smell teargas. I do not know how I will get home, there is nothing in the bus rank, there is a strong presence of riot police and the army,” Vusi Madalane, a shop assistant in the capital Mbabane, said by telephone.

Communist Party of Swaziland general secretary Thokozane Kenneth Kunene told Business Day on Tuesday that the major towns had been closed due to the protests. “There are no services to the people, shops and filling stations have been closed, there is no economic activity in eSwatini right now.”

Kunene said the citizens were suffering and “extremely isolated from economic activities”.

“The army must go back to the barracks and allow democracy to unfold,” said Kunene.

“They are monitoring the situation and would take appropriate action when required, which may include a temporary suspension of services. South Africans who wish to return or want to bring back their property such as trucks will be assisted at the border,” said Qoza.

Meanwhile, Eswatini Airlink and operating partner Airlink, the SA-based domestic and regional airline, have cancelled flights from Wednesday between Johannesburg and Sikhuphe’s King Mswati III International Airport, due to the unrest.

“We will continue to assess the situation and we will restore normal services as soon as it is safe to do so,” said Eswatini Airlink GM Joseph Dlamini.  With Reuters

Ambrose Dlamini  says he is asymptomatic, feeling well and will work from home
World
1 year ago

Kenya, Ghana, eSwatini, Madagascar and Egypt are all in the race, while Ethiopia and Senegal have pulled out
World
3 years ago
Next Article