Kenyan doctors strike in protest over benefits and PPE shortages 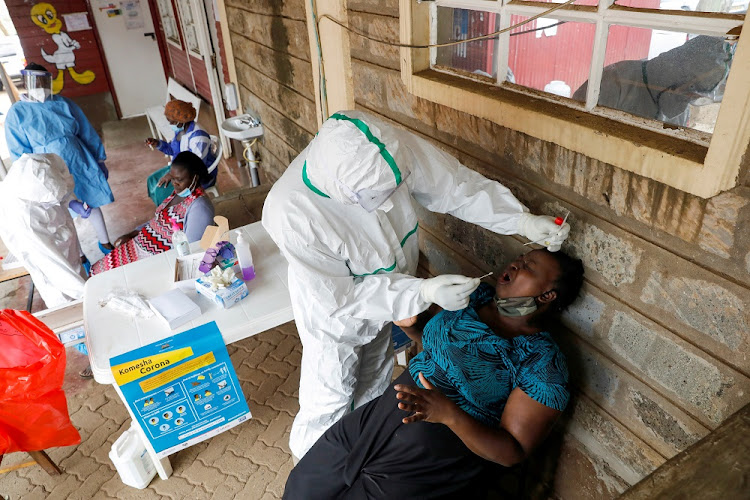 Health workers collect samples during mass testing for the coronavirus in the Kibera slums of Nairobi, Kenya. Picture: REUTERS/BAZ RATNER

Nairobi — Doctors employed in Kenya’s public hospitals went on strike on Monday, saying the government is risking their lives by forcing them to treat Covid-19 patients without adequate personal protective equipment (PPE) and not insuring them for treatment if they fall ill.

The Kenya Medical Practitioners, Pharmacists and Dentists Union, with 7,000 members nationwide, announced their decision late on Sunday on Twitter. It said the government had not responded to grievances the union has been raising since March when the country reported its first coronavirus case.

“It’s about the safety and welfare of the doctors,” Chibanzi Mwachonda, secretary-general of the union, said on Monday. The country’s fight against the coronavirus would be badly hampered by the doctors’ walkout, but he said the medics had no other choice.

The doctors’ union joined nurses and clinical officers working in government hospitals, used by most people in the country, who have been on strike for two weeks.

Over the weekend, Kenya’s health minister Mutahi Kagwe said that medics on strike should return to work to avoid being fired.

At least 14 doctors have died of Covid-19 since March, several of them leading specialist physicians, according to the doctors’ union.

Kenya reported 349 new cases of Covid-19 on Sunday, with six fatalities, bringing the number of confirmed cases to 94,500 and the number of deaths to 1,639, the health ministry said.

In the past month, the virus has been spreading to rural areas where the public health system is creaking and limited intensive-care units are full, medics said.

The investigation began in 2019 after a group of health workers accused medical administrators  schemes of investigating only black and Indian ...
National
10 months ago

Macron’s infection is fuel to the fire for vaccine naysayers

Despite being the country of Pasteur, slayer of smallpox, only 54% of French adults say they are willing to get a Covid-19 shot
Opinion
10 months ago
Next Article