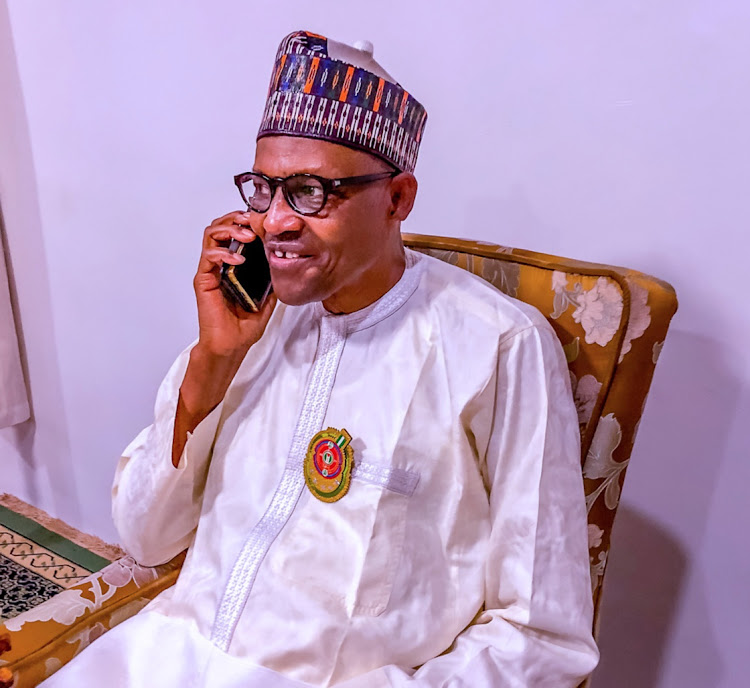 Nigerian President Muhammadu Buhari receives a phone call from Katsina state Governor Aminu Bello Masari who is briefing him on the rescue mission of the abducted students of the Government Science Secondary School, in Daura, Nigeria in this handout picture obtained by Reuters on December 17, 2020. Picture: SUPPLIED

Katsina — Nearly 350 kidnapped Nigerian schoolboys are expected to be reunited with their families on Friday after security forces rescued them from a vast forest in the north of the country.

Last Friday night, gunmen raided the Government Science Secondary School in Kankara town, Katsina state, on motorbikes and marched the boys into the sprawling Rugu forest, one of the country’s largest woodland areas.

It was one of the biggest mass abductions in recent years.

Katsina governor Aminu Bello Masari said late on Thursday that 344 boys had been freed from the forest in neighbouring Zamfara state. There was still some uncertainty as to whether all of those abducted had been rescued.

Photographs released by Katsina state government showed smiling boys looking out from the back of trucks.

“I couldn’t believe what I heard until neighbours came to inform me that it’s true,” Hafsat Funtua, mother of 16-year-old Hamza Naziru, said in a phone interview.

Describing the moment she heard the news, she said she ran out of her house with joy “not knowing where to go” before returning home to pray.

Another parent, Husseini Ahmed, whose 14-year-old Mohammed Husseini was also among those abducted, expressed happiness and relief that he would soon be reunited with his son.

“We are happy and anxiously expecting their return,” he said.

A Katsina state government spokesperson on Friday said the boys would undergo a medical examination before being reunited with their parents. He also said they would meet President Muhammadu Buhari on Friday.

Hours before the rescue of the boys was announced, a video started circulating online purportedly showing Islamist militants from Boko Haram with some of the boys. Reuters was unable to immediately verify the authenticity of the footage, the boys, or who released it.

In an interview with state TV channel NTA, in which he announced the release of the captives, Masari said “most” of the boys had been rescued.

But an aide told Reuters early on Friday said they were all free. “No student is still with the abductors,” Katsina state government spokesperson Abdu Labaran said via telephone.

The president posted a tweet on Friday of a video in which he said he had spoken to the governor and the military to congratulate them.

“The military is well trained. I am very impressed with the governor,” said Buhari.

Katsina state’s governor said security forces had cordoned off the area around the boys, and that not a single shot was fired.

Labaran said questions about the captors and whether they had been arrested should be directed to the military.

Nigerian military in firefight with gang who kidnapped students

Investors use gold ETF to get cash out of Nigeria

Investors use gold ETF to get cash out of Nigeria