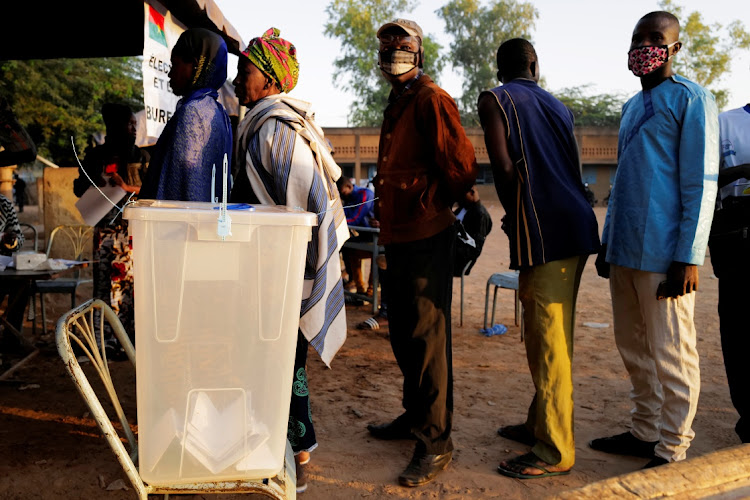 People queue at a polling station during the presidential and legislative election in Ouagadougou, Burkina Faso, November 22 2020. Picture: REUTERS/ZOHRA BENSEMRA

Voting began in Burkina Faso on Sunday, where President Roch Marc Christian Kabore has spent most of his five years in office fighting an Islamist insurgency that has forced a million people to flee their homes. He’s likely to win a second term as the insecurity disrupts voting in opposition strongholds.

Large swathes of the West African gold producer have become ungovernable since Islamist militants based in Mali expanded their reach across the border four years ago. In 2020, Burkina Faso recorded an unprecedented surge in attacks, both by militants affiliated with Al-Qaeda and Islamic state and rural militias. Rights groups say that abuse of civilians by security forces is also on the rise.

At least 2,500 people have been killed in 2020, according to the Armed Conflict Location & Event Data Project. The UN estimates that 3-million people out of a population of 21-million need food aid.

Yet the government was determined to press ahead with the vote. In August, parliament approved a change to the electoral code that invokes “extraordinary circumstances”, allowing for presidential and legislative elections even if many polling stations cannot  open. More than 400,000 displaced people were not able to get a voter card or register to vote. The electoral commission has said that security concerns barred it from registering voters in 17% of all districts and villages nationwide.

“By allowing the elections to go ahead, authorities in fact acknowledge that part of the country is out of control,” said Mahamadou Sawadogo, a security consultant who researches the Islamist insurgency.

The attacks have also affected campaigning. Last week, Kabore, 63, temporarily halted his campaign when 14 government soldiers were killed in an ambush. A raid targeting a legislator rallying support in northern Burkina Faso killed the driver of his car.

Kabore is among 13 candidates vying for the presidency. His main challengers are Zephirin Diabre, a former finance minister, and Eddie Komboigo, a candidate for the former ruling party.

The change to the electoral code will probably benefit Kabore’s party, which enjoys strong support from voters in areas that aren’t affected by the violence, including the capital, Ouagadougou, the International Crisis Group said in a briefing Friday.

“A new president must ensure peace and stability,” said Zaida Modeste, voting in Ouagadougou on Sunday.

In the northern town of Djibo, near the border with Mali, voters cast their ballots under heavy military presence.

Still, for some Burkinabe, casting a ballot is the least of their concerns.

Boucari Dicko left the violence-hit Soum province for the capital after militants went on a rampage in nearby villages. A health worker, Dicko said he did not manage to register in time.

“As long as there’s no peace, no stability, people will have other priorities,” Dicko said by phone.

Kabore took office in 2015 after an interim government organised elections in the wake of a popular uprising that forced regional kingpin Blaise Compaore from power. Under Compaore, who ruled for almost three decades, Burkina Faso became one of the most stable countries in West Africa. His overthrow plunged the military and the intelligence service into disarray and paved the way for Islamist militants to gain a foothold in the northeast.

Less than two months after Kabore’s 2015 election victory, a high-profile attack on an upscale hotel in the Ouagadougou prompted the US to increase military aid to Burkina Faso, which reached about $100m in 2018 and 2019.

But unlike Mali, where the UN has 13,000 peacekeepers, the army has had to face the jihadist insurgency largely on its own. While the US built a $110m drone base in Niger, it has less than 100 troops in Burkina Faso. French special forces operate mostly from Mali and Niger.

Kabore has pledged to strengthen the army if he wins another mandate, but has also said that regional co-operation is crucial to quash the insurgency.

“We need to work together with neighbouring countries to stop these groups,” he told state broadcaster RTB last week. “They’re very mobile, they move on motorbikes to attack our territory and disappear back into their hideouts. The fight against terrorists is a transnational fight.”

After leading a coup in 1991, he held democratic elections in 1992 and handed power to a civilian president, earning him the nickname ‘soldier of ...
World
10 months ago

Blasphemy convictions divide Nigeria as child is given 10 years

A death sentence for a man, 10 years for a 13-year old, sharia law and a secular legal system make uncomfortable bed-fellows in Nigeria
World
11 months ago
Next Article