US basketball star Griner’s Russian trial should be over ‘very soon’, lawyer says 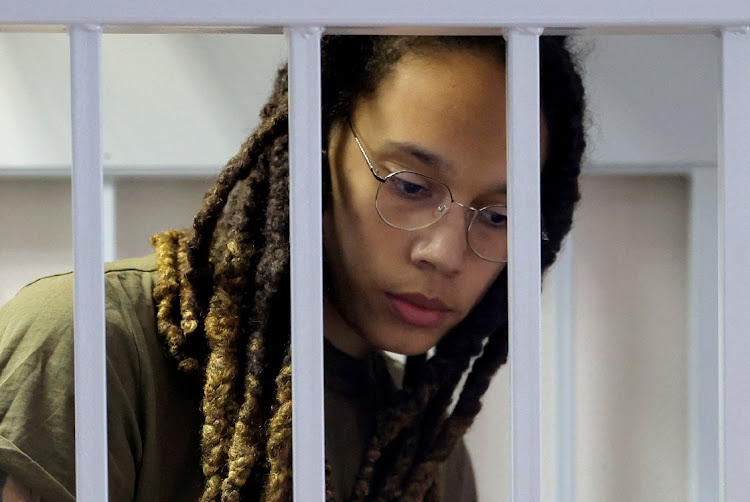 US basketball player Brittney Griner, who was detained at Moscow's Sheremetyevo airport and later charged with illegal possession of cannabis, looks on inside a defendants' cage before a court hearing in Khimki outside Moscow on August 2 2022. Picture: REUTERS/EVGENIA NOVOZHENINA

The Russian drugs trial of US basketball star Brittney Griner should be over “very soon”, her lawyer said on Tuesday, as the Kremlin warned the US that megaphone diplomacy would not secure a prisoner swap for the 31-year-old Texan.

Griner, a two-time Olympic gold medallist and a Women’s National Basketball Association star, was detained at Moscow’s Sheremetyevo airport on February 17 with vape cartridges containing hashish oil in her luggage.

She has pleaded guilty to the drugs charges against her but has denied that she intended to break Russian law. She faces up to 10 years in prison.

Lawyer Maria Blagovolina, a partner at Rybalkin, Gortsunyan, Dyakin and Partners law firm, said a verdict in the case was expected “very soon”. The defence and prosecution are expected to deliver their closing arguments on Thursday.

The case against Griner has highlighted Russia’s fraught relations with the US, which have plunged to a new post-Cold War low over Moscow’s actions in Ukraine.

Blagovolina said Griner heard that Washington had made what secretary of state Antony Blinken called a “substantial offer” to Moscow to release American citizens held in Russia.

Kremlin spokesperson Dmitry Peskov, who had expressed surprise at the public nature of Blinken’s comments at the time, said on Tuesday that any talk of a possible swap needed to be discreet.

“We still believe that any exchanges of information on this topic should be discreet,” Peskov told reporters on a conference call. “Megaphone diplomacy and the public exchange of opinions will not lead to results.”

Griner, who appeared in Khimki district court outside Moscow in a plain khaki T-shirt and round-rimmed glasses, was both focused and nervous as her trial approaches its end, her lawyer said.

“She still knows that the end [of her trial] is near and of course she heard the news, so she is hoping that sometime she could be coming home,” Blagovolina said.

A source said Washington was willing to exchange convicted arms trafficker Viktor Bout, known as the “Merchant of Death”.

Blagovolina said a swap was “legally possible” after the verdict, which is expected no later than mid-August.

Griner testified last week that she could not understand how the vape cartridges had ended up in her luggage, speculating that she had inadvertently packed them as she rushed to leave.

Griner had been on her way to join her Russian team, UMMC Ekaterinburg, for the playoffs after spending time at home in the US.