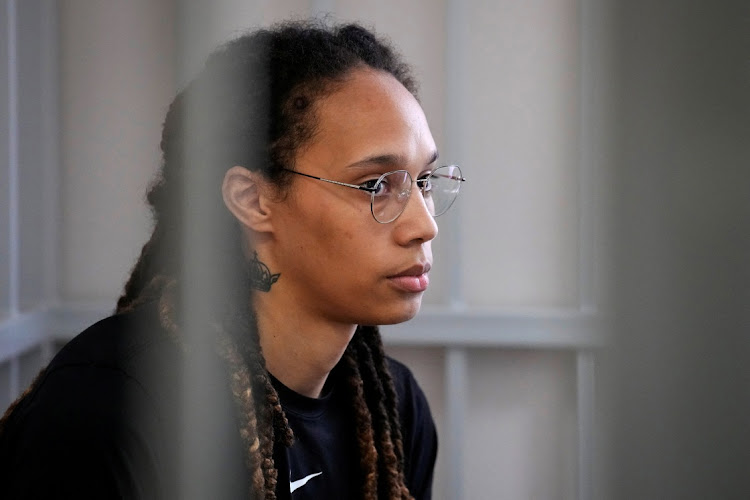 WNBA star and two-time Olympic gold medalist Brittney Griner sits in a cage at a court room prior to a hearing, in Khimki, outside Moscow, Russia, on July 27 2022. Picture: REUTERS/ALEXANDER ZEMLIANICHENKO

London — Russia on Thursday said there was no deal yet with the US on swapping detained US basketball star Brittney Griner and a former marine for Viktor Bout, a jailed Russian cast by prosecutors as one of the world’s most prolific arms dealers.

Secretary of state Antony Blinken said the US had made a “substantial offer” to Russia to release US citizens held in Russia, and a source said that Washington was willing to exchange Bout, known as the “Merchant of Death”.

Bout supplied arms and ammunition to African dictators and warlords, often in violation of UN arms embargoes. He lived in SA and Swaziland, from where he ran his  international business network in the mid- to late-1990s. Bout left SA after the US requested his extradition on money-laundering charges.  He was arrested in Thailand in March 2008 and extradited to the US.

Kremlin spokesperson Dmitry Peskov expressed surprise at the public remarks from Blinken. Russia has repeatedly cautioned Washington that such discussions are best conducted in private.

“So far there are no agreements in this area,” Peskov told reporters in Moscow. “When discussing such topics, you don't conduct information attacks.”

Russian foreign ministry spokesperson Maria Zakharova indicated that talks on prisoner exchanges had been going on for some time but without a result.

Families of hostages and detainees have been increasing pressure on US President Joe Biden, most recently in the case of two-time Olympic medallist Griner, who has been held since February. This may explain Washington's eagerness to make public statements about the negotiations.

For the two former Cold War foes, now grappling with the worst relations in a generation due to the war in Ukraine, the exchange would mark one of the more extraordinary prisoner swaps in their history.

Griner has pleaded guilty to the charges against her but has denied that she intended to break Russian law.

“I do plead guilty because of the actions that have happened but again, I did not intend to smuggle or bring any substance into Russia,” she told a Russian court on Wednesday.

Griner said she still did not understand how the vape cartridges containing hashish oil could have ended up in her luggage. The next hearing is set for August 2.

But she is unlikely to be swapped until there is a verdict — that could happen by mid August, her lawyers said.

“From a legal point of view, an exchange is only possible after a court verdict,” Griner’s lawyer in Russia, Maria Blagovolina, said in a statement.

The other American, former Marine Paul Whelan, who holds US, British, Canadian and Irish passports, was sentenced in 2020 to 16 years in jail for spying.

Russia said Whelan was caught with classified information in a Moscow hotel room where agents from the Federal Security Service detained him on December 28, 2018. He denies that he committed espionage.

Bout, a former Soviet military translator who the US said became one of the world’s pre-eminent arms dealers, is serving a 25-year prison sentence in the US. He has always proclaimed his innocence.

The subject of the book Merchant of Death and the inspiration for Nicolas Cage’s character in the 2005 movie  Lord of War,  Bout supplied military-grade weaponry to conflict zones around the world, according to US prosecutors.

In his arrest in Bangkok, US Drug Enforcement Administration informants posed as representatives of the Colombian rebel group Revolutionary Armed Forces of Colombia, or Farc.

Russia has said that the case against him was fabricated by US special services.

A federal jury in 2011 found Bout guilty on charges including conspiracy to kill US nationals and officers and conspiring to acquire and use anti-aircraft missiles. He was sentenced in 2012 to 25 years in prison.

Since Russia invaded its neighbour to the east in February this year, thousands have been left dead, injured and displaced, with the world economy in ...
World
1 week ago

Fate of Ukraine’s second-biggest power plant in the balance as Russia says it has overrun it, but Kyiv refuses to confirm
World
1 week ago
Next Article