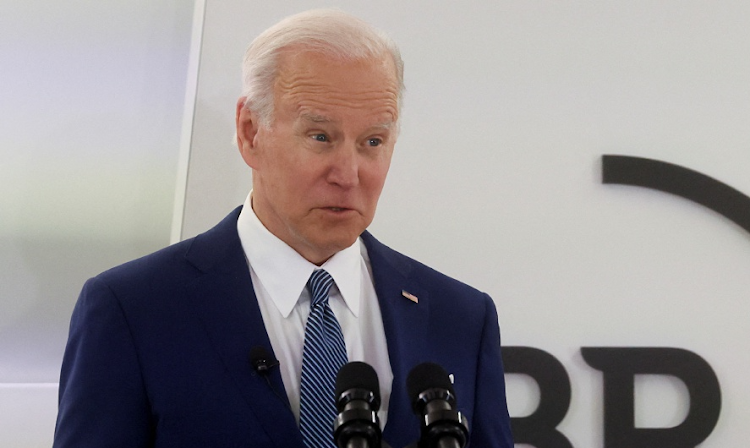 Mariupol/Kyiv— Ukraine’s military warned the public on Tuesday of more indiscriminate Russian shelling of critical infrastructure as US President Joe Biden issued one of his strongest warnings yet that Russia is considering using chemical weapons.

Russian troops have failed to capture any major Ukrainian city more than four weeks into their invasion, and are resorting to destruction of residential areas with air strikes, long-range missiles and artillery.

The southern port of Mariupol has become a focal point of Russia’s assault and is largely in ruins with bodies on the streets but attacks were also reported to have intensified on the second city of Kharkiv on Monday.

Biden, without citing evidence, said Russia’s false accusations that Ukraine had biological and chemical weapons illustrated that President Vladimir Putin’s “back was against the wall” and he was considering using such weapons.

“Now he’s talking about new false flags he’s setting up including, asserting that we in America have biological as well as chemical weapons in Europe, simply not true,” Biden said.

“They are also suggesting that Ukraine has biological and chemical weapons in Ukraine. That’s a clear sign he’s considering using both of those.”

The Russian embassy in Washington did not immediately respond to a request for comment.

Biden also told businesses to be alert for cyber attacks by Russia. “It’s part of Russia’s playbook,” he said.

The US and its allies have previously accused Russia of spreading an unproven claim that Ukraine had a biological weapons programme as a possible prelude to using such weapons but Biden’s remarks on Monday were some of his strongest on the subject.

Russia says it does not attack civilians though the devastation wrought on Ukrainian towns such as Mariupol and Kharkiv are reminiscent of previous Russian assaults on cities in Chechnya and Syria.

Putin calls the war, the biggest attack on a European state since World War 2, a “special military operation” to disarm Ukraine and protect it from “Nazis”. The West calls that a false pretext for an unprovoked war of aggression.

Biden is due to travel to Europe this week for meetings with allied leaders to discuss tighter sanctions on Russia, on top of the unprecedented financial penalties already announced. Ahead of the trip he discussed Russia's “brutal” tactics in a call with European leaders on Monday, the White House said.

Russia’s siege and bombardment of Mariupol, which EU foreign policy chief Josep Borrell called “a massive war crime”, is increasing pressure for action. But EU foreign ministers on Monday disagreed on whether and how to include energy in sanctions, with Germany saying the bloc was too dependent on Russian oil to impose an embargo.

Biden singled out India for being “somewhat shaky” in acting against Russia, its biggest supplier of military hardware, but praised the other members of the Quad group, Australia and Japan.

India has urged an end to the violence in Ukraine but has abstained from voting against its old Cold War ally Russia.

China, which has also declined to condemn Russia's assault, and its ally, Pakistan, shared concern about the “spillover effects of unilateral sanctions” on Russia, the Chinese foreign ministry said after a meeting of the neighbours’ foreign ministers. They called for a ceasefire and a diplomatic resolution of the crisis.

The conflict has driven almost a quarter of Ukraine's 44-million people from their homes, and Germany said the number could reach as high as 10-million in coming weeks.

A part of Mariupol now held by Russian forces was an eerie wasteland. Several bodies wrapped in blankets lay by a road. Windows were blasted out and walls were charred black. People who came out of basements sat on benches amid the debris, bundled up in coats.

About 8,000 were evacuated on Monday from towns and cities under fire, including about 3,000 from Mariupol, through seven humanitarian corridors, Ukraine's deputy prime minister said.

The governor of the Zaporizhzhia region said buses evacuating civilians from front-line areas were hit by shelling on Monday and four children were wounded.

The eastern cities of Kharkiv, Sumy and Chernihiv have also been hard hit.

Among the dead in Kharkiv is Boris Romanchenko, a 96-year-old Holocaust survivor whose flat was shelled by Russian forces last week.

“Please think about how many things he has come through,” Ukrainian President Volodymyr Zelensky said late on Monday. “With each day of this war, it becomes more obvious what denazification means to them.”

Ukrainian officials hope that Russia will negotiate a withdrawal. Both sides hinted last week at progress in talks on a formula that would include some kind of neutrality for Ukraine, though details were scarce.

The outliers are commodity producers which have rallied in the past month thanks to the surge in energy prices, with Angola and SA topping the list ...
News
3 months ago
Next Article