President Jair Bolsonaro has denied wrongdoing, saying on Monday he was not aware of any irregularities 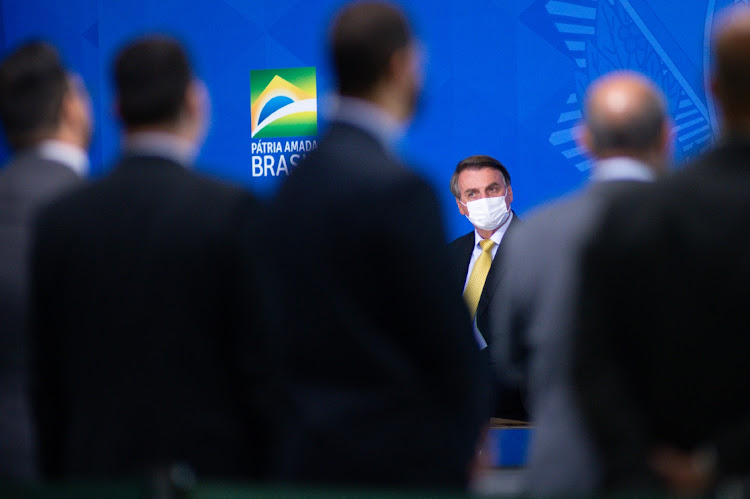 President of Brazil Jair Bolsonaro looks during an event to launch a new register for professional workers of the fish industry on June 29 2021. Picture: GETTY IMAGES/ANDRESSA ANHOLETE

Rio de Janeiro — Brazil will suspend a $324m contract for Covid-19 vaccine from India that has mired President Jair Bolsonaro in accusations of irregularities, the health minister said on Tuesday, following guidance by the federal comptroller, the CGU.

The deal to buy 20-million doses of Bharat Biotech’s Covaxin shot has become a headache for Bolsonaro after whistle-blowers went public with alleged irregularities. One health ministry official said he alerted the president about his concerns.

Bolsonaro, whose popularity has faded as Brazil's Covid-19 death toll climbed past 500,000, has denied any wrongdoing, saying on Monday he was not aware of any irregularities.

But thorny questions persist and may pose problems for him ahead of 2020’s presidential vote.

Health minister Marcelo Queiroga told a news conference his team would investigate the accusations during the suspension.

“According to the preliminary analysis of the CGU, there are no irregularities in the contract but, for compliance, the health ministry chose to suspend the contract,” the ministry said in a statement.

CNN Brasil had earlier reported that the ministry had decided to cancel the contract.

In a statement, Bharat Biotech said it had followed a “step-by-step” approach for the regulatory approval and supply contract of its vaccine in Brazil, and had not received advance payments from the health ministry.

It added that the pricing of Covaxin had been set between $15 and $20 a dose for supplies to governments outside India.

The deal is also being probed by a Senate panel investigating Brazil’s handling of the pandemic.

One leading opposition senator on the panel, Randolfe Rodrigues, filed a formal criminal complaint against Bolsonaro with the Supreme Court on Monday.

He asked the court to investigate why Bolsonaro “did not take any action after being notified of the existence of a giant corruption scheme in the health ministry”.

The worst water crisis in almost a century is fuelling inflation, presenting a challenge for Brazil’s central bank and the president’s re-election ...
World
2 months ago