Danish drugmaker Novo Nordisk says the virus attacks cells that produce insulin, so drugs that target these risk factors for Covid-19 should be a ‘very meaningful therapy’ 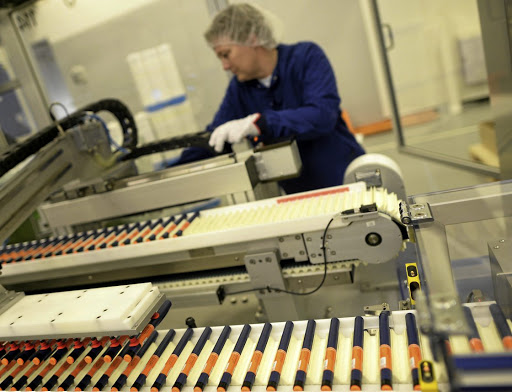 A Novo Nordisk employee works on an insulin production line in a plant in Kalundborg, Denmark. Picture: REUTERS

London — Novo Nordisk, the Danish drugmaker, is exploring whether a new class of medicines that helps people lose weight and control diabetes also has potential in fighting Covid-19.

He pointed to evidence that the coronavirus attacks cells that produce insulin, the hormone needed by patients with diabetes.

“The early indication is that the GLP-1 class is actually beneficial in Covid-19,” he said. “That’s not unexpected because this is the class of agents that target the risk factors for bad Covid-19 outcomes.”

GLP-1 drugs include Novo’s Ozempic for diabetes and Saxenda for obesity. Sales of such drugs, which also include Eli Lilly’s Trulicity and AstraZeneca’s Bydureon, totalled more than $11bn last year, according to a report from Grand View Research.

Novo, the world’s biggest maker of diabetes drugs, is studying the role such medicines could play as researchers and governments rush to find treatments to combat the coronavirus. Last month, the US cleared use of convalescent plasma — which uses blood from people who have recovered from Covid-19 to help those currently infected — on an emergency basis for some cases.

That added to a growing list of therapies available to doctors. In May, regulators granted emergency authorisation to the Gilead Sciences antiviral drug remdesivir, while dexamethasone, a widely available generic corticosteroid anti-inflammatory drug, has shown life-saving promise.

Patients with Covid-19 can suffer from an inflammatory condition in which the immune system overreacts to the virus, causing damage that is worse than the infection itself. Studies show that semaglutide, the key ingredient in Ozempic, “dampens systemic inflammation” in people with diabetes and obesity, Thomsen said.

Novo is carrying out further studies and will make the results public if it can substantiate the preliminary data, he said.

Novo has bet on GLP-1 drugs, including Ozempic, forecast by analysts to generate $3.4bn in sales in 2020. Saxenda is expected to cross $1bn in sales this year. Earlier this year the company completed the final stage of tests for semaglutide in obesity.

“Obesity, hypertension and diabetes are big risk factors for bad outcomes,” said Thomsen. “But it is also so that the virus puts further stress on your cardiometabolic condition.”