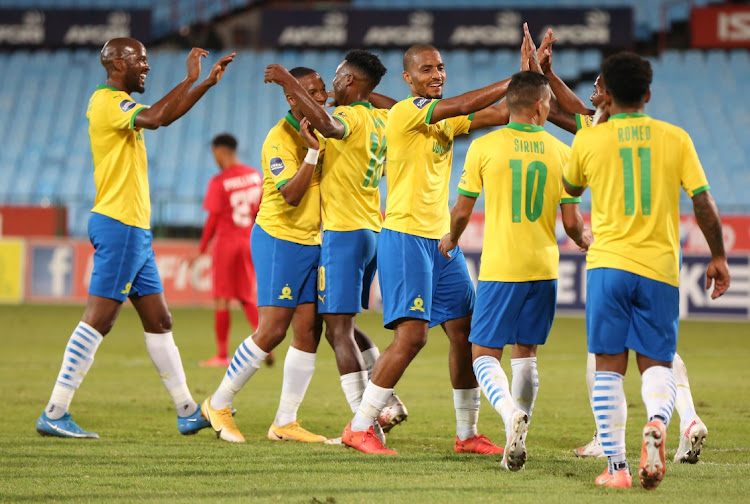 Themba Zwane of Mamelodi Sundowns celebrates goal with teammates during the DStv Premiership 2020/21 match between Mamelodi Sundowns and Supersport United at Loftus Versfeld, Pretoria, on 26 May 2021. Picture: BACKPAGEPIX/SAMUEL SHIVAMBU

This was the coronation of a swaggering, superbly slick and worthy Mamelodi Sundowns who are Premier Soccer League (PSL) champions for the fourth consecutive season.

The Brazilians have set the record of the first team of the professional era to win the league title for four successive seasons and they wrapped it up in domineering style with three matches in hand.

They clocked an unassailable 60 points at the top of the standings by toying and beating out-of-sorts 10-man SuperSport United 3-1 in the Tshwane derby at Loftus on Wednesday.

With this impressive win that was secured before halftime with goals by Lebohang Maboe, Aubrey Modiba and Themba Zwane, Sundowns ensured the championship race will not go to the last day.

This league title success is a huge one for co-coaches Manqoba Mngqithi, Steve Komphela and Rhulani Mokwena who were doubted in some sections when former coach Pitso Mosimane departed to join Al Ahly during the off-season.

Mngqithi, Komphela and Mokwena changed things around, including with the unpopular move of freezing out captain Hlompho Kekana and showing faith in new recruits Peter Shalulile, Kermit Erasmus, Mothobi Mvala and Gift Motupa.

What is left is for AmaZulu to fight for second place and earn a Champions League place and for Golden Arrows, Orlando Pirates, Swallows and SuperSport to battle it out for third spot that comes with a place in the Confederation Cup.

So far this season, Sundowns have only lost one match, to Kaizer Chiefs, and they will be hard pressed to avoid defeat in their remaining matches — against Swallows, Bloemfontein Celtic and Cape Town City.

The only regret for Mngqithi, Komphela and Mokwena will be that they did not make a mark in cup competitions as they failed to go all the way in the MTN8, Nedbank Cup and the Champions League.

Things didn’t look good for SuperSport from the beginning as they lost attacker Guily Manziba who was sent to an early shower by referee Victor Gomes after seven minutes for a reckless tackle on Mkhulise.

With a man down, SuperSport coach Kaitano Tembo was forced to change the system. He sacrificed midfielder Sipho Mbule after 18 minutes for Ghampani Lungu but the move did not have the desired results.

With the numerical advantage, Mngqithi, Komphela and Mokwena also reshuffled their team with Mkhulise replaced by Maboe. The move paid dividends as the substitute later opened the scoring.

On the half-hour mark, SuperSport nearly opened the scoring but Bradley Grobler was denied by the alert Onyango after he intercepted a poorly played back pass by his namesake and defender Brian.

Maboe proved to be an inspiring substitution as he opened the scoring for Sundowns after only a few minutes on the field when he connected with a delivery from Aubrey Modiba.

Three minutes later, the Brazilians took firm control of the match when Modiba’s long pass missed the intended target of Erasmus and flew into the empty net of Ronwen Williams for his first of the season.

Sundowns put the match beyond doubt three minutes before halftime through a close-range tap-in from the magnificent Themba Zwane, his tenth of the season. This time Modiba was the supplier.

United got a consolation through a thunderous goal by Teboho Mokoena five minutes from time but the damage had already been done as they remain sixth with two matches remaining.

In the dying minutes, defender Brian Onyango had to take the goalkeeper’s gloves after an injury to Dennis Onyango. There was no time left for him to be tested as the Brazilians crossed the line for their 11th PSL title.

Apology ignores veteran coach and his family, who were at the receiving end of vulgar insults
Sport
1 year ago