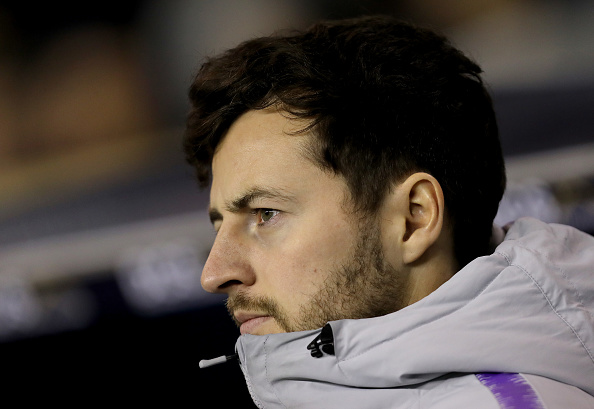 Ryan Mason, Tottenham Hotspur coach looks on prior to the FA Youth Cup Third Round match between Millwall and Tottenham Hotspur at The Den on December 17 2018 in London, England. Picture: GETTY IMAGES/JAMES CHANCE

Mason’s comments come in the wake of a sickening clash of heads between Wolverhampton Wanderers striker Raul Jimenez and Arsenal’s David Luiz in the Premier League at the weekend.

Jimenez underwent surgery on a fractured skull while Arsenal faced criticism for allowing Luiz to play on with his head bandaged before he was substituted at halftime.

Mason, who retired at the age of 26 after fracturing his skull in a clash of heads with Gary Cahill, has called for a change in perception on concussion within the game.

“We live in a world with men wanting to be brave. Not many will stand up and say, ‘I don’t feel right here’,” former England international Mason told Sky Sports.

“That’s the industry football is and we’re probably still a little bit guilty of that, if I’m being perfectly honest. I was very close to losing my life on a football pitch to an incident that was very similar.”

Mason said officials should be encouraged to punish players for dangerous aerial challenges.

“[David Luiz’s challenge] was late and it was from behind. If on the floor with a knee or ankle it would be a yellow card. This type of challenge is viewed as an honest attempt, which this one was,” Mason said.

“I think it was honest but I do believe we have a responsibility as professionals to punish dangerous play.”

Arsenal’s Arteta not concerned about job despite fifth defeat