Irish midweek side beat Maori All Blacks for first time 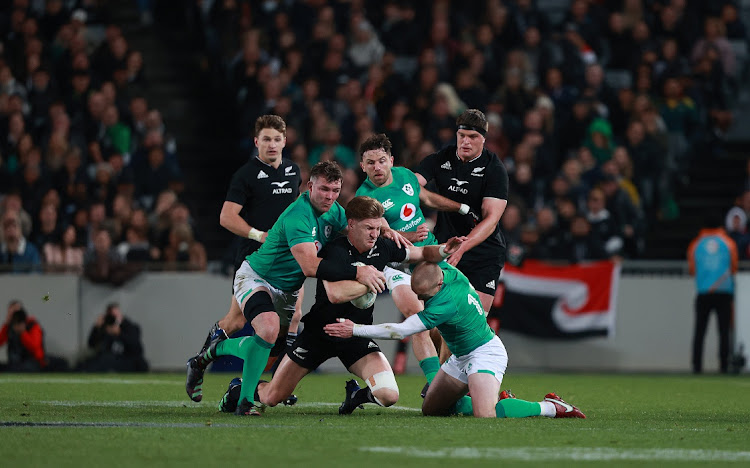 Jordie Barrett is supported by his brother during the International test match in the series between the New Zealand All Blacks and Ireland at Eden Park on July 2 2022 in Auckland, New Zealand. Picture: GETTY IMAGES/GREG BOWKER

Winger Jordan Larmour scored two tries as Ireland’s midweek side backed up the Test team with a breakthrough of their own on Tuesday, beating the Maori All Blacks for the first time with a 30-24 victory in the final tour match in Wellington.

Three days after the Test side earned a first victory over the All Blacks on New Zealand soil, the second-stringers rebounded from a 32-17 defeat two weeks ago for a maiden win in their fourth clash with the Maori.

Flanker Nick Timoney and No 8 Gavin Coombes also crossed and flyhalf Ciaran Frawley contributed 10 points with the boot as the tourists largely contained the free-running Maori in a highly disciplined performance.

The Maori opened the scoring through Shaun Stevenson in the third minute and were awarded a penalty try just after halftime when Connor Garden-Bachop was tackled early.

The hosts scored the best try of the game 10 minutes from time when replacement back Ruben Love broke down the left flank and exchanged passes with Cullen Grace before touching down.

Another Love break in the closing seconds resulted in a try for replacement scrumhalf Brad Weber but Larmour had already scored his second try two minutes from time to seal the victory.

The Test team take on the All Blacks on Saturday at the same Wellington Stadium, where victory would give them a 2-1 series win.