An emotional event for gymnast Caitlin

Her dad will not be there to cheer her on, but mom will be in her corner 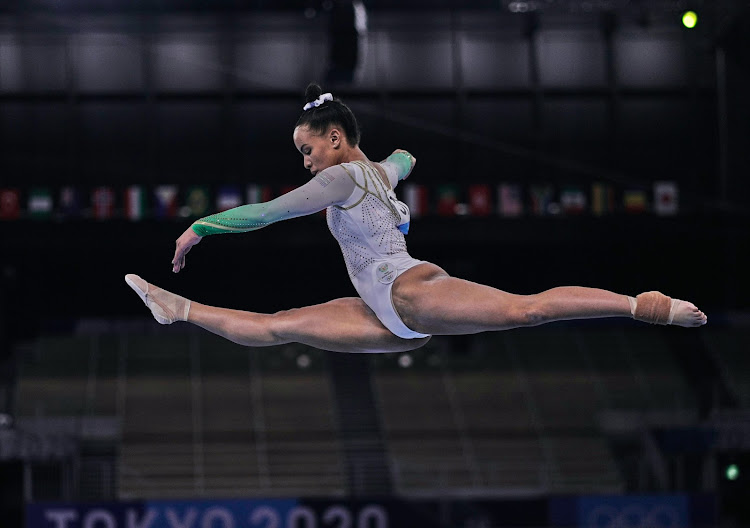 Caitlin Rooskrantz is aiming for a medal at the forthcoming Commonwealth Games in Birmingham, England. Picture: ULRIK PEDERSEN/NURPHOTO/SHUTTERSTOCK

Like most young sporting heroines, gymnast Caitlin Rooskrantz would love her dad to be in Birmingham, England, cheering her on as she chases the Commonwealth Games podium later in 2022.

But, unlike most of the Games athletes, Rooskrantz will have no dad in her corner after he tragically took his life when Caitlin was eight years old.

Earlier this month, SA celebrated Mothers Day and it’s fitting that in Veda, Caitlin has her own mother-in-a-million, the woman who has had her back ever since that day.

Ideally, mom would have been standing tall in Tokyo when Rooskrantz celebrated her sporting life with Team SA at the 2020 Olympics but the Covid-19 pandemic put an end to that, with no spectators allowed.

Caitlin also missed the previous Commonwealth Games in Australia due to reconstructive knee surgery in 2017, so she’s got every reason to be buoyant about Birmingham.

“Until now the Olympics were my biggest stage, and I came back with a personal best score. What excites me now is to compete in front of a full crowd with the accompanying adrenaline rush,” says Caitlin who turns 21 this year.

“I was very sad to miss the 2018 Games, but there really was no choice. Sport is about winning some, losing some. My best friend and teammate, Naveen [Daries] went to Gold Coast though and now we’re both on track to go to these Games which is all super-exciting.

Rooskrantz has been talked up as a medal hope on the uneven bars, but remains perfectly grounded. “My big goal is making the bars final, but the first goal is to go ‘clean’ and faultless — that way you can’t have done any better and if a medal follows that would be a bonus.”

This has been a busier week than most for Rooskrantz as she hopped, skipped and jumped between studies at University of Johannesburg, gymnastic training at Johannesburg Gymnastics Centre (she jets off to Bulgaria on Sunday for a World Cup event) and deals with visa requirements for Commonwealth Games duty.

When she matriculated in 2019 she was originally hoping for a criminal forensics career, but two gap years changed that. “I knew in my heart that I wanted to stay in sport some way. I’ve already created my own platform in both gymnastics and women’s sport so I want to build on that. I so love speaking to and inspiring the youth, especially in the smaller codes so I’m now studying a BCom marketing management degree to help me in that regard.”

Managing is something that mom Veda, a nurse, has qualified for a thousand times over after the family’s life was shattered in 2010.

“It was just so sudden, so traumatic,” she says of her husband’s death. “We went from being another ‘normal’ family forging our way through life to me being a single mom, trying to raise two children [Caitlin’s brother, Dazzle, is nine years older than her] at very different stages of their lives.”

But she had no option but to soldier on. “I simply couldn’t afford to fall apart. I resigned from my full-time job and worked part-time to be with my children as often as I could. I had to try to give them the best chance in life that I could.”

Her support group rallied around her.  “My mom, sister, and mom-in-law were dedicated to helping Caitlin grow up in a loving environment. I have to say her ‘gym family’ were life-saving, from coach Ilse Roets Pelser to the fellow gymnasts and their parents. They were [and still are] amazing.”

And despite the hardships, she says she’d do it all again. “The effort and stress has been totally worthwhile and Caitlin never stops telling me how much she appreciates it.

“And gymnastics has been a lifesaver to her ... it’s taught her so much about life in general. I can see personally how she makes a difference and inspires people from all classes and colours.”

As for Caitlin, the loss of her dad will always be with her but she says his memory lives on in her heart. “I was really young when it happened. Ever since then it’s just been me and my mom. I can’t ever commend her highly enough for what she does for me, in every aspect of my life.

“She’s been my everything. She still is. She’s my biggest rock. I’m truly blessed to have her.

“But there’s always a part of me that wishes my dad could have seen me compete. He was such a keen sports enthusiast and would have done anything to have got to watch me at something like the Olympics.

“I know he would have been so proud of me, in both my sports and life journey.”

When will the sports journey end? “For now I’m taking it all as it comes. Right now my next goal is the Paris Olympics which are two years away. I really want to go to an Olympic Games and have my mom watching from the stands.”

Paris is known as the city of love. Rooskrantz will go to the Games secure in the knowledge that the love from her own and her gymnastics family is real.