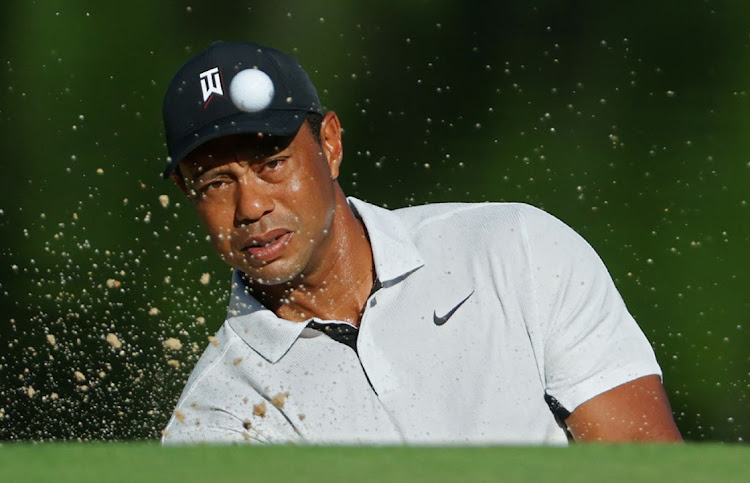 Tiger Woods of the United States plays a shot from a bunker during a practice round prior to the start of the 2022 PGA Championship at Southern Hills Country Club on May 16 2022 in Tulsa, Oklahoma. Picture: GETTY IMAGES/ANDREW REDINGTON

Tiger Woods’ comeback after nearly losing his leg in a car crash continues at the PGA Championship this week. The 46-year-old thinks he can hoist the Wanamaker Trophy for a fifth time.

Few athletes, especially those returning from career-threatening injuries, can get away with such bravado, but Woods, as he has shown time and again, is no ordinary athlete.

He has long maintained he would never enter an event he did not feel he could win. The 15-time Major winner made the same assessment of his chances in April before the Masters.

At that moment, however, it seemed barely credible, coming from someone who just 14 months earlier was lying in a hospital bed while doctors thought about amputating his mangled leg.

An inspired Woods sent a jolt through the sporting world when he made the cut at Augusta National before running out of steam, closing with six-over 78s on Saturday and Sunday, his worst-ever scores at the Masters.

Back at Southern Hills where he won the 2007 PGA Championship, Woods says he is stronger and better prepared. Now the only thing left is to “just go out there and do it”.

“I feel like I can [win] definitely,” Woods said. “I have to do my work. I’ve gotten stronger since [the Masters].

“But it’s still going to be sore. Walking is a challenge. I can hit golf balls, but the challenge is walking.”

Living by the motto “no pain, no gain”, Woods took a day off after the Masters and over the five weeks leading up to the PGA Championship continually increased his work load.

“He’s Tiger,” summed up world No 2 Jon Rahm. “He’s a competitor. He’s going to try to win every single time. Any time he tees up, the world wants him to win.”

Whether Woods can win is open to debate. But he, like everyone else, will be looking for signs of progress in the five weeks since the Masters, particularly in his endurance and putting, which he feels kept him from contending for another Green Jacket.

Masters champion Scottie Scheffler said on Tuesday that despite figuring out a winning formula that has produced one of the best runs in recent memory, he remains as hungry as ever going into the PGA Championship.

World No 1 Scheffler said that other than more requests for his autographs and people hollering his name, life has remained much the same.

“Winning the Masters is a huge honour for me. We’ve definitely been able to enjoy that a little bit,” Scheffler said at his pretournament news briefing. “After a little while, it’s kind of back to business. So I’ve been preparing and getting ready for this week.”

In his last Major, Scheffler enjoyed the biggest win of his career with a three-stroke Masters victory in April to extend an impressive run in which he won four times in six starts.

Phil Mickelson, who has not played anywhere since February, opts not to defend his title
Sport
1 month ago