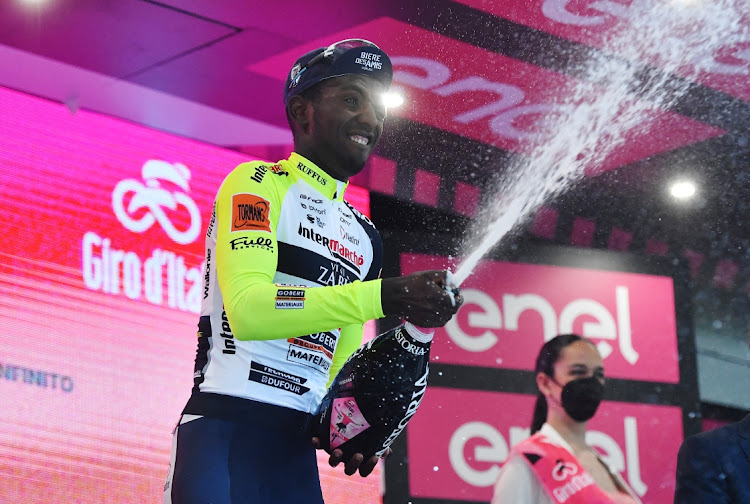 Biniam Girmay celebrates on the podium after winning stage 10 of the Giro d'Italia in Italy, May 17 2022. Picture: JENNIFER LORENZINI/REUTERS

Biniam Girmay’s Giro d’Italia has been cut short after an eye injury suffered during the celebrations of a stage win forced the Eritrean rider to pull out of the competition, his team Intermarche-Wanty-Gobert said on Wednesday.

While on the podium during the celebrations of his landmark win, Girmay placed a bottle of champagne on the floor as he attempted to open it, and was hit by its cork in his left eye.

He was taken to a hospital in the Italian town of Jesi for a medical examination after the incident.

“His injury is evolving in the right direction and will be followed up by a medical team in the next days. To minimise the risk of expansion of the haemorrhage and the intraocular pressure, it is strongly recommended to avoid physical activity.”

It was an unfortunate end to what was a landmark Giro for Girmay who earlier this year became the first rider from Eritrea to win a cycling World Tour (elite) race at the Ghent-Wevelgem classic.

“I was a bit sad about what happened with the champagne,” Girnay said in a video message. “When I came back to the hotel, my team was super happy but also a bit afraid. When [they saw] I looked OK, we really enjoyed, and I’m happy.”