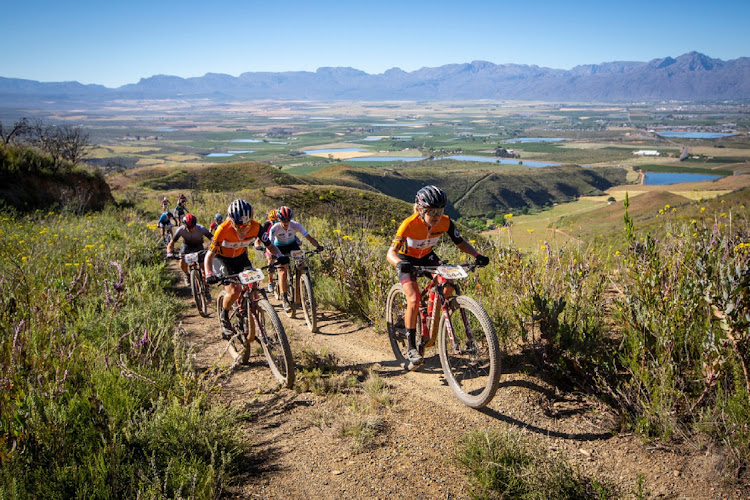 From the despair of a world champion and his dashed dreams, to the giddy delight of the leading women’s team of Sina Frei and Laura Stigger, whose dominance shows no signs of slowing after the fourth stage on Thursday, the Absa Cape Epic showed that just as it gives, so can it take away.

The Swiss-Austrian team of Frei and Stigger (NinetyOne-songo-Specialized) took their fifth win in five days, winning the stage from Saronsberg to Slanghoek by 4min 5sec from SA’s Candice Lill and Mariska Strauss (Faces CST).

Ariane Lüthi of Switzerland and SA’s Robyn de Groot (Salusmed) had a tough day of it after Lüthi crashed and they were 2min further back in third.

The shorter stage, just 73km, suited the shorter course cross country NinetyOne-songo-Specialized team, who now enjoy a 17:23 lead on general classification over Lüthi and De Groot. Lill and Strauss are 28:28 back.

The racing was full on from the start as Computer Mania’s Cherie Redecker and Adelheid Morath attacked. NinetyOne-songo-Specialized and Salusmed were forced to respond. Lill and Strauss joined in the fun and then Lüthi crashed. Frei and Stigger pulled away for what was a comfortable win.

“Going down the beautiful trails here, I enjoyed it,” said Stigger, who at the age of 21 has shown few weaknesses and taken to the marathon distances with gusto.

“We were going really well and feeling good,” said Lüthi. “Candice and Mariske were putting the pressure on, then I’m not sure what actually happened. I hit something, went down, and landed on a rock. It was incredibly painful. I gathered my bottle, but I think I was in a bit of shock from the crash and it took me a while to get going again.”

Said Lill: “Today was not the perfect day for us in any way. We had some struggles early on, but on days like this it’s the teamwork that counts, and on days like this if we can come in second when we still had a relatively bad day, that’s a good thing.”

It was a very bad stage for the Canyon-Northwave and Bulls 1 teams. A day after winning the third stage and shaping up for a tilt at the overall title in his first Epic, marathon world champion Andreas Seewald of Germany had to ride alone and out of contention behind the elite field after his Canyon Czech teammate Martin Stosek pulled out due to a stomach illness.

German Simon Schneller of Bulls 1, who had been second on GC after the third stage, was also affected by the bug, but opted to race and with Swiss partner Urs Huber came home almost 22min behind stage winners Hans Becking and José Dias (Buff Scott).

SA’s Matt Beers and Frenchman Jordan Sarrou (NinetyOne-songo-Specialized) were second, just 43sec later, and now lead overall by 6:42 from the Bulls 2 team of Germans Martin Frey and Simon Stiebjahn, who were third on the stage.

Italians Samuele Porro and Fabian Rabensteiner (Trek-Pireli) are third overall, 10:50 off the pace.

“It’s day by day. You have to see how you wake up in the morning,” said Dutchman Becking of the win. “Today I had super legs. We focused on the second half of the week, because it’s going to be hard over the next few days. You don’t have a lot of opportunities in the Cape Epic, so I looked Jose in the eyes, gave him a nod, and it was go time.”

Asked if he was worried about the heavy rain predicted around the Western Cape for the next few days, Dias smiled: “I am from Portugal and Hans is from Holland; it rains a lot there. So we say ‘bring it on’.”

For Beers, the plan to winning the Epic is consistency: “We kept it the same. Obviously, it’s a pity for those [Canyon and Bulls] guys. They are good riders. There’s a bug or something going around. I knew today would be full gas. I knew that this is the distance [Becking and Dias] are used to racing and they would light it up. They went full gas on the flat and we caught a break with the winds, which were cross and tail, and it worked out pretty well.”