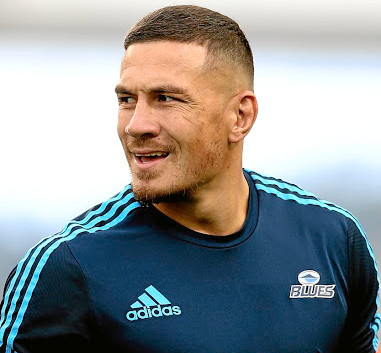 This week I posted a link to a piece in the Guardian by Don McRae on Twitter. It was an extraordinary interview with Sonny Bill Williams, the former All Black and perhaps the most talented rugby player, union and league, the world has seen for some time.

Now Twitter can be the place where good sense goes to be kicked, well, senseless, but not this time. A man from the Cape replied: “I used to loathe him. But I have admired him hugely for a while now, because he is the epitome of a sportsperson going off the rails — and then redeeming him/herself.”

Redemption. It is both easy and hard for athletes to find. Siya Kolisi redeemed himself without any of us really knowing he needed to when he admitted in his recently released book that he had got lost in alcohol for a bit, drinking so heavily he almost lost his wife. He used the booze to deal with his reactions when he was happy or sad. He found another way to get through stuff.

“Let’s say I’m someone’s role model,” said Kolisi. “The kid will think: ‘I want to be like you one day.’ But he doesn’t know the struggles you face. No-one tells him there’s temptation — alcohol, drugs, all these things are available to you.”

Williams dived into the temptation of alcohol and drugs when he was young, as an 18-year-old who had just signed for Sydney rugby league team Canterbury Bulldogs. He became a superstar almost instantly and did not know how to handle it, struggling with shyness and low self-esteem.

In his book, You Can’t Stop the Sun from Shining, he tells of being caught drinking and driving in 2005, and then finding solace in the Muslim community.

“We’re still in a place like that today,” he told McRae, “albeit in professional sports there’s so much talk about help at your fingertips from nutrition to mental health. But all we’re doing in sport is putting a plaster that gives temporary cover to our hurt on the inside. I would make a big mistake, like drink-driving, and I’m remorseful. I really need help but as soon as I start playing well again it’s like: ‘He’s reborn, he’s back!’ But my life is still full of trouble. I was playing some of the best footie I ever played, and living the so-called dream, but deep down I was very unhappy.”

He moved to Toulon at the urging of Tana Umaga in 2008, which saw him castigated, called a money grabber and sued by the Bulldogs. He eventually paid the Bulldogs R11m to get out, an amount his two-year contract in France did not cover.

His time at Toulon was a “blessing”. He became close to a Tunisian Muslim family and spent a lot of time with them, sometimes sleeping on their floor in the projects rather than the villa the club had provided for him. He saw how happy they were despite having so little. That put things in perspective mentally, helped him “put myself back together”.

Then Jonny Wilkinson, the 2003 Rugby World Cup-winning flyhalf, put him together on the field, showing him how to play union.

“I couldn’t have dreamt of all the help that Jonny gave me,” said Williams. “I came to France carrying a million-dollar debt, full of doubt, but I just jumped on that train, playing a game I had never played before, and it was humbling. I don’t know if I would have played for the All Blacks if not for Jonny. He really gave me that kick start of believing in myself as a rugby player. After the first couple of days I was thinking: ‘Man, what a good person he is’.”

Redemption? Williams found it by the heartful and then he paid it forward. Remember him giving his 2015 Rugby World Cup gold medal to Charlie Line, the kid who was tackled by a security guard after the final? They now have a “Gold for Good” charitable foundation that raises money for poor children around the world.

When he gave Line the medal his only condition was that he used it to “do good”. Redemption. It’s the grandest thing. The best of endings and new beginnings.