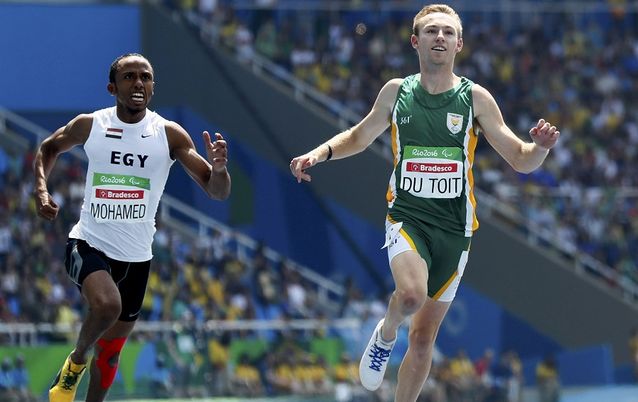 After he had finished fifth in a 400m race that showed just how exponentially the level of disabled sport is improving on Wednesday, Charl du Toit, SA’s flag-bearer at the Tokyo Games, called on South Africans to remember that disabled sport does not happen only at the Paralympics.

“Thank you to each and every South African who has supported this team over the last week or so, it’s appreciated. I’d also like to ask corporates and everyone to not forget about the Paralympians in the next three-year cycle,” said Du Toit, who ran 51.13sec in the race he won in Rio five years ago. In Tokyo, the world record was smashed to below 50sec and the Paralympic record Du Toit set in Rio broken by close on 2sec.

“It’s great having the support but we’d love it to be throughout the three-year cycle [until Paris 2024] and don’t let this be a hit-and-run approach. We need to see sustainability when it comes to support and for the next three years heading into Paris it’s important. But, these Games are not over, so please keep supporting these amazing athletes.”

It has been a constant refrain from SA disabled athletes down the years on the trend to celebrate them every four years instead of every day, a trend that has been prevalent since the country’s return from isolation at Barcelona in 1992.

Du Toit, who has cerebral palsy and is a double gold medal winner from Rio, would like all South Africans to know of the journey of a Paralympian, from adapting to overcome the hurdle of a body missing bits or not responding as it might. From training hours a week, the financial and personal sacrifices, to the body letting you down with just over 100m to go.

“Going into it I knew there were about four to five athletes capable of sub-51. With 150m to go I really thought I was in the mix and with 120m to go, I thought ‘I have this race actually’,” said Du Toit.

“It must have been a spasm or lactic acid hitting my CP [cerebral palsied] hip, but I then thought ‘let’s shake it off’. With 60 or 80m to go, lactic hit again. There’s not much you can do about it. If we could have the race again there’s nothing I would change.”

If Ernst van Dyk is to finally call it a day with an eighth place in the hand cycling in his eighth Paralympics on Wednesday, it would signal a change in the life of the 48-year old. He retired after Rio. Then came back. Once more unto the breach for Van Dyk?

“I said that it was my last [Paralympics] after Rio and here we sit again today. It’s hard to say, but one thing I’ve come to realise is that the level of sport in the Paralympic movement is getting higher all the time. It’s going to become harder and harder to compete at this level if you’re not a full-time professional athlete, especially in the classes where we have a lot of depth and a lot of competition,” said Van Dyk.

“To work full time and to try to balance that recovery, intensity and the rest of life will become very difficult for older athletes in the future. So, while I like being fit and I love competing, we will just have to see and see how I can fit things in with my professional life working for [prosthetic manufacturer] Ossur.

“The drive and the will is still there. I was well prepared today, it just didn’t work out for me. I always want to give my best and Paris is only three years away. That’s a short cycle in the build-up. I will never say never again, but this is the time to focus on a new season in life.”

Pieter “Supa Piet” du Preez, who won gold in the time trial on Tuesday, said he had “fun” in his combined class road race on Wednesday, also taking eighth. “Today was never a medal race, considering us H1s were in the same race as the H2s and they’ve got so much more function. I went hard the first lap to show I’m still the king after yesterday’s gold, but then decided to let the H2s get on with it and I was going to have a bit of fun.”

In other action on the day, Dyan Buis was 10th in the long jump; Kerwin Noemdi fourth in the shot put final, setting an African record (15,65m) and missing bronze by just 25cm; and Mpumelelo Mhlongo took fifth in the mixed class long jump for amputees and muscle impairment. Sheryl James, the 400m bronze medal winner, was third in her 100m heat, setting her on the way to making Thursday’s final.

The Rose of Bloemfontein wins 1,500m silver at Paralympics

The Rose of Bloemfontein wins 1,500m silver at Paralympics