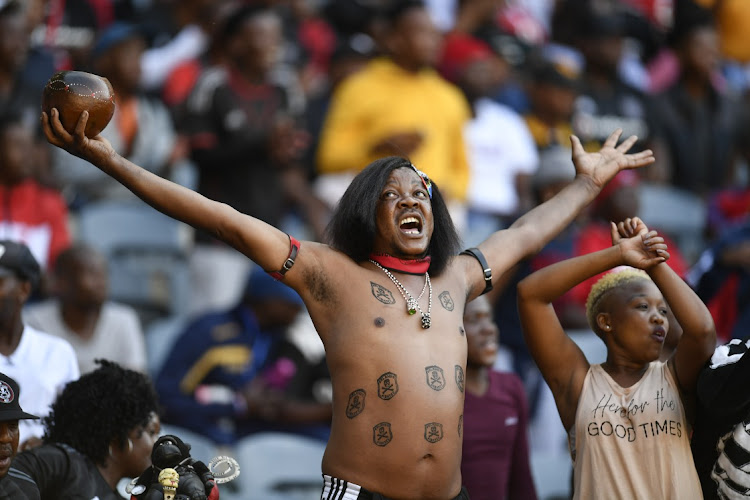 Supporters of Orlando Pirates during the Absa Premiership match between Orlando Pirates and Polokwane City at Orlando Stadium in Johannesburg, May 11 2019. Picture: LEFTY SHIVAMBU/GALLO IMAGES

The return of fans to stadiums moved a step closer after the SA Sports Confederation and Olympic Committee (Sascoc) submitted the first draft of a plan to make this a reality to sports minister Nathi Mthethwa.

Sascoc recently appointed a committee that worked with all sports federations on plans to manage and execute the process of allowing a controlled number of fans inside stadiums under stringent health and safety protocols.

Fans are also waiting to see if they will be allowed to watch the money-spinning British & Irish Lions Tour in July and August. The organisers are hoping to have a controlled numbers of fans in the stadium.

Sascoc president Barry Hendricks said all the federations had put a committee in place that compiled a draft proposal for the minister.

That draft went out to Sascoc members and then to sports minister Mthethwa, he said. The minister and his department would then process this first draft and return to Sascoc with their recommendations. “Then I think it will go to the command council.”

Hendricks said the proposals contained in the draft documents included input from all the federations and were put together with the safety of fans as a high priority.

“We are like other sports in other countries‚ entering into new terrain and we want to really make sure the environment we create is safe and responsible.”

Professional sport resumed activities in late 2020 under strict health and safety protocols as prescribed by the government‚ but there are growing murmurs of discontent as fans have not been allowed at venues since the outbreak of Covid-19 more than a year ago.

With the huge increase in the use of video and data, the modern scout needs a very different skillset to the men in sheepskin coats
Sport
3 weeks ago