This day in history: Senna triumphs at Monaco, on a day of tears 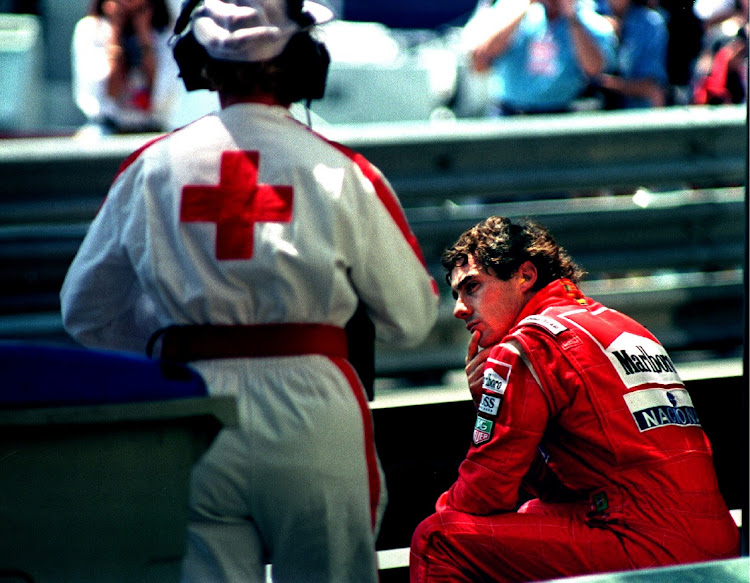 FILE PHOTO: ON THIS DAY -- May 22 FORMULA ONE - Ayrton Senna of Brazil is approached by a medic as he sits on the guard rail after crashing in the final practice session of the Monaco Grand Prix in this May 22 1993 file photo. Picture: REUTERS/MAL LANGSDON

May 22, 1993: Ayrton Senna of Brazil crashes during the final practice session of the Monaco Grand Prix but goes on to win the race and notch up five Monaco wins on the bounce.

McLaren-Ford’s Senna qualified third on the grid behind Alain Prost and Michael Schumacher and won an incident-packed race to pick up his fifth consecutive victory at the street circuit and the sixth of his career.

In his final year with the team, Senna won five races to finish runner-up behind long-time rival Prost in the drivers’ championship.

May 22, 1996: Juventus skipper Gianluca Vialli lifts the European Cup after his team beats Ajax in the final at the Stadio Olimpico in Rome to win the competition for the first time since 1985.

Juve striker Fabrizio Ravanelli gave the Italian side the lead before Jari Litmanen equalised for the defending champions late in the first half. With nothing to separate the two sides after extra time, the match went to penalties and Juve won 4-2 after Edgar Davids and Sonny Silooy failed to convert for Ajax.

May 22, 1997: Australia’s Greg Blewett is bowled by England’s Darren Gough in the first one-day international at Headingley, Leeds.

Australia were restricted to 170/8 in 50 overs and England chased down the total in the 41st over with Graham Thorpe (75no) and Adam Hollioake (66no) guiding the hosts home with a 134-run partnership.

Gough finished the three-match series as the highest wicket taker with seven wickets as England triumphed 3-0 after chasing in each match.

May 22, 1999: Manchester United goalscorers Teddy Sheringham and Paul Scholes hold up the FA Cup trophy after beating Newcastle United 2-0 in the final at Wembley Stadium.

It was a third English Cup and League double in six seasons for Alex Ferguson’s side, who had won the Premier League title a week earlier, but more glory was in store that season.

The following week, the team went on to beat Bayern Munich in dramatic fashion in the Champions League final to complete a glittering treble.

May 22, 2008: Chelsea skipper John Terry fails to score a penalty against Manchester United goalkeeper Edwin van der Sar during a shoot-out in the Champions League final at the Luzhniki stadium in Moscow.

Terry stepped up to take Chelsea’s fifth penalty with the scores tied at 4-4 after the final ended 1-1 following extra time. He slipped and his shot hit the post, forcing the shoot-out into sudden death where United went on to win 6-5.

“I’ve relived that moment every minute since it happened,” Terry, who was seen sobbing after the match ended, said a few days later. I have only slept a few hours and wake up every time hoping it’s all been a bad dream.”

May 22, 2009: France’s Sebastien Loeb settles for fourth place on the second day of the WRC Rally Italy after suffering a puncture.

Loeb went on to win the final two rounds of the season — Rally of Catalunya and Rally of Britain — to win his sixth consecutive world title.

Italy’s Modolo beat off competition from Giacomo Nizzolo of Trek Factory Racing and Team Sky rider Elia Viviani to sprint to victory in wet conditions. Spain’s Alberto Contador crashed 3.2km from the finish line to lose the overall lead of the race but he recovered over the next few stages to seal his second Giro title.

May 22, 2016: Rory McIlroy wins the Irish Open, his home tournament, at the K Club in County Kildare.

The Northern Irishman trailed Scotland’s Russell Knox by one shot with three holes to play before he shifted up a gear to finish with a birdie on the 16th and an eagle on the 18th.

“I don’t really get emotional when I win, but I was holding back the tears there,” said McIlroy. “To play like that and finish like that, with all of my friends and family watching was just so special.”

This day in history: Proteas triumph in England in 1998 ODI series

In football, Porto beat Celtic in extra time to win the Uefa Cup under coach Jose Mourinho in 2003
Sport
11 months ago

This day in history ... Liverpool and Real Madrid make headlines one year apart in the 1980s