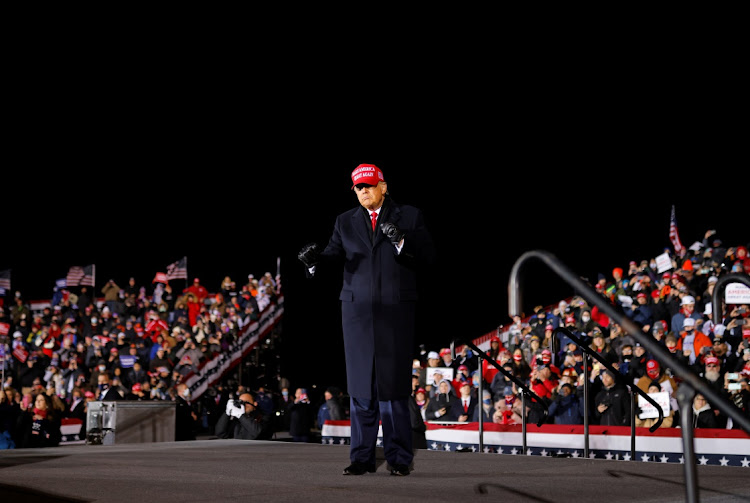 Every presidential election seems momentous, but it would be hard to exaggerate what’s at stake in this one. The voters who have already cast ballots in record numbers, and the tens of millions more who will do so on Tuesday, might be making the most fateful political choice of their lives. It isn’t just about choosing the better candidate. Also in the balance is a more fundamental question: what, if anything, does the US expect of its system of government?

Deciding between normal politics and the upheaval of the past four years is only part of it. The choice is also between a politics that aspires to persuade, unite and move forward, and a politics that accepts and even celebrates dysfunction. If, after everything the country has learnt during Donald Trump’s first term, America settles for the latter, its prospects seem bleak indeed.

After the election of 2016, it was possible to hope that Trump would grow into the presidency — that he’d reflect on the awesome power and grave responsibilities of the office, conduct himself with a modicum of dignity and sobriety, and try to bring Americans together. An optimist might have gone further, believing his detachment from the Republican Party and what it once stood for would create opportunities — for instance, to build a cross-party alliance for ambitious investment in infrastructure.

Instead, he became even more like Donald Trump. Vanity, vulgarity and prideful incompetence have been his hallmarks. The president’s Twitter feed occupies much of his time and, as far as one can judge, plumbs the depths of his mind. He has sometimes-shrewd political instincts, and correctly saw weak points in domestic and foreign policy that had gone unaddressed by successive administrations of both parties. Yet his ambition was never to take pains and work methodically towards progress. His principal goal throughout has been to slap down opponents and strut. It surely tells you something that, going into this election, the president didn’t bother to devise an actual programme of government.

His first term has been a nearly uninterrupted series of policy blunders, arising not from a coherent sense of direction, right or wrong, but from the momentary demands of politics as provocation. On issue after issue, he has set the country back.

The president boasts about the economy’s success before the pandemic, and it was indeed doing reasonably well: the post-crash recovery of the Obama years had continued on trend. But Trump’s tax cuts gave most of their benefits to the rich and failed to spur investment or faster growth. His tariffs and other trade-suppressing measures succeeded mainly in raising costs for US producers and consumers. If not for Trump, in other words, the economy would have grown faster.

The president has disdained domestic and international efforts to tackle climate change, perhaps the gravest long-term threat to prosperity. He has moved to dismantle the Affordable Care Act without thought for alternatives or for the harm that doing so will inflict on millions of Americans.

In 2016, the US had friends and allies, and much of the world’s respect. The president has blithely torn those relationships apart. He apparently sees international co-operation as wrong in principle — as a conspiracy against America — when for decades it has plainly served US and global interests. In foreign affairs, he cast himself as a hard-headed dealmaker while being repeatedly scorned or outmanoeuvred by despots. True to form, in the midst of a pandemic, he severed America’s links to global efforts to contain the disease.

The US response to the coronavirus has been among the worst in the world. The country stands close to the top of the global list of coronavirus deaths in proportion to population. (On that metric, the count stands at about 71 per 100,000. The figure for France is about 55; for Germany, about 13; for Japan, about one.) Granted, few Western governments can claim great success in this ordeal, but the US, with its unrivalled financial and human resources, could have hoped to do better. The federal government, with Trump presiding, failed at every stage to co-ordinate and prioritise, tasks no other level of government can readily undertake. Trump persistently ignored, undermined and contradicted the government’s own scientific and technical experts. Instead of setting a good example, he modelled irresponsible behaviour, then spun his own Covid-19 infection as proof of strong leadership.

What’s truly remarkable is that this endless catalogue of failures seems almost secondary when one considers the harm this president has inflicted on the nation’s capacity for self-government. Instead of resisting the slide towards bitterly tribal politics — the first duty of any responsible president — Trump has aggravated the problem, not out of inattention but as a deliberate strategy. From the start he has sought to divide, fanning the flames of racial resentment and seeking every other opportunity to antagonise his critics and embitter his supporters, regardless of the cost to friend and foe alike.

It must be admitted that some on the Left have, wittingly or not, served as accomplices in this effort to split the country into warring camps. In effect, out of justified disgust, many have accepted Trump’s toxic theory of power. This means that repairing the country’s fabric, starting in 2021, will be extremely challenging even for Joe Biden, who’ll be determined to try. But if Trump should be re-elected, he and his most furious opponents will see the project of radical division as vindicated, and pursue it further, with who knows what result.

Make America great again? Four years of President Trump has brought the country to a terrible low, in its own estimation and in the eyes of the world — and there is further yet to fall. Enough.

SONGEZO ZIBI: On the brink of political crisis: how will the US elections play out?

With the US election almost done, what matters most is whether there will be an orderly transition or not
Life
11 months ago

Though it seems unbelievable, and against the odds, there  is a possibility of Trump winning the US presidential election
Opinion
11 months ago