Why, if remote work is so great, would many creating the technologies that allow for remote work congregate in one place, Silicon Valley? 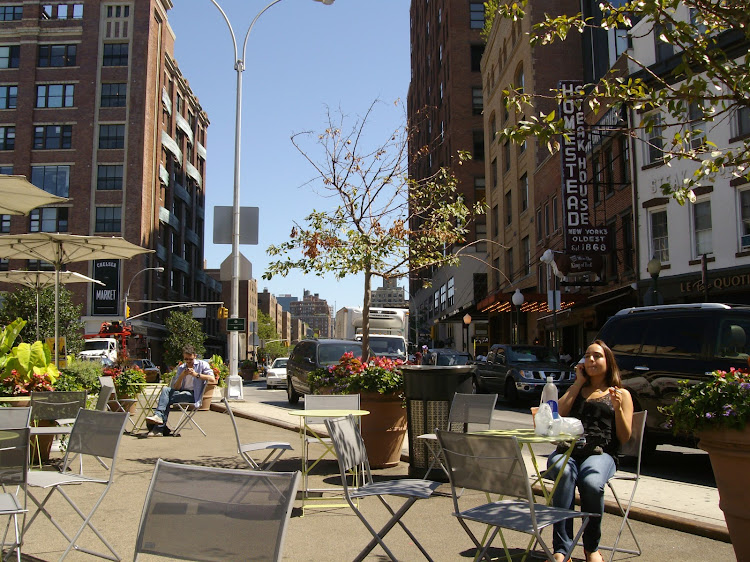 Manhattan, New York, where everything is just 15 minutes away. Picture KATY CHANCE

I’m writing this at 4.30am in 69m2, shared with my gynaecologist spouse, Siri, and two kids. The timing is a necessity, thanks to the utter US failure to respond to the Covid-19 pandemic. The size was a choice.

We moved from an already small apartment — small, that is, by US realtor standards; large by any other measure — to an even smaller one last year. Living in the middle of everything in downtown Manhattan is an enormous luxury, even — or especially — during the Covid-19 pandemic.

The supposed Covid-19-pandemic flight from cities has by now spawned its own genre in response: love letters to cities, from Jerry Seinfeld on down. Here’s mine, viewed through an unabashed carbon lens.

When moving in, I floated the idea of painting parts of our ceiling with global warming stripes. Siri nixed that idea, preferring white and suggesting that our home itself doubles as a symbol. Little did we know that these same stripes would soon appear a block away on the roof of the Detox Market.

For anyone who doubts the fundamental forces making cities so attractive, look no further than Silicon Valley. Why, if remote work was so great, would many of those creating the technologies that allow for remote work congregate in one place?

Silicon Valley, of course, is not a city. It’s suburbia. Everyone who can afford it gets a single-family house, a car (or two), and a carbon footprint to match. Cities are the most carbon-efficient places to live, suburbs the least.

The oft-heard choice among environmentalists is between city or country: Which one is better for the climate? Live in a dense, urban environment, or live in the sparsely populated countryside, off the land? That choice is an utterly false one.

The average US suburban household is responsible for roughly twice as much carbon as either urban or rural ones. The decisive factors: wealth and density

For one, many more, of course, do live in dense urban centres (globally, more than 50%) compared to the country (2% to 10%, depending on who’s counting whom).

“Oh, Paris?” “Well, actually, Ballainvilliers. Only 20 minutes by bus to the train. From there it’s a straight shot to Gare du Nord. 30 minutes.”

In the US, the average suburban household is responsible for roughly twice as much carbon as either urban or rural ones. The decisive factors: wealth and density. Wealth typically means more carbon emissions, density less. The country is relatively poor and sparsely populated, cities are relatively rich and dense.

Climate change, in many ways, is the ultimate negative externality. It’s only fair to pit it against the ultimate positive one: cities. Most importantly, wealth plus density creates real opportunities for significantly further carbon emissions cuts, beginning with urban mobility. We New Yorkers are looking enviously at Paris, London, Barcelona, and any place that prioritises people over cars. There, too, of course, having a functioning federal government would help.

Not everyone, of course, can share in this wealth, and cities put endemic inequalities and systemic racism front and centre. It’s one thing to be able to choose city life as the ultimate “luxury good”. It’s another to not have that choice and to bear the brunt of the consequences.

We have no choice but to make cities work for people and the climate. Fortunately, for every exasperating real estate story about the suburban dream, planted by a realtor specialising in suburban homes, there are plenty of positive examples, too. Even while Facebook and Google extended their work-from-home policy through to mid-2021 and are making plans for some permanently remote employees, other tech companies are pushing back.

Facebook itself, meanwhile, is leasing a further 6,780m2 of prime Manhattan real estate. Facebook still has plenty of footprint in Silicon Valley suburbia, but it, too, can’t resist a real city with real positive network externalities, not just its own virtual ones.

Guiding cities towards even lower carbon emissions, of course, requires smart policies that go further than more bike lanes. There are opportunities aplenty, from finance to building codes and well beyond. From our own personal experience, many low-carbon investments — from insulating to German Passive House standards to cutting the gas line pay for themselves many times over in quality of life.

Policy, of course, is key. Equally important is to realise that the question is not whether cities will persist, but how. The same goes for cities’ carbon impact. Cities cut carbon. They have the potential to do a lot more: cities, cut carbon!

Loathed ‘mansion tax’ the most workable for Britain

CHRIS GILMOUR: The posers will be back to their tricks in the office