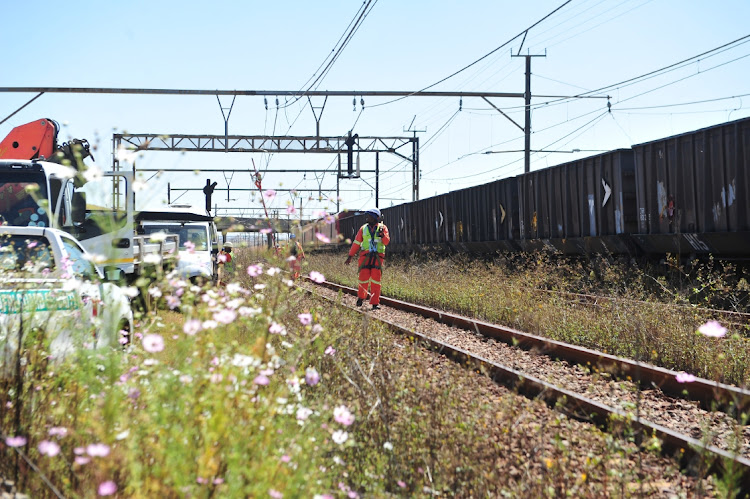 Workers from Transnet fix a section of a railway in Springs, Ekurhuleni, where a 1km copper cable was stolen. Picture: THULANI MBELE

SA’s economic woes are being compounded by the theft of huge amounts of copper from state-owned enterprises  Eskom and Transnet, much of which is smuggled overseas, costing the country billions of rand a year, according to market sources.

Eskom, which expects to make a R15.2bn net loss in its current financial year, told Reuters that “unrelenting” copper theft was costing it R5bn to R7bn annually, plus R2bn a year to replace stolen cables.

Transnet Freight Rail said copper thefts had climbed 177% over the past five years and had risen particularly sharply during the Covid-19 pandemic.

Hundreds of thousands of metres of cables were stolen in 2020, leading to about 20 trains being cancelled a day, according to the company, which said it had been forced to employ security drones and helicopters to stop criminal gangs.

“The cumulative damage of copper cable theft to the economy, Transnet, and the general public is staggering,” it said.

While copper theft is not a new phenomenon, the state companies and market players in SA say it has surged in recent years. Global demand for copper scrap has boomed due to tight supplies and low inventories, pushing prices to record highs.

Some SA scrap dealers buy stolen copper, melt it down, turn it into ingots and granules, which do not require scrap export permits, or remove identifying markers, four sources at local manufacturing and recycling companies told Reuters.

“There is almost no way to identify where scrap has come from once it’s been granulated, sheared or shredded as the processing machinery damages any identifying marks on metal surfaces” said Ross Bartley, head of trade and environment at the Bureau of International Recycling.

Previously unreported government data from confidential reports compiled for the scrap industry shows how the SA market has morphed.

The International Trade Administration Commission (Itac), the government agency responsible for export permits, granted copper export permits for 9,956 tonnes of scrap in 2019, a fraction of the 122,817 tonnes in 2012.

Six scrap and manufacturing sources said the scrap was leaving the country in more processed forms or in mislabelled cargo. However Itac said the decline in permits was largely down to more scrap deals being agreed domestically under the country’s Price Preference System (PPS), rather than a surge in smuggling.

The PPS, introduced in 2013, forced scrap exporters to offer local manufacturers material at a discounted rate.

Yet the industry sources said this had not significantly helped as the domestic prices for scrap were often far lower than the profits that could be gained from smuggling or selling it abroad.

A spokesperson at the SA Revenue Service declined to comment on how much the stolen scrap metal was costing the country.

Evert Swanepoel, chairperson of the Copper Development Association Africa (CDAA), which represents manufacturers that use copper scrap, said the illicit market was driving law-abiding firms out of business.

The CDAA’s membership has almost halved in the last four years and thousands of jobs have been lost due to manufacturers not being able to access the scrap they need as a basic material for manufacturing.

“If we don’t do something soon the industry is doomed.”

The government added an export levy onto the PPS in August to encourage more high quality scrap to stay in the country.

Donald MacKay, director of XA International Trade Advisors, estimated that this added about R300m a year in costs for legitimate scrap exporters.

“There is serious concern in the scrap industry over this,” said MacKay, who advises exporters on trade laws. “There’s an enforcement problem here.”

“Criminals who are illegally trading scrap metal are not going to develop a conscience when they need to make an export declaration.”

Reverting to diesel will however pose an environmental conundrum, CEO says
National
7 months ago