DA wants provinces to have power to hold referendums 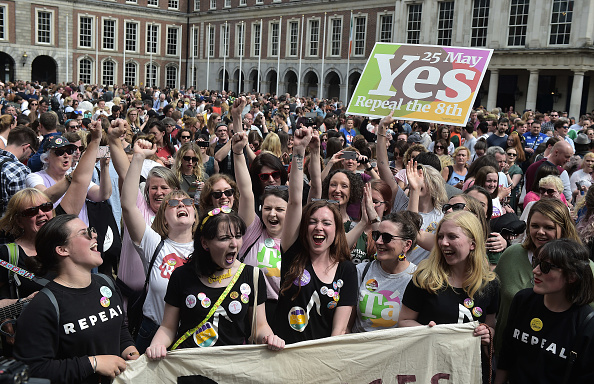 Yes voters celebrate as the result of the Irish referendum on the 8th amendment is declared at Dublin Castle on May 26 2018. Picture: CHARLES MCQUILLAN/GETTY IMAGES

The DA is finalising a private members bill which would give premiers the power to call a provincial referendum, the outcome of which would be legally binding on the national government if more than 50% of the voting population in the province voted in favour of it.

The proposed bill seeks to amend the Referendums Act to further the DA’s policy objective of achieving a greater devolution of powers to provinces in line with its commitment to federalism.

SA does not have a tradition of using referendums to test the views of the electorate on specific issues though other countries such as Switzerland and Italy make frequent use of this mechanism.

The most significant referendum held in SA was that of March 1992 to find out the views of white South Africans on whether they were in favour of a negotiated political settlement which would see an end to apartheid. There have been no referendums since the new democratic government was elected in 1994.

“In its current form, the Referendums Act only allows for the president to call a referendum and does not provide for a premier to call for a referendum in a province,” Mazzone said.

“The draft bill, therefore, seeks to address this omission by an amendment enabling a premier to exercise their constitutional powers to call a provincial referendum, to ensure that provincial residents can make their voices heard on important issues.”

These issues could include crucial service delivery issues in areas where the national government has failed, such as powers over the railways, the police, and electricity generation.

“It gives us the opportunity to give federalism back its power and give the people of the province a voice, which is the main idea behind federalism,” Mazzone said.

She believed that the governing ANC government had not used referendums to test the views of the electorate “as it is slightly afraid of the people. The more you centralise power the more you take away the voice from the average South African. That is what we need to stop happening. As South Africans we need to stand very firm and we need to make our voices very loud. Sometimes these referendums are going to be difficult for the government to handle”.

She believed that the apathy that people have towards politics would change once they have a direct say over policies.

The bill would set out the mechanisms for provinces to hold referendums and would require parliament to draw up rules in terms of which they would be held.

The DA will publish an explanatory memorandum of its proposed bill in the Government Gazette once it has been certified by the state law advisers as being constitutional. This is expected to happen in the next few weeks.

Mazzone stressed that there was still a need for referendums on specific issues even though people vote for the political party of their choice in provincial government elections. It could be, she said, that while a voter did not support the DA overall in the provincial elections, he/she might support a specific proposal put forward by the party in a referendum such as control by the DA-controlled Western Cape government over the police force, the railways and the ports.

The Western Cape has been fighting for a long time to have control over the police designated a provincial function.

The DA-controlled provincial government has long called for the devolution of powers especially over policing, energy and transport
National
3 months ago

Why empowering provinces could stimulate growth

Provinces need the power to develop their own tax incentives to attract business and tailor labour regimes suited to economic growth PICTURE: THE ...
Archive
5 years ago

Why empowering provinces could stimulate growth