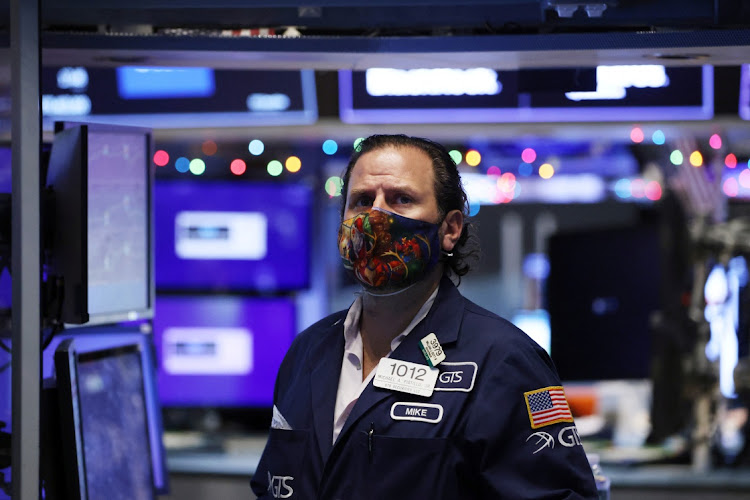 A trader works on the trading floor at the New York Stock Exchange in Manhattan, New York City, US, in this December 28 2021 file photo. Picture: REUTERS/ANDREW KELLY

Sentiment was supported, however, by signs that governments, despite coronavirus cases hitting record highs, are trying to limit the economic damage by relaxing rules on isolation rather than resorting to lockdowns.

Despite concerns, the view seems to be that the highly transmissible Omicron Covid-19 variant will be less lethal than feared, Holger Schmieding, chief economist at Berenberg said.

There was relief too in Asia where South Korea’s 5.1% industrial output surge may indicate some easing of supply chain problems. Chinese shares got a nearly 1% lift from Beijing signalling lower interest rates in 2022, though they are set to end 2021 down 5.5%.

Japanese shares in their last trading day of the year, slipped 0.4% — a 4.9% annual gain but short of a three-decade top reached in September.

Shares in semiconductor superpower Taiwan ended with a 24% annual jump.

However, persistent inflation and a resulting hawkish turn by the US Federal Reserve is a source of concern for markets, with investors starting to price in a first rate hike as early as March.

Two-year US Treasury yields have shot up 55 basis points since September to stand at 0.75%, near the highest since March last year. However, reflecting expectations of a relatively short and shallow rate-rise cycle, 10-year yields have reacted far less, rising about 20 bps in this period. They are up 4 bps for the week but eased 1.6 bps on Thursday.

The rise in US borrowing costs has lifted German 10-year yields to -0.19%, nearly a one-month high and up 15 bps since September.

The Fed outlook has combined with recent Omicron jitters to underpin the US dollar, which is set for a second month of gains. The greenback rose 0.4% against a basket of currencies to 96.2, bouncing off a three-week low touched on Wednesday when it was hit by the risk appetite revival.

The yen meanwhile has run into broad year-end selling over the past week, with the dollar reaching its highest since mid-November at 115.06 yen.

“The front end of the US rates market is pricing more rate hikes back into the curve now so FX may be a battle, once again, between optimism about the global recovery and expectations about the Fed,” said Kit Juckes, a strategist at Societe Generale.

However, oil prices slipped, hurt by demand growth concerns and news that China had cut its first batch of 2022 crude oil import quotas by 11% in a sign it would act against small inefficient refineries.

However, Brent has climbed more than 50% this year, adding to the global inflation pulse. The impact showed up in Spanish data showing that the annual inflation rate for December was the highest year-end reading since 1989.

China cut the first batch of crude import allocations for 2022, offsetting the impact of US data showing fuel demand has held up despite Omicron
Markets
7 months ago

JPMorgan is bullish on Japan’s automakers, real estate machinery and IT services in 2022.
News
7 months ago

Gold on course to record its worst performance in six years

Prices steady above the key $1,800 per ounce level in thin trade as a weak dollar countered pressure from firm Treasury yields
Markets
7 months ago
Next Article

JSE faces mixed Asian markets as it looks to hold onto 73,000 high

JSE faces mixed Asian markets as it looks to hold onto 73,000 high