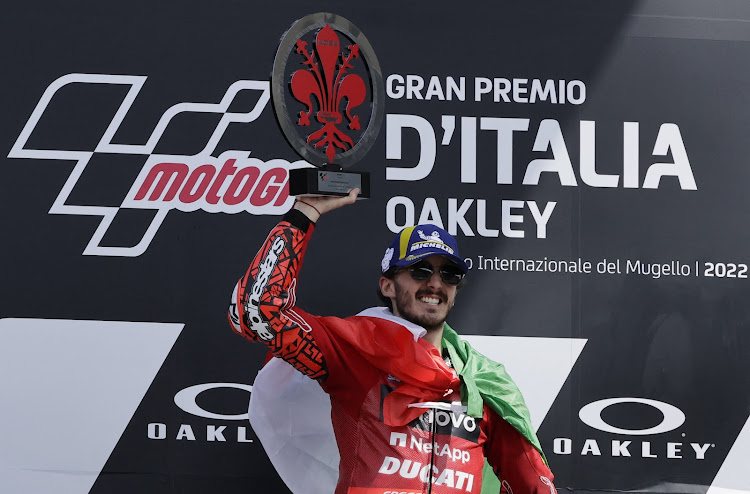 Bagnaia is fourth in the championship standings after winning his home race in Mugello. Picture: REUTERS

Ducati's Francesco Bagnaia held off a spirited challenge from reigning world champion Fabio Quartararo of Yamaha to win the Italian Grand Prix in front of his home fans at the Mugello Circuit on Sunday.

From fifth on the grid, Bagnaia had a bad start as he dropped to ninth on the opening lap but the Italian fought back to slowly make his way to the top.

With 15 laps to go, Bagnaia overtook Marco Bezzechi of Mooney VR46 Racing Team in first place with a brilliant move heading into the first turn.

Bagnaia held on to his lead for the rest of the race and finished 0.635 seconds ahead of Quartararo, securing his second win of the season after the Spanish Grand Prix.

“It feels incredible,” said Bagnaia, who became the third Italian to win for Ducati at Mugello.

“I think the team and me deserve this win because we worked a lot. The start was not the best but I am happy to win the race. At home, in front of our fans, it is really great.”

Quartararo extended his lead at the top of the riders' championship, sitting eight points ahead of second-placed Espargaro and 28 ahead of Enea Bastianini in third.

“It was basically the best race of my career, to be honest,” said Quartararo. “I was feeling bad all weekend, then I made an amazing start … before the race I had nothing to lose because my pace was not so good.

“I was riding at my best today and I'm so happy. In France, it's Mother's Day, so I want to wish a good one to my mum.”

Johann Zarco gave Ducati another reason to celebrate when he finished fourth, while rookie Bezzechi had his best MotoGP finish in fifth. Ducati's Luca Marini was sixth.

SA's Brad Binder (KTM) finished seventh after qualifying 16th. His brother Darryn was 16th and just outside the points.

Six-times MotoGP champion Marc Marquez was 10th on his Repsol Honda in what was likely his final race of the season, with the Spaniard set to undergo a fourth surgical operation on his arm next week.

Pole sitter Fabio Di Giannantonio of Gresini Racing had to settle for 11th.