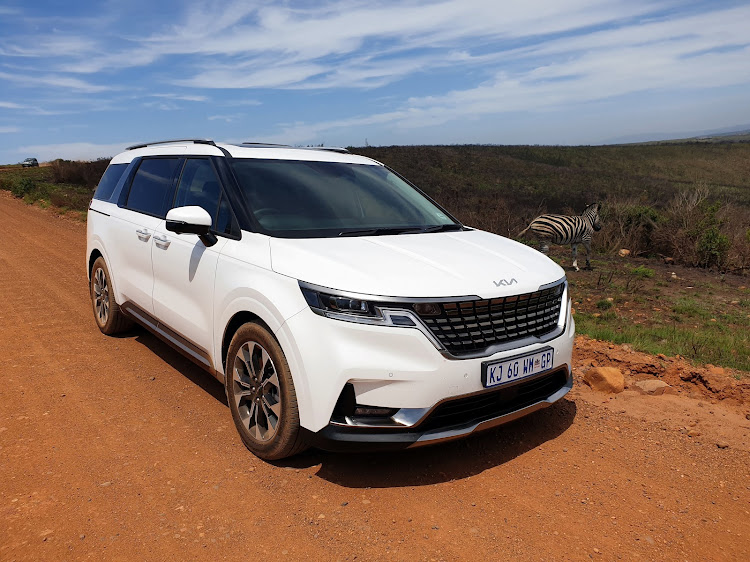 New Carnival earns its stripes as a roomy and well-specced family vehicle. The styling pops out too. Picture: DENIS DROPPA

The first million-rand Kia has touched down in SA. It is the new Carnival premium family bus in top-of-the-range SXL execution, offering high-end features such as 12-speaker Bose surround sound and electric front seats that can be heated and cooled.

The Kia Carnival replaces the outgoing Grand Sedona as Kia’s flagship product, and also its largest, and has gone on sale in a range of four models offering either seven or eight seats.

Many consumers won’t associate Kia with a R1m price tag, but the Korean brand has long moved on from its budget origins and builds cars that match or exceed the build quality of Japanese and European rivals.

Cars such as the Sportage, Rio and Picanto have cemented the brand’s reputation as a high-quality “challenger” brand over the past decade, while newer offerings such as the Seltos and Sonet have boosted its sales more recently.

“We are now finding our place at the main table, and our sales performance in 2021 solidified that,” said Gary Scott, Kia SA’s CEO, at the launch of the new Carnival range in SA last week.

Kia’s local sales increased 48% compared with the year before, significantly exceeding the 22.1% growth of SA’s overall new-car market last year. It has grown into the country’s sixth-biggest passenger car brand ahead of Nissan and Ford.

Still, R1m for a nonpremium brand?

The company admits that large family movers are becoming expensive, with the market segment experiencing a 31% sales dip over the past five years. But it says the Carnival has a value-for-money edge over rivals such as Volkswagen’s Caravelle and the Mercedes-Benz V-Class, which both cost more and have fewer features. 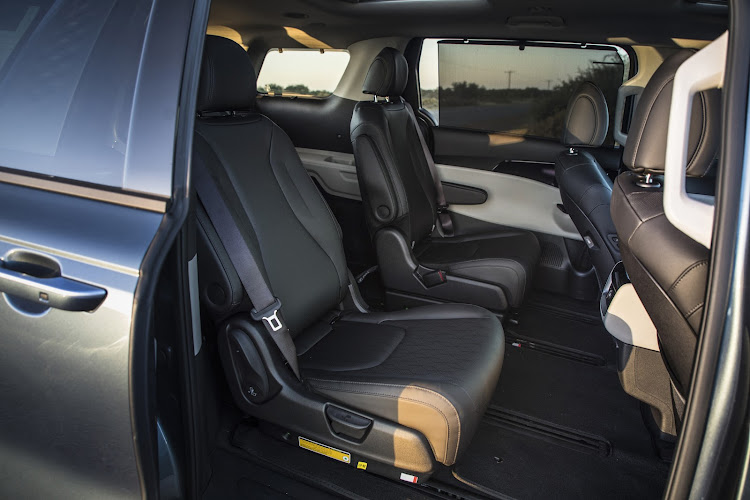 Space is bountiful in the three rows of configurable seats. Picture: SUPPLIED

Next up is the EX+, which adds items such as powered rear sliding doors on both sides, an electric tailgate, smart entry with push-button start, seven USB ports, an extra seat, and automatic climate control.

Just below the top-tier model is the SX Limited, which I drove at the media launch in the Eastern Cape and Western Cape last weekend. It adds electric adjustment for the front passenger seat, a 12.3-inch touchscreen, heated and ventilated front seats, and wireless smartphone charging to the tally.

It also has advanced driver assistance systems such as smart cruise control and lane-keeping assist.

Aside from its abundant features, the Carnival is a family vehicle with bountiful space and comfort, with an upmarket cabin trimmed in stylish materials and soft-touch surfaces.

The eight-seater has two seats up front and a pair of three-seat benches behind, while the seven-seater has a 2+2+3 layout in three rows.

There is copious room all round. In the seven-seater the second-row seats have the same adjustability as the front two, and with all seats in place the Carnival has a generous 1,139l of luggage capacity. With the second row removed and the third stowed flush with the floor, cargo space increases to a massive 4,110l. 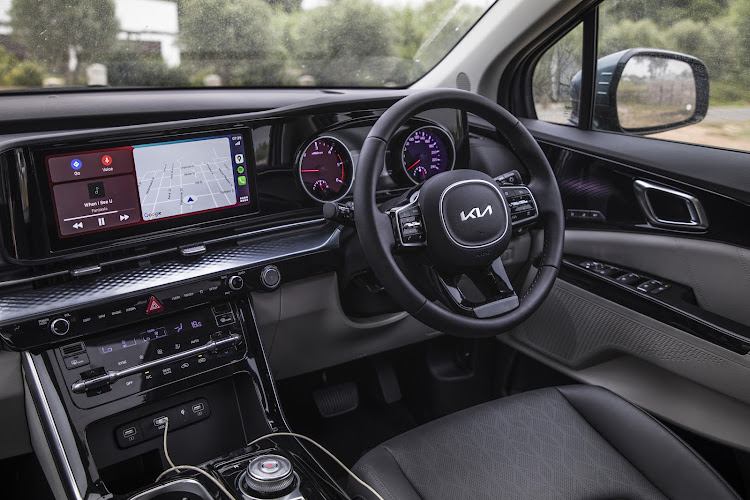 Heated and ventilated front seats are among the comforts offered in the two top models. Picture: SUPPLIED

Though Western Cape temperatures exceeded 40°C during our drive, the aircon didn’t struggle to cool the large cabin, and the ventilated front seats were very appreciated too.

The Carnival cruised with a refined and easy gait, its new-generation “Smartstream” 2.2l turbo diesel four-cylinder engine sending a relatively punchy 148kW and 440Nm to the front wheels via an eight-speed automatic transmission. It provided sufficient urge to confidently overtake long trucks, and displayed minimal low-rev turbo lag at sea level. Most impressively, the large vehicle sipped just 7.3l per 100km in the mostly open-road cruise.

Parking this big boy isn’t the easiest task, but on the road the Carnival masks its sizeable 5,155mm length with driving dynamics more reminiscent of a sports SUV than a bus. It corners without feeling ungainly and has a relaxing ride quality even on rough gravel.

The styling isn’t very bus-like either. With its streamlined roofline the Carnival looks more like an SUV than a soccer mom’s MPV, with its LED lights and oversized grille right on point in terms of modern design.

Includes a five-year/unlimited kilometres warranty with roadside assistance and a six-year/90,000km maintenance plan.

Replacing the H1, the streamlined bus comes in nine or 11-seat options
Life
6 months ago