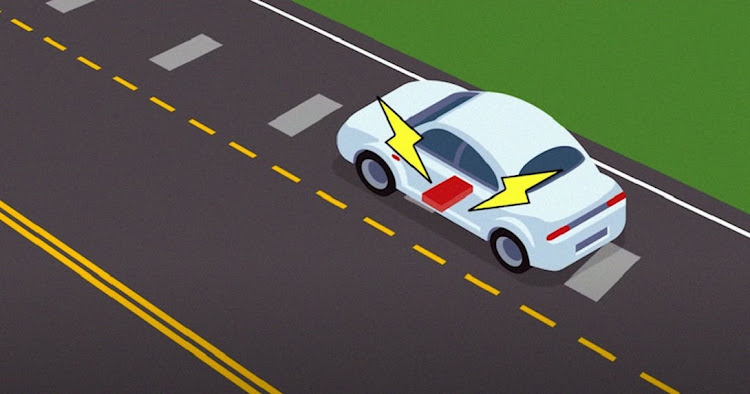 Magnetic plates embedded in the road could charge electric vehicles on the go. Picture: CORNELL UNIVERSITY

Range anxiety is the fear drivers have that their electric vehicle’s (EV’s) battery will run out of charge before they can reach a charging point or their destination. This, together with long charging times, are two of the main factors preventing mass consumer uptake of electric vehicles.

Researchers at Cornell University in the US have come up with a potential solution to both problems: a special roadway that charges vehicles’ batteries as they drive over its surface.

It means that drivers running low on battery power wouldn’t have to pull off and find a charging station; they’d simply change lanes and drive over special charging strips embedded in the road.

It’s the idea of Khurram Afridi, Cornell associate professor of electrical and computer engineering, who envisions roads embedded with metal plates creating electric fields that can charge a vehicle’s battery as they pass over. The charging lanes would be able to identify which car went into the lane and send the driver an invoice.

“Drivers are no longer tied to individual EV charging stations, allowing them to travel while simultaneously charging their cars’ batteries,” Afridi told Insider.

“The only way people are going to buy electric cars is if they’re just as easy to refuel as combustion engines. If we had this technology the electric vehicles would have even less limitations than traditional ones.”

The technology could also be used autonomous forklifts in factories and other mobile machines, while they remain in motion.

The idea of wirelessly powering moving vehicles isn’t new. The science behind it goes back over 100 years to Nikola Tesla, the inventor who used alternating electric fields to power lights without plugging them in.

But so far it’s proven too costly to commercialise the technology on a large scale, as converting existing roads would be an enormous undertaking. However, it’s a good time to revisit the idea now that car manufacturers are moving en masse to EVs within the next couple of decades and a growing number of countries are announcing they will soon ban internal-combustion cars, including Norway which plans to ban the sale of fossil fuel-powered cars in 2025 and Britain in 2030.

Afridi’s built a prototype that can power vehicles from 18cm away, and says the technology is 5-10 years away. A starting point, he believes, could be to focus on cities, installing charging strips at stop signs and traffic lights, so drivers could recharge while they wait.

Even though it is seven times cheaper to drive an EV than an internal combustion engine (ICE) vehicle in terms of fuel cost, vehicle affordability, range anxiety and long charging times remain the main barriers to entry.

We undertake a range-anxiety test by driving from Joburg to Durban in a Jaguar I-Pace, using not a drop of fuel
Life
2 years ago

The iconic 911 will continue as a hybrid, or with a petrol engine that runs on clean e-fuels
Life
10 months ago
Next Article