Amazon, Facebook and Google have had their time over the barrel during the Trump era ‘techlash’ — now it is Apple’s turn 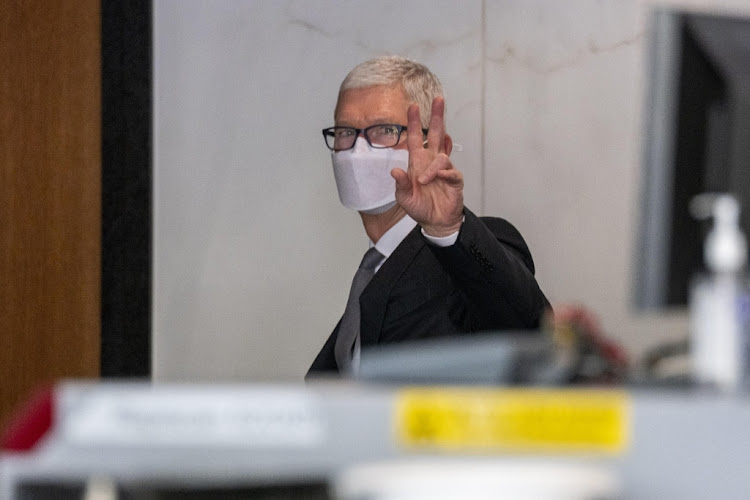 Apple CEO Tim Cook might not have shared the values of Donald Trump but he knew how to get his ear. While the CEOs of Facebook and Alphabet’s Google faced accusations of anti-Republican bias — and Amazon’s Jeff Bezos openly feuded with the former president — Cook dined with Trump at his Bedminster, New Jersey, golf club and cultivated relationships with his children.

The payoff? When Cook had a problem, he needed only to pick up the phone. “Others go out and hire very expensive consultants, and Tim Cook calls Donald Trump directly,” Trump said in August 2019, speaking in the third person. “Whenever there’s a problem, he’ll call.”

On May 21, Cook sat about 4,000km away from the Oval Office in a Californian courthouse, testifying in a lawsuit brought by developer Epic Games that his $2-trillion company faced “fierce competition”. Some of the toughest queries came from the judge in the case, which involves whether the company has too much power over its app market. A decision by Apple to lower costs for some developers “wasn’t the result of competition”, judge Yvonne Gonzalez Rogers said. “That seemed to be a result of the pressure that you’re feeling from investigations, from lawsuits.”

Amazon, Facebook and Google have all had their time over the barrel during the “techlash” that began in the Trump era. Now it seems it’s Apple’s turn. The US’s largest company by market value, Apple, spent much of the last administration out of the legal and political spotlight. As Republicans and Democrats alike trashed the other companies as monopolies, Apple’s stock price rose 340%, besting not just the 70% rise in the S&P 500 but also the performance of the other tech goliaths.

Apple wasn’t let completely off the hook — Cook testified right alongside the other CEOs at a congressional antitrust hearing in July 2020 — but the company tiptoed past most of the controversies that ensnared its peers.

This trial is emblematic of Apple’s growing problems. It concerns the company’s App Store, the sole option to download applications for more than 1-billion iPhone users. Apple takes a cut of as much as 30% of each sale on the store and another cut whenever users make in-app purchases.

When Epic Games, the developer of the wildly popular Fortnite, tried to replace Apple’s in-app purchase system with its own, Apple banned it from the store, leading to the lawsuit and accusations of anticompetitive practices. The judge is expected to make a decision in the northern hemisphere summer about whether Apple can maintain its stranglehold on what apps are available to users. (Apple has said that it faces strong competition in the smartphone market, that the App Store is a thriving ecosystem of third-party apps, and that its commission is in line with what rivals like Google and Samsung charge.)

Congress has also taken aim. In April, Apple and Google executives, as well as third-party developers, testified to the Senate judiciary antitrust subcommittee about the companies’ app stores. Most of the legislators’ ire fell on Apple, which had initially refused to send an executive to the hearing but reversed course amid bipartisan pressure.

Though the developers said they felt taken advantage of, Apple chief compliance officer Kyle Andeer, like Cook, described the competition his company faces as “fierce and fair”. Some senators didn’t buy it. “If you presented this fact pattern in a law school antitrust exam, the students would laugh the professor out of the classroom, because it’s such an obvious violation of our antitrust laws,” said Connecticut Democrat Richard Blumenthal.

Legislators took another swipe at the company in May, after a New York Times investigation said it had ceded control of Chinese customers’ personal data to the government in Beijing. Apple had dropped some of its usual encryption practices and consented to storing the data with a state-owned company to protect access to the market, the Times reported.

“I guess @Apple and @tim_cook see an endless frontier of profits by aiding and abetting a communist dictatorship’s mission to trample on basic freedoms and human rights,” said Florida Republican senator Rick Scott in a tweet. Apple told the Times it had never compromised the data of its Chinese customers.

The political pressure Apple and other tech companies face has been uncomfortable but, in the real world of dollars and cents, pretty uneventful. Legislators often threaten to bring businesses to heel, but even with bipartisan agreement it’s tough to move a bill to the starting line, let alone to make it law. In recent years, Democrats and Republicans have introduced more than a dozen bills to curtail social media companies’ protections from liability for what their users post, but none have gone anywhere. Legislators’ angry words against Apple aren’t likely to go much further.

The real threat, not just to Apple but to every big tech company, is the government’s antitrust enforcers, who have spent the past few years quietly working behind the scenes. In 2020 federal and state agencies filed multiple antitrust lawsuits against Google and Facebook. The attorney-general for Washington, DC in May hit Amazon with its first antitrust lawsuit in the US. Apple hasn’t yet faced a similar suit, but the US department of justice as recently as January interviewed at least one developer for an investigation, Bloomberg News reported.

Indeed, Cook’s testimony in the Epic trial recalled another big moment in antitrust history more than two decades ago, when the justice department sued Microsoft in 1998. Then CEO Bill Gates faced his own deposition that year, sparring with then federal attorney David Boies in such an absurdly pedantic fashion it made the judge laugh out loud. The lower court ordered the break-up of Microsoft, but the company won its appeal and settled.

Even so, Apple and the other tech companies probably hope that case isn’t a harbinger. Microsoft won, but its executives said the pressure made the company careful to avoid business expansions that would have brought more scrutiny. That left more room for new companies, such as Google, and reimagined companies, like Apple, to grow into the behemoths they are today. It will be of little solace to Apple’s investors if it wins in court but misses whatever tech revolution comes next.

The suit was filed a week into a US trial over Epic Games’ claims that Apple is running its store like a monopoly, cheating developers and consumers
Companies
1 year ago
Next Article

Wanted Online: Art and about: Five local exhibitions not to miss this June

Wanted Online: Art and about: Five local exhibitions not to miss this June