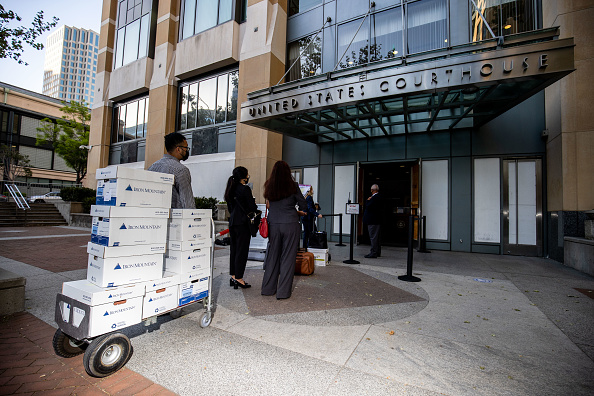 A member of Apple's legal team rolls a cart with documents while entering federal court on 4 May 2021 in Oakland, California. Picture: ETHAN SWOPE/GETTY IMAGES

San Francisco — With billions of dollars up for grabs, neither Apple or Epic Games will get what they want out of their court fight if the judge’s ruling embraces the concerns she voiced at the end of a three-week trial.

US district judge Yvonne Gonzalez Rogers said she is sceptical that the iPhone maker’s App Store allows for any “real competition” — the issue at the heart of the case — and also questioned Epic’s motives in suing to upend the App Store business model, implying it could help turn the Fortnite game maker from “a multibillion-dollar company into maybe a multitrillion-dollar company”.

That leaves a lot of middle ground for the judge to shift the power dynamic in the $142bn market for mobile applications in a way that gives Epic and other app developers a bigger slice of the revenue flowing to the world’s most valuable company.

Testimony at the trial revealed the stakes are high for both companies as the judge weighs options that range from leaving the App Store undisturbed to forcing a radical overhaul of its policies that would allow more outside competition. Fortnite, the blockbuster game that Apple removed from its store in August, generated more than $5bn for Epic last year. The App Store, by some estimates, takes in more than $20bn a year for Apple with a profit margin north of 75%.

Gonzalez Rogers said on Monday after the companies presented closing arguments that she will rule as soon as possible while all the issues are fresh in her memory, but didn’t specify a date.

Besides its immediate effect on the companies, the judge’s ruling could spur action from the US justice department and other global regulators examining the extent of Apple’s power as a gatekeeper to the digital economy.

Here’s how some outcomes of the trial could play out:

Legal experts gave Apple the advantage heading into the trial. But a complete victory for the iPhone maker looked less certain during the judge’s sharp questioning of CEO Tim Cook, when Gonzalez Rogers voiced scepticism about Apple’s argument that the benefits of its tight controls on how apps are vetted and marketed outweigh Epic’s antitrust claims.

The judge hinted that she was searching for a compromise around the idea that iPhone users should have the option to buy lesser-priced virtual goods and content directly from developers.

Gonzalez Rogers could “fashion something that doesn’t give Epic everything it wants but it could be something that’s less restrictive and gives Epic a partial win”, said David Kesselman, a Los Angeles-based antitrust litigator who’s not involved in the case.

Whatever Gonzalez Rogers decides, an appeal to a higher court is all but certain. The judge said during the trial that she wanted to build out a clear record of all the evidence as she expects an appeal after she rules.

The judge “has a lot of power but ultimately this case will get appealed at the ninth circuit”, Kesselman said.

The suit was filed a week into a US trial over Epic Games’ claims that Apple is running its store like a monopoly, cheating developers and consumers
Companies
1 month ago

MICHAEL FRIDJHON: Local handmade statement wines can vie for a place at the ...

MICHAEL FRIDJHON: Local handmade statement wines can vie for a place at the ...