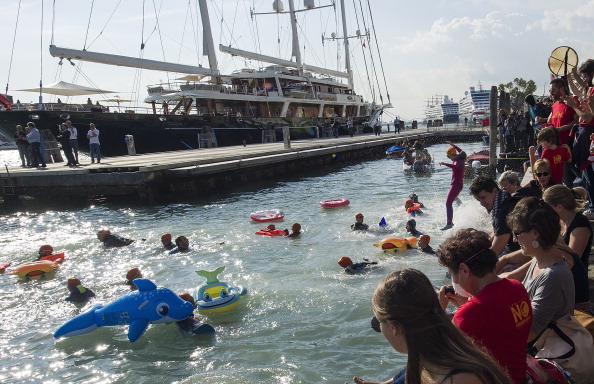 Protesters who are opposed to cruise ships crossing the St Mark’s Basin swim in the Giudecca Canal in Venice, Italy to block a cruise ship inside the port during a protest in 2013. Picture: MARCO SECCHI/GETTY IMAGES

On April 12, activists in Juneau, Alaska, filed paperwork to limit cruise traffic to the city’s picturesque port, where more than 1.2-million passengers disembarked in 2019. When cruising returns, it’s expected to host about 620 ships, bringing more than 1.3- million to the last frontier state.

The citizens argue that many passengers coming ashore during the summer season changes the way of life in the city of 32,000. Ideally, they say, they can maintain a quality of life, keep the city as an attractive destination for overnight visitors, and maintain some (but not all) cruise tourism opportunities.

Why now, after so many years of a booming cruise business? Locals say the pandemic shutdown has made them aware of exactly how beholden the city is to cruise lines, which pump about $1.3bn in direct spending into the Alaska economy, and millions locally. Absence, in this case, has not made hearts grow fonder.

But Juneau isn’t alone. Destinations ranging from Bar Harbor, Maine to the Cayman Islands are using the pandemic to pivot away from mass cruise tourism, which, opponents say, clogs streets, stresses infrastructure, and threatens delicate coral ecosystems that provide natural buffers against hurricanes.

In most places it’s a steep hill to climb. After years of back-and-forth decisions, the Italian government in late March greenlighted a ban on large ships sailing through the Venetian Lagoon. The concern there is over protecting the cultural heritage, given the increased risk of flooding around St Mark’s Square whenever a cruise ship pulls into the harbour. To solve this problem, big vessels will be indefinitely rerouted to nearby Marghera, an industrial port on the mainland. But that change will take place only when the facility there is ready, leaving Venice preparing for yet another summer of big ships.

Florida governor Ron DeSantis is suing the US Centers for Disease Control and Prevention over what he says is an unfair shutdown of the cruise industry — a suit that last week was joined by the state of Alaska — but his constituents in Key West are moving in the opposite direction. In November they passed a cruise ship referendum capping the number of daily cruise ship passengers at 1,500 and giving docking priority to ships with the best health and safety records.

The new rules effectively will eliminate visits from major lines such as Carnival Cruise Line, Disney Cruise Line, Norwegian Cruise Line, and Royal Caribbean International, whose ships generally exceed that passenger count. Pre-pandemic, almost a million cruise visitors would arrive at Key West every year, representing about one-third of the city’s tourists. That number is set to shrink dramatically. 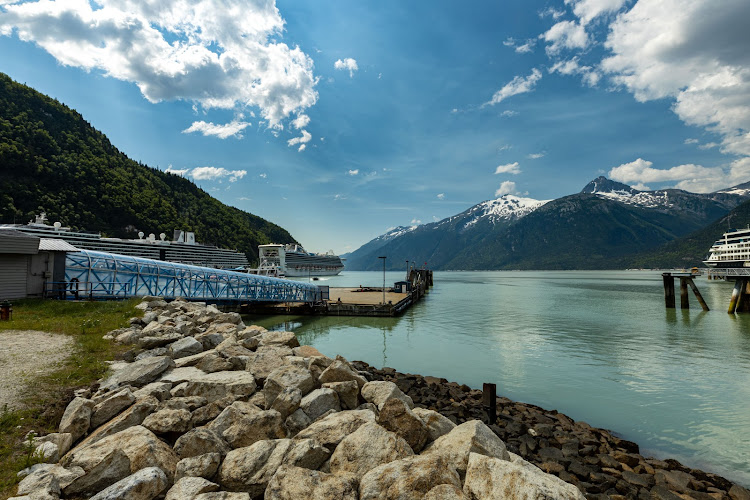 A cruise ship in the harbour of Skagway in Alaska in 2019. The small town would like to boost cruising as it is the main income generator for locals. Picture: 123RF/HECKE

One argument from cruise-limiting proponents is that cruise passengers spend an average of $72 a day in port whereas overnight visitors to Key West shell out $620 a day. The cruise industry — via the Cruise Lines International Association — argues that passengers spend more per hour of time they’re on shore.

Key West has set a model for other cities to follow. In Juneau, activists are collecting signatures to add cruise-related questions to the ballot for the October 5 municipal election. The three proposed amendments would ban ships with more than 250 passengers daily between 7pm and 7am and all day on Saturdays, as well as banning ships that weigh more than 100,000 gross registered tonnes after 2025. As in Key West, this would ban most ships from major lines, while putting more pressure on overnight, land-based tourism to make up the difference in revenue.

A similar story is playing out in sleepy Bar Harbor, Maine’s most popular cruise port. Pre-pandemic, the fishing town of 5,600 was expecting 300,000 passengers a year for the summer and autumn season. Late in 2020, citing downtown congestion and its effect on local culture, the town council took steps towards setting limits by making plans to research local sentiment and discuss whether cruise limitations should appear on the June 2021 town meeting warrant.

The Cayman Islands, which has a ban on cruise traffic until at least 2022, is also reconsidering its long-term strategy. In surprise comments in February, amid an election campaign, then premier Alden McLaughlin pulled back support for a new $200m cruise dock in George Town. Instead he discussed limits on cruise ships when they return and suggested that medical tourism might be a way to fill any gap.

As a hub for international banking, the Cayman Islands is not as dependent on cruise tourism as some of its neighbours. Still, it ranks as the Caribbean’s fourth most-visited cruise destination, and before the pandemic it was expecting 1.9-million cruise visitors in 2020. Now that industry’s fate will lie with the newly elected premier, Wayne Panton, the country’s former environment minister.

Two sides of the coin

Not all caps are voluntary, though. The tiny gold-rush town of Skagway, Alaska (population 850) would like to boost cruising — it’s the main income generator for locals — but it doesn’t have the infrastructure, or the means to fund such improvements.

In 2020 no cruise ships visited Skagway. A ban on cruises in Canada until February 2022, coupled with US cabotage laws (which deal with trade or transport in coastal waters), appears to have scuttled the season for a second time. In total the city’s businesses lost $160m in revenue in 2020, says mayor Andrew Cremata.

“Our waste treatment facility is maxed out, and it can’t handle any more. And the cost to build a new facility is $15m-$30m,” he says. “People say they want more cruise passengers, but a daily cap limit is sometimes dictated by things out of our control.”

Even in an ideal world where ships could come more frequently, Cremata isn’t concerned about anti-cruise activism bubbling up in his town.

“We love the cruise industry, and we’re good at it,” Cremata says, adding that his residents don’t mind the noise that comes with swells of visitors. “In winter we enjoy the quiet. In summer we enjoy the chaos.”

Bloomberg News. For more articles like this please visit  Bloomberg.com.

Cruise lines are hoping that by the time their distant itineraries set sail, Covid-19 will not be an issue
Life
2 months ago
Next Article

My Brilliant Career: How an early love of books led to a career in concrete

My Brilliant Career: How an early love of books led to a career in concrete