‘Aha’ moments light up Joburg’s past

UPDATED 22 October 2019 - 16:11
Discover some of Johannesburg's colourful past as you gather around the bar area of Zwipi Underground. Picture: SANET OBERHOLZER

I find myself in an underground vault in Johannesburg on a Friday night, fairy lights glistening around me and a sharp curiosity in the air. Tables are set up in a series of rooms that flow one into the other, each revealing another hole in a mysterious labyrinth.

I make my way to a moody bar. About 20 other people — some local, some foreign — gather around the room with checkered floors and vintage green tiled walls, our excitement palpable. We have each come from our little corners of the world for an underground migrant cuisine storytelling dinner hosted by JoburgPlaces.

The initiative of Gerald Garner, JoburgPlaces grew out of the publication of Garner’s book Spaces & Places, later republished as JoburgPlaces. Initially intended to offer visitors tips for visiting the city of Johannesburg, Garner started offering tours after being approached by a corporate company in 2011.

What started as a small walking tour company has grown significantly. Since offering his first unplanned tour of the city, Garner has welcomed chief storyteller Charlie Moyo and chef Princess Bulelwa Mbonambi to the team. Together they have taken 28,000 people on tours and dinners in Johannesburg’s inner city. 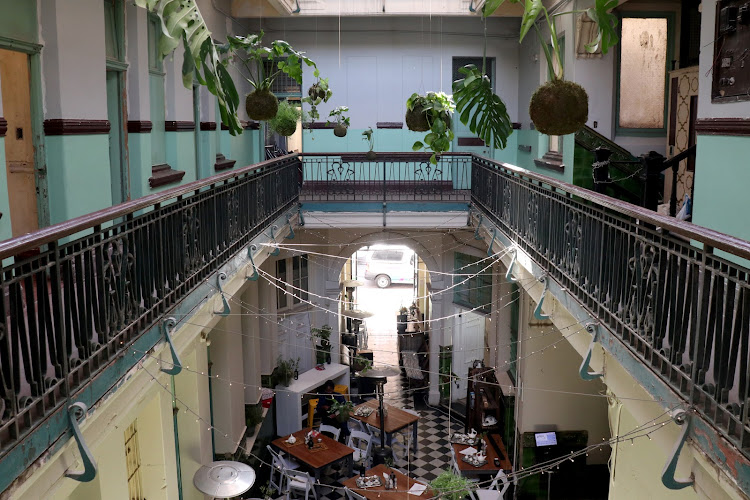 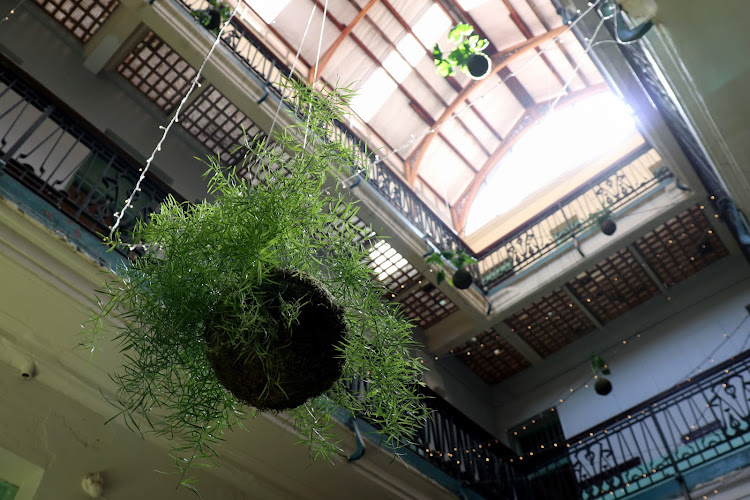 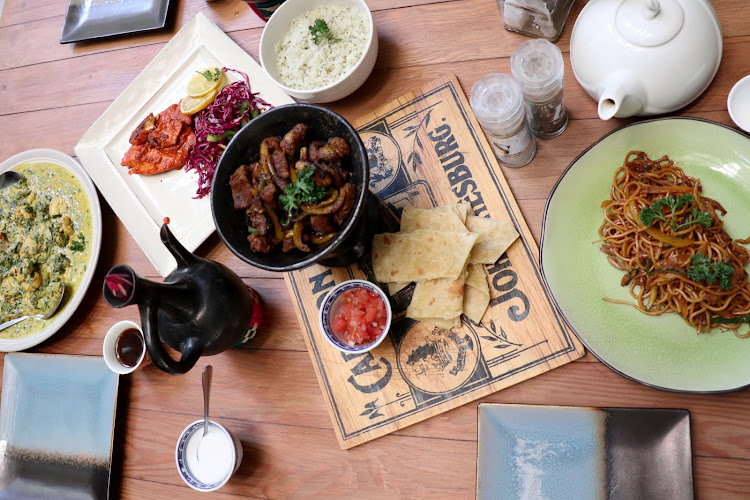 About a year ago they moved into their new home on Ghandi Square. It is at this time that Mbonambi joined the team with the start of their underground storytelling dinners held in their Zwipi Underground venue.

Moyo takes us on a journey of Joburg’s migrant history, infusing colour with both heartbreaking and beautiful tales of humanity and anecdotes of people in Johannesburg he knows personally, from the business owner in the Ethiopian Quarter teaching him French to the 106-year-old Chinese lady that still owns and works in her shop.

He paints the picture of a Zimbabwean migrant who finds love and a new family in the city of gold after making the move from his home country in search of opportunity. Drinking at his local shebeen after a gruelling week working on the mines, he gathers the courage to speak to a beautiful woman. After buying her a drink, he soon he tells her about his longing for his mother’s food and she invites him over to cook him Zimbabwean sadza — the first main served as part of a six-course meal, each borrowing from a different wave of migration in Johannesburg’s history.

Before being served our second main of Mozambican carapau, Moyo recounts how one woman who attended a storytelling dinner was reduced to tears as he spoke about the 20-24 decree of 1975 issued by former Mozambican president Armando Guebuza, then interior minister, that gave the Portuguese in Mozambique 24 hours to leave the country with no more than 20kg of luggage — ushering in a wave of Portuguese migration to SA.

This lady remembered going to Park station as a little girl with her parents to pick up any lost, Portuguese-speaking people to take them home and offer them shelter. As a grown woman she still remembers the utter desperation of the people they assisted to establish lives for themselves in SA.

The Rand Club polishes its silver to draw former plebs

In an effort to remain relevant and financially viable, the Rand Club recently opened its doors to non-members for lunches, dinners and high teas ...
Life
1 year ago

The food is scrumptious, but when combined with the stories, it becomes an entire experience, from the Chinese dumpling and Cape Malay soup served as starters, to the Mango Lassi with a twist of vodka and Bakalava as dessert.

“I always looked at Joburg the same way people look at it as this city that doesn’t make sense until I understood the story behind it. I’m fascinated. I’m out there trying to understand it more and more every day. So when I wake up in the morning my thing is I need to discover something new about the city,” says Moyo.

The building that now houses JoburgPlaces was built in 1904. It was called Somerset House then and it was built for the United Building Society, which was a bank that offered home loans and savings deposits.

This is the only remaining arcade building of the early 1900s and originally it had a high-ceilinged glass roof. Its architecture straddles the opulent Edwardian and delicate Victorian eras. The steel balconies that extend above our heads were built to last.

I always looked at Joburg the same way people look at it as this city that doesn’t make sense until I understood the story behind it.

The building itself has so much heritage value that it’s an attraction in its own right.

“It’s a beautiful place to tell people the history of Johannesburg,” says Garner. When they moved in, the team decided to rename the building and called it the “Thunder Walker”, a name inspired by a poem Garner wrote about a city of migrants.

Given the space and potential of the building, they decided to develop four separate venues. Zwipi Underground, the downstairs bar and restaurant where the storytelling dinners are held, opened officially in December last year. Scatterlings Restaurant, with its migrant teahouse concept was launched in August and the team hosted their first wedding in their new Town Square Banqueting Hall at the beginning of September.

The next phase of development for JoburgPlaces is Balcony Gardens Boutique Hotel, which Garner says they hope to finish in 2020.

“What we’re doing there is taking the old office spaces and turning them into really beautiful, modern, trendy apartments.”

Scatterlings Migrant Tea-House, though very different to Zwipi Underground, is equally special. It doesn’t offer the formal dining you will find downstairs but you can still expect tasty food inspired by migrant cuisine. The chicken chow mein will surpass most versions found in takeout joints around the city and the Mozambican matapa featuring prawns lavished in a coconut milk sauce will make you long for the cuisine of a place you have never visited. 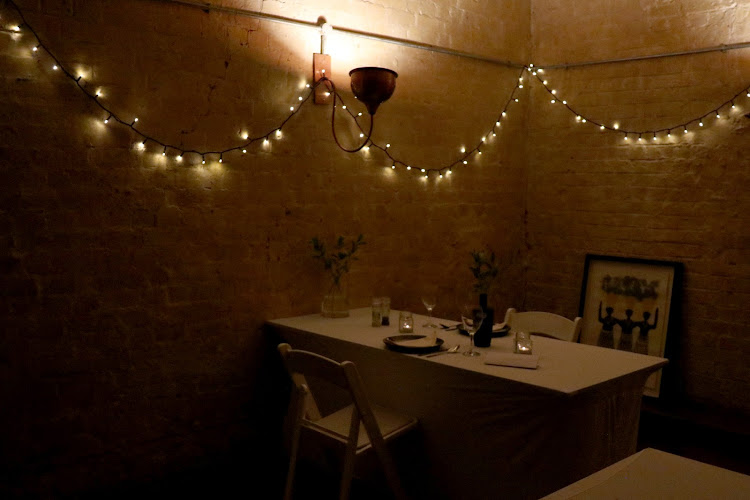 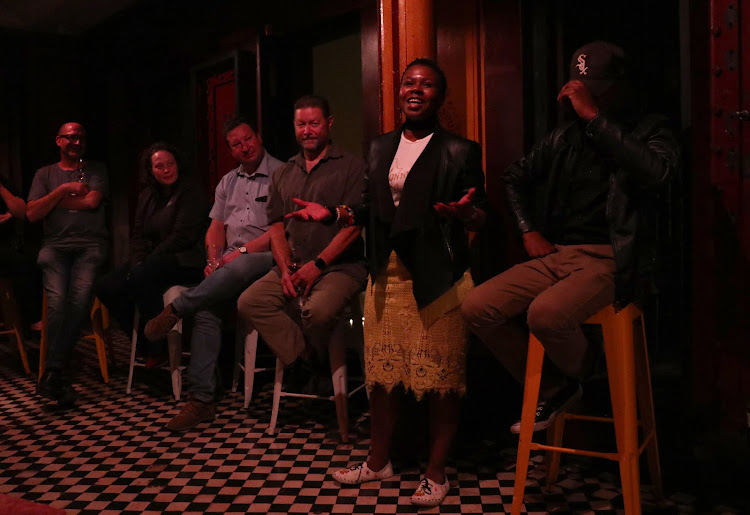 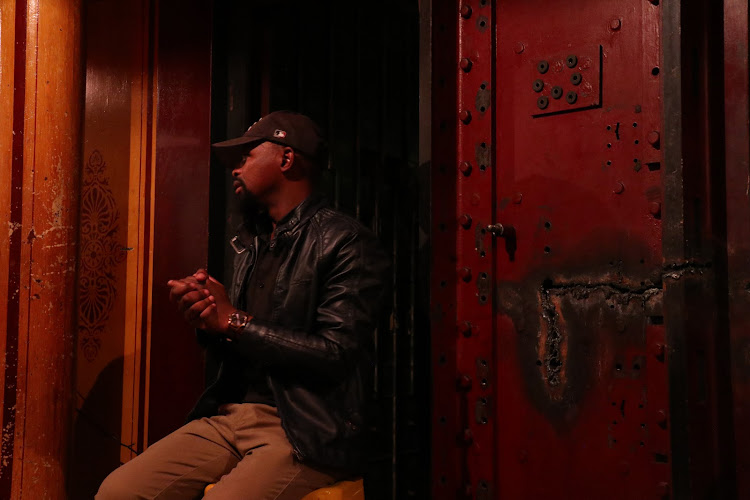 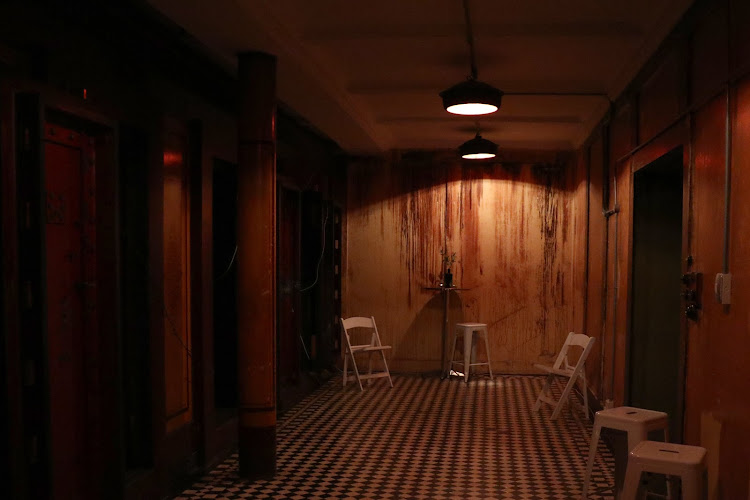 While Mbonambi draws inspiration from food she finds on the streets of Joburg, she puts her own spin on it, her ethos being not to copy but to take inspiration, as evidenced in her seeded nut-free version of baklava.

Mbonambi says their tours are vital, more than the food and the opportunity to visit such a historic building.

“All the history we learnt in school and that we read in books sometimes really doesn’t make sense and you cannot connect all the dots, but coming on a tour such as this, everyone leaves with that ‘aha moment’. It’s vital to learn where we come from, which tells us where we are, which also tells us where we are going.”

When they occupied the building, they found that of the 1,000 safety deposit boxes in the vault, only 40 are open. What’s inside the rest remains a mystery — the keys never having made their way to the hands of the numerous owners of the building throughout its layered history.

No doubt these boxes have their own stories to tell and as the team continues to run their tours, they discover new “aha moments” in unexpected places, such as the stories they often hear from people attending the underground dinners.

Princess Bulelwa Mbonambi, the chef behind the diverse menu you will find at the Thunder Walker. Picture: SANET OBERHOLZER
Image: Sanet Oberholzer

“As we walked downstairs, this man stopped moving,” Moyo recounts. They thought he was having a heart attack and asked him if he is all right.

“I’m quite all right. I used to work here — I know this place,” said the man. He explained that a prominent cut in a vault door was made during a bank robbery in 1978, solving the mystery of why the company making use of the vault at the time vacated the premises.

As I listen to these stories, I think back to the story Moyo told of a group of around 8,000 Zulu men, women and children who decided that they wanted no part in the impending Anglo-Boer War in 1899 and embarked on a trek home to Natal — on foot.

I think about this — my own “aha moment” in which I learnt about a piece of history I had no idea existed, a piece of history I find moving and profound — and I cannot agree with Mbonambi more. The history they are imparting and uncovering as they meet new people is evolving and living, filled with “aha moments” around unexpected corners that continue to inform us about where we come from 115 years after this building was built.

Experience your own adventure with JoburgPlaces

Visit www.joburgplaces.com for more information or to make a booking.

Rupert Goold’s film focuses on the singer’s run of London shows towards the end of her life.
Life
10 months ago

Playing powerful roles does little to save women from harmful representation

New research finds that sexism is still rampant in the film industry.
Life
10 months ago
Next Article

Vice snaps up Refinery29 in a push for bigger online audiences

The Mercedes CLS 53 is enough of an AMG dragon

Vice snaps up Refinery29 in a push for bigger online audiences

The Mercedes CLS 53 is enough of an AMG dragon