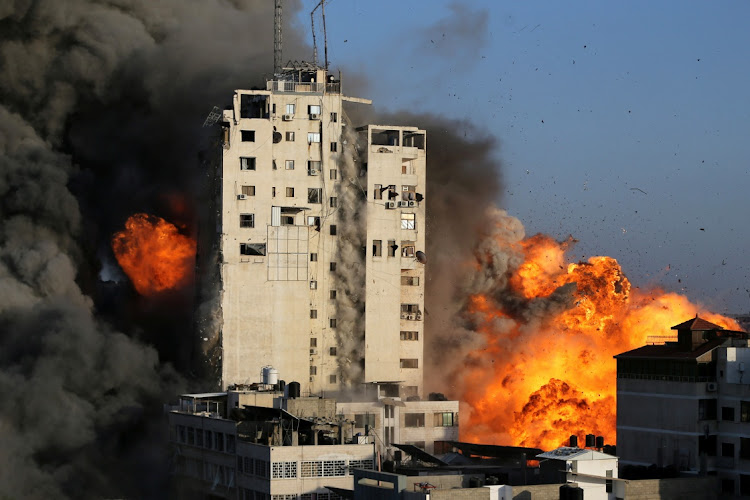 Smoke and flames rise from a building hit by Israeli air strikes amid a flare-up of Israeli-Palestinian violence, in Gaza City, May 12 2021. Picture: IBRAHEEM ABU MUSTAFA/REUTERS

Fierce clashes between the Israeli military and rocket squads in the Hamas-ruled Gaza Strip spurred a concerted diplomatic push to end the most serious fighting to convulse the area since a 2014 war.

The US dispatched an envoy to the region, and Palestinian media reported that Egypt and Qatar are also involved in mediation efforts, as relentless Israeli air raids and Palestinian rocket barrages sent the death toll climbing. Fifty-six Palestinians have been reported killed in Gaza and six people in Israel since the violence abruptly exploded on Monday.

“Images that came out overnight are harrowing and the loss of any civilian life is a tragedy,” US secretary of state Antony Blinken said Wednesday. “I’ve asked deputy assistant secretary of state, Hady Amr, to go to the region immediately to meet Israeli and Palestinian leaders.” Blinken spoke by phone with Israeli Prime Minister Benjamin Netanyahu and told him it was “vital now to de-escalate”.

Russian foreign minister Sergei Lavrov said on Wednesday that a meeting of four international mediators — Russia, the US, the UN and the EU — for resolving the intensifying  conflict is urgent.  Lavrov was speaking at a joint briefing with UN secretary-general Antonio Guterres after talks in Moscow.

“And we trust the secretary-general as the co-ordinator of the quartet,” he said, adding the meeting should be presented by the top diplomats of the four parties. The group was established in Madrid in 2002.

The UN Security Council scheduled a second emergency session on the crisis for Wednesday.

Netanyahu  warned that “Hamas will pay a very heavy price for its aggression”, and a torrent of air strikes followed, targeting military facilities, buildings used by the Islamic militant group, and key intelligence and military commanders.

Israel reported in excess of 1,000 rocket strikes, including a new night-time barrage in response to the assassination on Wednesday of a group of Hamas military commanders and the bombing of an evacuated building that housed offices of Hamas and the Islamic Jihad militant group. Hamas said more than 550 government and residential buildings had been targeted in Israeli raids.

Netanyahu warned that other senior militant commanders would be targeted for assassination. “It’s only the beginning,” he said at a Tel Aviv-area hospital where some of the Israeli wounded had been taken. “We will strike at them in ways they never dreamed of.”

Military spokesperson Lt-Col Jonathan Conricus told reporters in a briefing that preparation for a ground manoeuvre “is not where we are at this stage”.

The hostilities spilt over from weeks of clashes between Israeli security forces and Palestinians in contested Jerusalem. The holy city, home to Jewish, Muslim and Christian shrines, lies at the heart of the Israeli-Palestinian conflict, and competing claims to it have underpinned the latest confrontation.

The violence has set off a wave of protests by Israeli Arabs in support of the Palestinians, and unprecedented clashes with Jews and destruction of property in several cities.

A curfew was imposed on Wednesday in the central city of Lod, where Jews and Arabs live in a mixed community, after Arab assailants set synagogues, shops and cars on fire after the killing of an Arab resident by a Jewish man.

Israel and Gaza have skirmished repeatedly since Hamas took control of Gaza in 2007, and have fought three wars, the last of which was seven years ago.

The current round has roots in tensions that have been festering since the beginning of the Muslim fasting month of Ramadan in April. Israeli restrictions on gathering at a traditional Ramadan meeting place outside Jerusalem’s Old City touched off the unrest, but after they were lifted, protests were rekindled by the threatened evictions of Palestinians from longtime homes in the eastern sector of the city that Israel captured in 1967. The Palestinians and much of the international community consider east Jerusalem occupied territory.

Fighting is flaring at a time when Netanyahu’s rivals are trying to piece together a government after the fourth election in two years, and it has already impeded those efforts.

Mansour Abbas, head of the Islamist United Arab List faction, froze negotiations to join that potential coalition, citing the ongoing conflict. The lethal surge in violence has made it untenable for Abbas to join a Zionist-led government at this time, but he told Israel Radio on Wednesday that he’ll go back to talks once the fighting is over. With Reuters

‘We have lost control of the city and the streets,’ Lod mayor after several nights of violent confrontations between Arab and Jewish Israelis
World
5 months ago