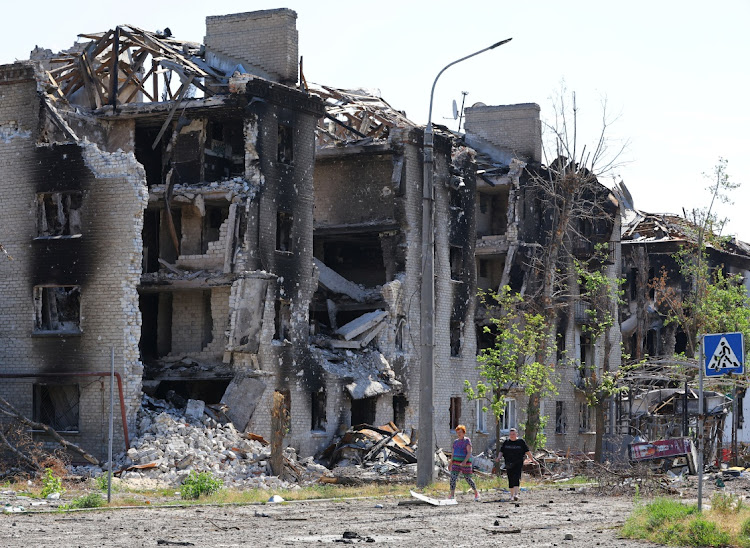 Residents walk past flats destroyed during the Russia invasion of Ukraine, in the city of Sievierodonetsk in the Luhansk region, Ukraine, June 30 2022. Picture: ALEXANDER ERMOCHENKO/REUTERS

Russia said on Sunday its forces and their allies had taken control of Ukraine’s eastern Luhansk region, after capturing the final Ukrainian holdout of Lysychansk, though Ukraine has yet to comment after reporting heavy fighting there.

Moscow-backed separatists have been fighting in the area since Russia’s first military intervention in Ukraine in 2014.

Russian defence minister Sergei Shoigu informed President Vladimir Putin that Luhansk had been “liberated”, the defence ministry said, after Russia earlier said its forces had captured villages around Lysychansk and encircled the city.

The minister said Russian forces and their allies in the area had “gained full control over the city of Lysychansk”. 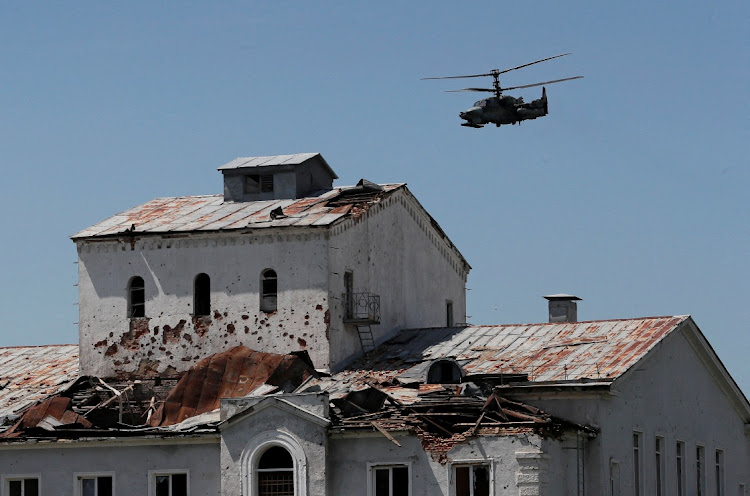 A Russian Ka-52 attack helicopter flies near a heavily damaged building in the town of Popasna, in the Luhansk region, Ukraine, June 2 2022. Picture: ALEXANDER ERMOCHENKO/REUTERS

“Ukrainian forces likely conducted a deliberate withdrawal from Lysychansk, resulting in the Russian seizure of the city on July 2,” analysts at the Institute for the Study of War, a Washington-based think-tank, wrote in a briefing note.

They based their assessment on footage showing Russia forces walking casually in northern and eastern neighbourhoods of Lysychansk, saying it suggested few or no Ukrainian forces remained. It said the footage included images posted on social media and geolocated to confirm where it was filmed.

“The Russians are strengthening their positions in the Lysychansk area, the city is on fire,” Luhansk governor Serhiy Gaidai had written on the Telegram app before Russia announced its advance. “They attacked the city with inexplicably brutal tactics.”

Thousands of civilians have been killed and cities levelled since Russia invaded, with Kyiv accusing Moscow of deliberately targeting civilians. Moscow denies this.

Russia says what it calls a “special military operation” in Ukraine aims to protect Russian speakers from nationalists. Ukraine and its Western allies say this is a baseless pretext for its flagrant aggression that aims to seize territory. 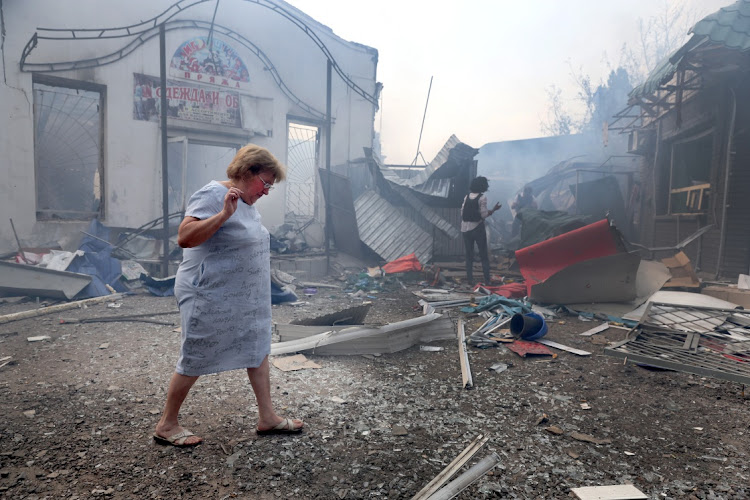 A woman walks through the rubble after a missile stuck a shopping mall in Sloviansk, Ukraine, July 3 2022. Picture: SCOTT OLSEN/GETTY IMAGES

Russia also reported explosions on Sunday in its city of Belgorod, about 40km north of the border with Ukraine, that killed at least three people and damaged and destroyed homes.

Russian regional governor Vyacheslav Gladkov said on Telegram that five homes were destroyed in the city and at least 11 apartment buildings and more than 30 houses were damaged.

“The sound was so strong that I jumped up, I woke up, got very scared and started screaming,” a Belgorod resident said, adding the blasts occurred around 3am.

Moscow has accused Kyiv of numerous attacks on Belgorod and other areas bordering Ukraine. Kyiv has not claimed responsibility but says such incidents are payback, after Russia has pounded Ukrainian urban areas into rubble.

There was no immediate comment from Ukraine on the latest Belgorod incident. Reuters could not independently verify the Russian accounts.

In the Russian-occupied southern Ukrainian city of Melitopol, Ukrainian forces hit a military base with more than 30 strikes on Sunday, the city’s exiled mayor Ivan Fedorov said in a video address on Telegram.

He said the base had been “taken out of action”.

A Moscow-installed official said several private residential houses near the airfield were damaged, but there were no casualties.

The general staff of Ukraine’s armed forces said its air force had flown about 15 sorties “in virtually all directions of hostilities”, destroying equipment and two ammunition depots.

Russia’s defence ministry also said on Sunday it had struck military infrastructure of Kharkiv, a city in northeast Ukraine where Ukrainian forces have been digging in and building concrete fortifications after nightly shelling, a Reuters reporter said.

Dozens of civilians have been wounded or killed in the region in recent weeks.

Far from fighting in the east and close to another front in the south, Russia said it had hit army command posts in Mykolaiv near the vital Black Sea port of Odesa, where the mayor on Saturday had reported a number of powerful explosions.

“The Russian occupiers are launching systematic rocket attacks in the direction of Mykolaiv,” Ukraine’s general staff said on Sunday.

As many as 811-million go to bed hungry every night, according to the World Food Programme
News
1 month ago